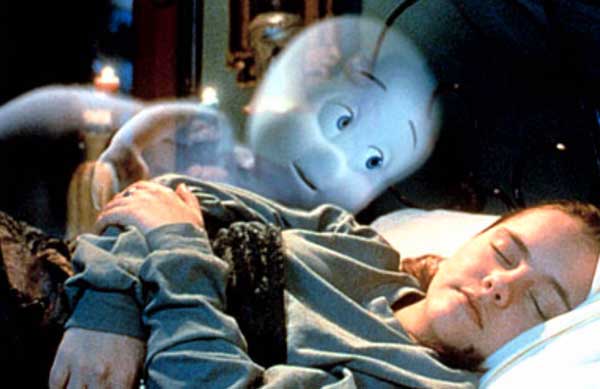 He’s the friendliest ghost you know. No, not Patrick Swayze – Casper, The Friendly Ghost. Though grownups might / Look at him with fright / The children all love him so.

Bill Pullman is Dr. Harvey, a paranormal expert, hired by Cathy Moriarty to exorcise a mansion she has just inherited. Dr. Harvey and his teen-demographic daughter Kat (Christina Ricci) move in, and soon discover three mischievous ghosts – The Ghostly Trio: Stretch, Stinkie and Fatso (voiced by Joe Nipote, Joe Alaskey and Brad Garrett), and their round-headed nephew Casper (voiced by Malachi Pearson), who wants to be their pal. The ghost effects are very well realized: they are three-dimensional yet see-through, and the filmmakers have captured well the form and personality of the Ghostly Trio; they’ve even found a perfect effeminate yet not-gay voice for Casper, and – like SPIDER-MAN – his head roundness is Just Right.

Hijinks ensue, with lots of slapstick, lightning-fast sight gags, and questionable eye-lines. Ricci and Pullman (and other humans, whom the ghosts call “fleshies”) are really onscreen, but all the ghosts are CGI, while the physical environment (curtains, doors, bedposts, paintings, food, glass, etc.) is a combination of CGI and practical effects. It’s an entertaining diversion, and should keep the kiddie demo happy through your afternoon nap.

Since his creation by Seymour Reit and Joe Oriolo in the 1945 cartoon THE FRIENDLY GHOST, Casper’s whole gig has been to seek out a friend who is not terrified by his ghostliness. Nothing’s changed, as Kat arcs toward trusting and loving Casper. And maybe even… desiring him? [Get your mind out of the graveyard gutter, Poffy!]

For example, the ghosts can touch physical objects when they want to, and can be affected by physical objects like plungers, doors and vacuum cleaners, can eat food (which goes directly through them and falls to the floor), or can choose to become incorporeal enough to float through everything. Casper can carry plates, cook breakfast, open doors, pull levers forcefully, become a cushion beneath Kat’s fall, yet when he wants to touch her in that way, his hand melts through hers. Oh, tragic!… Hey ghost, use that same willpower you use to pull levers and you’ll be honking those hooters in no time! (Oh, are the kids still here? I just meant playing choo-choo with her, kids!)

Why does Casper want to bed her anyway? Are you telling us, Movie, that his ghost form is producing spermatozoa that seeks release into a uterus? Maybe the movie is telling you that it’s time to have THAT Talk… 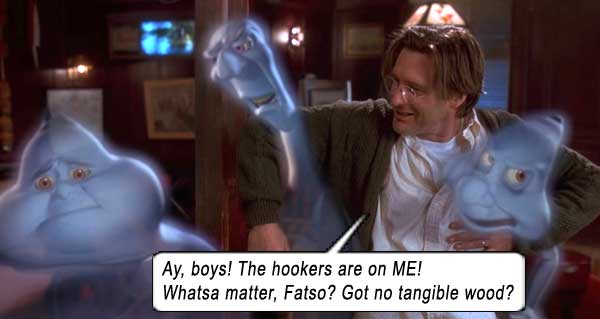 The funniest sequence by far is a cannonade of cameos, when Pullman looks into a mirror and sees – Clint Eastwood looking back (who satirizes his recent UNFORGIVEN by threatening, “I’m gonna kill you, your mama, and all her bridge-playin’ friends!”), who morphs into Rodney Dangerfield wisecracking, and then into Mel Gibson, who says nothing, just admires his pretty mug. Not all the cameos are commendable, as Eric Idle makes a fool of himself in a small role; it’s nowhere near horrible, but it’s nowhere near Python.

Throughout his history in media, the question of Casper’s death was swept under the carpet, considered too morbid a subject for his young audience. Here, writers Sherri Stoner and Deanna Oliver (and director Brad Silberling) create a pre-death history for “Casper McFadden,” so that he can desire to be his real self once more to touch Kat in that way, who by now is creaming her teen jeans aching for his ectoplasmic sheet-flute. (Kids, don’t ask your parents about what I just said.)

If you contemplate some of the life/death events here, you realize how morbid this topic can be for youngsters. (Or maybe the movie is suggesting that now might be a good time to talk to your kids about grandma’s imminent demise?…) Cathy Moriarty dies and comes back as a ghost, until she is tricked into “crossing over” to the other side. “What is ‘other side’?” ask the muslim children. Then Dr. Harvey dies, comes back as a cartoony ghost, and is resurrected by Casper’s Lazarus Machine, which he was going to use to turn himself into a real boy to touch Kat in that way. That’s downright horrifying! Where’s his physical body going to come from? The grave? Decomposed and worm-ridden? I mean, we’re talking zombies here, mormon children! I guess it’s no more horrifying than the story of Jesus, the second resurrected christian zombie (after the actual Lazarus).

Dr. Harvey’s dead wife (Amy Brenneman) also visits as a ghost in the finale. (We wonder why she appears in human form, and not cartoony, like every other ghost. Oh, it’s because she’s an angel! “That’s how we want grandma to be!” chime the evangelical children. What are the rules again? Don’t have any. Uh, okay, onward.) For sacrificing his chance to be alive by resurrecting Dr. Harvey, his wife grants Casper the wish to be human – only until ten o’clock. It’s a gruesome fate, probably more painful than not turning real at all. And then Casper blows it by getting just one timid kiss in. (And by the way – how does Dr. Harvey’s wife have the power over life and death?! Isn’t that God’s provenance? ask the christian children.)

A more suitable denouement might have been: let Dr. Harvey remain dead! He could have been with his wife! Then Casper could have become a real boy, as he and Kat have their lives ahead of them. It’s win-win! By now there’s so much living and dying going on, I’ve lost track of the zombie-muslim-scientology-pagan message. I guess they wanted to meld Pinocchio and Cinderella, and then make sure there was a curfew, so that all good teen ghosts tuck it back in their sheets.