Halle Berry brings her cat scratch fever to bear upon corporate villainy and meddling-cop lovers alike in CATWOMAN, with the style of an Egyptian priestess oozing Western sadomasochismo; a puss in boots by any other name.

Strictly Felis silvestris, no doggy-style for this feline. 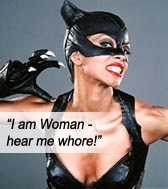 She is “resurrected” by a cat breathing on her… though it may be hard to believe that the movie’s four screenwriters could concoct nothing more plausible, it is revealed that this particular feline has been spitting up hairballs since Cleopatra’s reign and has “chosen” Patience for her… uh, latent nymphomaniacal abandon, it would seem – to be the superhero/antihero for Generation Y.

And before your head explodes over the idiocy of the premise, let’s put it all in purr-spective (sorry!). In a superhero-conscious society, where a guy can be bitten by a radioactive spider and then walk up walls, or where a guy from a technologically advanced civilization like Krypton (with fashion sense that has not advanced beyond 1972 Gay Mardi Gras – candy-apple-flaming underpants over sky-blue leggings? – girl, puh-lease!) can be accepted with straight faces, this “cat-breath” contrivance is almost rocket science.

Sensually clobbering bad guys and good guys alike, in her quest to beat out Jenna Jameson as the World’s Biggest Whore, Catwoman uncovers Laurel’s plot to Take Over The World via the diabolical tool of women’s makeup! (Yes, four screenwriters…) Prompting her into using her whip (insert joke here), getting down on all fours (take down trousers here), licking people (touch oneself here) and using double entendre like she’s getting paid by the pun (slap the screenwriters for ruining it for you).

Talented comedienne Alex Borstein (MAD TV, FAMILY GUY) plays the unfortunate cliché Fat Chick “Friend of the Hot Chick” (bane to clubbers the world over). But in Hollywood parlance, Fat Chicks are as far removed from real-life clubber cock-blockers as Lesbos is from San Francisco, these plump sidekicks quivering with instant publicized arousal whenever a human male hoves within farting distance. And – in a movie that squeals its emasculation with Berry’s every half-naked pirouette and erotogenic self-licking display – Benjamin Bratt plays The Chick.

Where is your god now, MPAA?

Though many would criticize this piece of trash for its dizzying editing, embarrassing dialog, banal storyline, distractingly-ludicrous special effects or wafer-thin characters, it is the underlying HYPOCRISY in “empowering” Womankind by simultaneously exploiting them that belittles the film’s aspirations.

And the rest of those things don’t help.

Not that it had too many aspirations, its main deal being securing thousands of soft-porn moments for Berry, hard-selling this product to drooling consumers waiting for a nipple shot which would never come. (Let’s face it, though: we saw Halle’s naked ta-tas in SWORDFISH and they were nothing to write home about.)

The film’s slippery grasp of its Woman Empowerment theme only served to highlight that women can’t have it both ways: if being forward about their sexuality is Empowerment, they should not stymie men being forward about theirs – yet any sexual signal from a man is considered Sexual Harassment at the woman’s prerogative; and if this movie represents a coup for women’s primacy, then it cannot possibly represent misogyny – yet the same factions who laud this as a blow to male supremacy will also whine about its feminine exploitation!

In the film’s final standoff between Catwoman and Laurel Hedare, it becomes obvious that the two most masculine beings in the story are women (business-wise and physically), the film-makers falling into the same paradoxical trap that all Woman Empowering rhetoric must claw its way out of – that women do not seek equality, but rather usurpation of Man’s role, thereby making them as slanted towards the preeminence of their sex as the men they rally against. (The unfortunate corollary is that in overcoming men on their own turf, they must adopt the traits of men – and “butch” and “macho” should be adjectives reserved for gay guys.)

With every man in this movie emasculated and pussified (Bratt seems decidedly put-out that he must pretend to nurse a wounded shoulder to keep him out of the movie’s climactic catfight), estrogen runs rampant as those 13-year-olds cheer the denigration of the gender that grants them these double standards in the first place.

It is those same double standards that the MPAA hypocritically defer to in granting this film its pornographic liberties.

Because Life, much like this movie, is all about the pussy.