For a successful technology, reality must take precedence over public relations, for nature cannot be fooled.
— Richard Feynman, “Report to Congress on Challenger Investigation 1986.”

When I first heard about the TV movie, THE CHALLENGER DISASTER, I shrugged it off, thinking it would be a shallow, politically-correct tribute to the people who died in the Space Shuttle Challenger’s 1984 post-liftoff explosion. Surely it would not be about the ensuing investigation into the disaster and surely it would go nowhere near one of my heroes, physicist Richard Feynman’s integral role in unveiling the mystery behind the explosion, and there wouldn’t be a chance in hell it would mention O-ring failures…

I was beautifully wrong. As it happens, this movie is all about my hero Richard Feynman, based on a section of his entertaining and informative book, What Do You Care What Other People Think? (1988), and delves deep into how Feynman alternately intuited and was fed cryptic info to unlock the mystery behind the Shuttle explosion due to O-ring failure! Movie portrays him as quite the hero – to which he himself would have reacted with utmost chagrin – as he doggedly pursues the truth against a political juggernaut where the word failure was not an option. 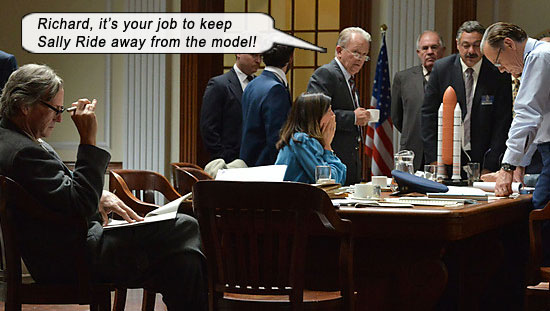 On January 28, 1986 (the 25th shuttle mission), Space Shuttle Challenger did not liftoff from Kennedy Space Center on just another routine mission, but on a public relations circus, crowing to the world the munificence of the American government and the progressiveness of the U.S. space program by including civilian schoolteacher Christa McAuliffe among its seven astronaut crew. 73 seconds after liftoff, the shuttle exploded, killing all onboard.

A Presidential Commission was quickly assembled to investigate, made up of bureaucrats, lawyers, astronauts (Neil Armstrong, first man on the Moon, and Sally Ride, first American woman in space), and for technical credibility, called on 1965 Nobel Prize winner for Physics, Richard P. Feynman.

The incomparable William Hurt stars as the iconoclastic Feynman, immersing himself in the role with his unkempt hair, earthy attitude and quirky dignity. (Feynman was an atheist – but his soul defiantly surfaces in Hurt.) Joanne Whalley is supportive wife, Gweneth. Feynman is hesitant at first to involve himself with Washington in any way for all its “political” obstruction – fears which are realized almost immediately when he arrives ready to work and the investigation committee seem committed to stagnating in bureaucratic quicksand. Feynman becomes the most outspoken and seems to be getting the most work done because he is the only true “independent” on the committee, as everyone else has affiliations with the institutions they are investigating.

Bruce Greenwood is General Kutyna, who is sympathetic to Feynman charging forward against difficult odds, who cannot reveal incriminating information himself due to his allegiance to the military and other astronauts, but who feeds Feynman clues without Feynman even realizing it, banking on Feynman’s brilliance to unravel his clues.

Brian Dennehy is Mr. Rogers, head of the commission and a born bureaucrat; at first, almost an opposing force to the truth, seemingly grinding the investigation into gravel when it wants to move forward. Later, he would verbalize the paradox the commission faced: “We have a major difficulty – the people who best understand the shuttle are the people giving evidence – but they have the most to lose by explaining it clearly.”

No one – not NASA, not the numerous contractors, not the government – wants to take any blame, yet no one wants to rat out their colleagues either. It makes everyone look bad, and not just to grieving Americans; to “enemies” of the United States who have a vested interest in the space program vis a vis the weapons program failing, and to those who simply wish to laugh in the face of the self-proclaimed greatest superpower on Earth.

At the time of the inquiry, Feynman was also battling liver cancer, spreading throughout his body and occasionally incapacitating him. There was nothing his doctor could do except stopgap dialysis.

Ultimately, cause of the Shuttle explosion was whittled down to the compromised “O-rings” – rubber seals that were supposed to expand to stop the outflow of gasses from the Solid Rocket Boosters, but which were affected adversely by extremely low temperatures on launch day. Due to the politics of NASA being forced to launch another Shuttle to retain their funding, they barged ahead with what they knew to be an unsafe condition. It was not a unanimous decision, and many techs gave evidence that they advised against the launch. Feynman was instrumental in pinpointing these factors during hearings, culminating in his now-infamous practical real-time experiment – performed while cameras were rolling and while sitting at his place on the panel – of putting an O-ring in his ice water to prove it was not resilient at cold temperatures.

I am so glad this movie was made. Up to now, scientists like Hawking, Sagan, Michio Kaku, have had their deserved time in the sun. But Feynman has been one of my heroes for years (unfortunately dying in 1988 before I really got to know him through his books), and he’s never really received his due from mainstream media. Now we see how respected and loved he truly was. There is even a new 2013 documentary, FEYNMAN: THE CHALLENGER, which breezes through Feynman’s life, work and philosophies, featuring many interviews with Feynman himself, narrated by none other than Bruce Greenwood. They keep calling Feynman “America’s most respected physicist.” Well then, give him a little more sugar, Hollywood bastards!

The tragic dichotomy here is that I have utmost respect and sympathy for NASA also. The organization is constantly misunderstood, maligned and defunded by the public and the government. After proving their utility in rocket science (i.e. weaponry), the United States didn’t have much use for them after the Apollo program. To avoid being discarded, they’ve had to prove time and again their credibility, even though sometimes they have nothing to offer the budget hawks except pure research. They even had to come up with a slogan, which they KNEW was unworkable in any real-world environment, to placate the whining government red-tapers: “Faster Cheaper Better.” (The rejoinder to that credo is as famous as the credo itself: That only two of those conditions can be achieved at the expense of the third; i.e. you can have it faster and cheaper, but it won’t be better, you can have it cheaper and better, but it won’t be faster, and so on.) After promising an unattainable quantity of Shuttle launches and under threat of their funds being siphoned to the military, they had to launch that cold day in 1986. With fingers crossed instead of 100% safety guarantees.

The deaths of the seven astronauts is as much to blame on the mouse-minded government as the officials at NASA who greenlighted the launch. May those responsible – you know who you are – take that burden to your venal graves.

As the credits roll, we see real footage of Feynman giving his O-ring testimony over his ice water. Giving a new meaning to super cool.

Sadly, this would be Feynman’s last adventure. Two years later, he would die of cancer.

After President Reagan is presented with the official Challenger report, with Dr. Feynman’s notes included as an Appendix, General Kutyna walks with Feynman. He laments and apologizes for the time Feynman had to spend away from his family, knowing he had so little time left, “This took your time…” Feynman, the atheist, the pioneer in quantum electro-dynamics (QED), philosophically replies, “I guess there is a kind of afterlife. The few bits and pieces that we do… might get remembered.”

Challenger Disaster
Live on CNN.
This amazing footage from a bygone time: no social media, no internet, just unblemished reality as it unfolded.

Note the disbelieving silence following the explosion, with the news anchor touting his shuttle knowledge in citing the “solid rocket boosters blowing away from the side of the shuttle” – before he realizes he should keep his civilian mouth shut because something ain’t quite right. Though the NASA comlink guy is steady-voiced, we know – we just know – that everyone, including him, must have felt that hot flush flop sweat.

Shuttle missions were, by this time, routine. Did we just see what we think we saw? Did the Space Shuttle actually explode and kill seven astronauts? It’s amazing to think what must have been going through everyone’s mind at this precise moment in time… not least, the minds of the astronauts, who were, it was discovered, still alive in the crew cabin, activating the emergency oxygen as they plummeted to the Atlantic. To no avail, as the crew cabin had no contingencies to alleviate a free fall separated from the main shuttle. They must have known the landing was going to kill them. Horrifying thoughts…

Credit where it’s due.
I find it offensive to the memory of the great Dr. Richard Feynman that he is not also credited as co-writer on this film, considering it is based on part of his book. (Typical Hollywood assholes: If the author is not alive – and if his estate doesn’t have power lawyers – fuck him.) 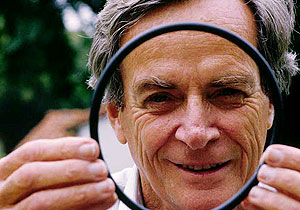 Only in the end credits do we see the other book this film draws from: Truth, Lies and O-Rings, co-written by Allan McDonald (also not credited as a writer), one of the techs who would not sign off on the safety of the mission. 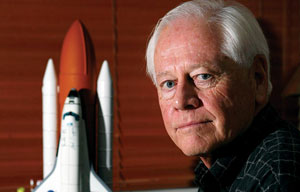