How many times have we seen this movie? THE CHANGE-UP is the latest mystical body-switching movie from the venal plagiarists in the Hollywood Cookie Cutter Industrial Complex who have the audacity to call themselves writers. At least it’s funny. 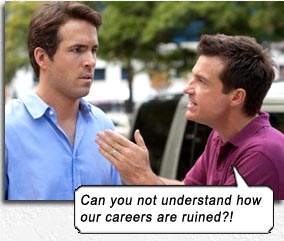 Mitch (Ryan Reynolds) and Dave (Jason Bateman) are best friends but lead diametrically opposite lifestyles – Mitch is a shiftless, profligate bachelor and aspiring soft-porn actor, while Dave is a driven, stable married lawyer with a wife (Leslie Mann) and three kids. While pissing in a fountain together one night, they wish for the others’ life and – switcho-plagiaro! – the next morning they each inhabit the other guy’s body. Of course, the same plot point applies here as with all these switcho-chango movies – the fountain is moved and the subplot is the quest to find it and change back.

Cue fish-out-of-water gags that are admittedly very enjoyable due to the talents of the players – and Leslie Mann’s milky, creamy delicious naked mammii and pear-shaped posterior. (She lets it all hang out here – I guess she’s feeling the sting of advancing age and wanting to show off her Aphroditean bod before it starts to sunset – and Judd Apatow must be outa town.) Alabaster-faced and flat-chested Olivia Wilde is the other sexy lady slinking around another subplot, to give the rogering bachelor a happy ending. Not in that dirty way either – in that insufferable Romantic Ending Protocol that idiotically makes every male desire marriage as an ideal destination.

Jason Bateman and Ryan Reynolds sell the movie – and each other. We can see both their personalities in each other, even though their comedic film personas are quite similar. It’s a constant amazement to me that in all these “body-switching” movies the switched protagonists are always so convincing as the other person. In LIKE FATHER, LIKE SON (1987), Dudley Moore and – surprisingly – Kirk Cameron made it happen; Jamie Lee Curtis and – surprisingly – Lindsay Lohan pulled it off in FREAKY FRIDAY (2003) (as did the remarkable Jodie Foster in the 1976 original); Tom Hanks shone as a boy in BIG (1988) and Zack Ephron shone as a man in 17 AGAIN (2009); back when Steve Martin was brilliant, he showed us two personalities in one body in ALL OF ME (1984) and the brilliant John Malkovich showed us John Cusack in his body BEING JOHN MALKOVICH (1999).

Up to this point, body-switching movies have been family entertainment (except for MALKOVICH), but CHANGE-UP is decidedly R-rated: lots of swearing, lots of tit-tays, imperiling infants, vulgarity maximus and Leslie Mann gloriously nude. The dynamic between the two men is original for these movies – Dave doesn’t want the rampaging Mitch to nail his wife, while Mitch is constantly trying to get the uptight Dave laid.

Leslie Mann does another great breakdown scene (a la KNOCKED UP) and we all feel like mothering her and her perfect body. She spends a lot of time complaining about husband Dave’s law practice taking all his time, but when he later confesses he’ll quit his high-paying job for her, she says, “I don’t want you to quit your job – you love your job and I love that about you.” Really? You forgot to mention that his job pays for all the hedonistic chick crap that you buy unthinkingly, pays the medical bills and the kids’ college funds; you forgot to mention that though he spends more time at his job than with you, that job bought the mansion that you spend your time complaining in about his job, while there are people starving downtown in your own city.

As with the plots of all these movies, each man must lead the other’s life for a time and will eventually come to an epiphany and a character adjustment. One realizes he enjoys the rigors and ritual of married life while one finds he can have a little fun without responsibilities holding him back. The issue of the bachelor nailing his friend’s wife is not spoken of after the first night, and we just know that no matter how much the married man will try to get laid in the bachelor’s body – it won’t happen, or his “inherently good character” will be compromised. Though CHANGE-UP is actually laugh out loud on the journey (we learn about the Cancer List (the girls you’d fuck first if your wife died of cancer), how to fuck a Catholic schoolgirl, the shape of each man’s penis, the incident with Leslie Mann’s vibrator…), but the Predictability Express hits every stop.