Haunting in Every Way. 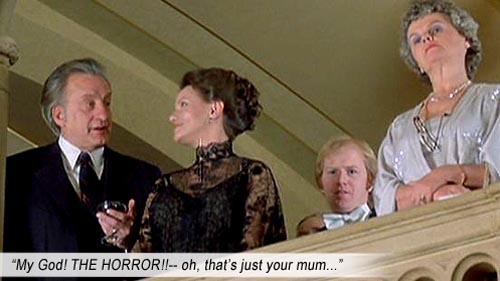 THE CHANGELING is one of the great classic haunted house stories, and arguably the last of its kind of supernatural thrillers. Here you will find all the classic ingredients that went into the best horror stories that ever made you brown your pants as a kid.

George C. Scott is composer John Russell, who suffers the accidental deaths of his wife and daughter and moves into a secluded, rambling mansion (aren’t they all?) to forget, reflect and compose.

The presence in the house won’t let him do any of it.

What makes rambling, hardwood-floored mansions so intrinsically eerie? Director Peter Medak doesn’t have to go too far to create a foreboding atmosphere; every scene holds trepidation, every camera angle on every darkened corridor and whispery staircase seems to cry out that something inexplicable awaits to skew normalcy.

That’s how the conceptual anomalies of ghosts and poltergeists achieve their “scare factor” – they shatter what you hold innately to be normal. When you enter your house in the evening gloom, you don’t expect a red ball to come bouncing at you from the top of the darkened staircase.

And when you take that ball – that belonged to your dead daughter – and throw it into a river to flense her memory, when you come back home, you don’t expect that same ball to come bouncing at you from the top of the stairs again!

Oeeuuh! I feel the tears brimming my eyes and the hairs on my arms rising!

The soundtrack and sound design lends volumes to the eeriness; piano-based motifs and subliminal whispering and lots of knife-like violin jabs.

Claire (Trish Van Devere, with a voice like tinkling crystal) is the real estate agent with whom John shares revelations he uncovers about the history of the mansion. The haunting is to right a wrong.

And Patton’s the man for the job!

The mansion’s haunted past is revealed as gradually as the supernatural phenomena escalates. There are no sensationalistic hillbillies with axes or elaborate special effects; all the scares are wonderfully subtle and built on solid primal terrors. Loud banging noises awaken John at 6 a.m. every day, a piano note plays itself, a psychic woman scribbles cryptic clues, a tape recording picks up a whispering infant’s tragic pleas, a boarded-up attic room is discovered with a tiny cobwebbed wheelchair, doors slam, the P.O.V. camera goes bananas… there’s even the old batshit-crazy lady who warns “The house doesn’t want people.” And then – Baltar from BATTLESTAR GALACTICA! This movie has everything!

But it’s not that the house doesn’t want people. The house is trying to get the attention of anyone who will listen. And John is psychically shown a true story of real horror that walked the house in 1906. Thus came the changeling. (Oh my God! A changeling! What unspeakable, indescribable, horrific beast that can morph into terrifying… uh, what’s a changeling again? Thus did I grow up thinking ‘changeling’ was some kind of monster…)

Written by Russell Hunter, William Gray, Diana Maddox, THE CHANGELING sometimes stoops to silly horror movie conventions: during a séance, a steel tube is placed on the table specifically for a ghost to throw against a wall (no strings attached); a woman goes into a dark attic without turning on lights; the obligatory fiery finale. And of course, every time the rule-less world of spirits is breached, my head nearly explodes with the contradictions. Regardless, this movie is so well executed and stands the test of time so well that even though I know what’s coming every time I watch it, I still have to change my pants at the end.