The Man, The Myth, the Trousers.

Robert Downey Jr. runs around like a madman, knocks things over and falls down a lot. (Cocaine’s a helluva drug.) And in CHAPLIN, he gets to do all that without being arrested… 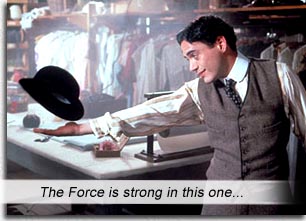 Baron Dickie Attenborough‘s CHAPLIN is a towering tribute to one of the pioneers of the motion picture industry – Charlie Chaplin, not Robert Downey Jr. Yet it is a tower with no windows. As his biographer tells Chaplin in the movie, “You shouldn’t be afraid to let the readers share your emotions, your feelings.” In CHAPLIN, we are presented with everything that went on AROUND Chaplin, but not very much INSIDE him.

Robert Downey Jr. is Charlie Chaplin, inhabiting the man and his mannerisms to a fault, yet, like Chaplin himself, never letting us get under his skin, into his mind.

This may be an unjustified argument to those who view this film and weep at its raw power – Sir Attenborough is a master filmmaker and can do that to a body – but to those who know Chaplin as the innovator, craftsman and comedian-businessman that pushed the envelope of the burgeoning European and U.S. film industries, there is much to be desired.

Based on two books, Chaplin: His Life and Art by David Robinson, and My Autobiography by Charles Chaplin, CHAPLIN gives us the storied details, but doesn’t give us the real meat of the man Charles Spencer Chaplin. We figure he was a filmmaker back in the days when La Brea Avenue was lined with orange trees instead of bums, but we are never given an indication of what a daring, pioneering filmmaker he was; how he stood on the shoulders of those who came before him and almost singlehandedly drove the motion picture industry to new artistic and celebrity heights as writer, producer, director, editor, actor, composer and even choreographer. We are shown Charlie being doggedly creative but only in respect to neglecting his three wives and numerous flings, not in relation to creating new camera movements, new filmic techniques or comedy routines.

We applaud another monumental Attenborough achievement, which does capture the stormy spirit of the man, yet we leave CHAPLIN with a sense of missing something, an opportunity lost. Attenborough and his writers (Diana Hawkins, William Boyd, Bryan Forbes, William Goldman) seemed to avoid showing us what made Chaplin Chaplin.

In Attenborough’s autobiography (Entirely Up To You, Darling, with Diana Hawkins, 2008) we learn that the decision to present the film in flashback with an added emphasis on Chaplin’s older years was not Attenborough’s but his financial backers’. Attenborough’s hand was also forced in changing the film’s original breezy title of CHARLIE to the more sober CHAPLIN. Typical! Idiots with money and no talent forcing the hand of artists. The way of the world.

The film flits from one vignette to the next, jump cutting and flashbacking until we’re as dizzy as The Little Tramp in the mirror maze in THE CIRCUS. So CHAPLIN seems fragmented, tied together by using the device of a present-day editor (Anthony Hopkins) asking old-age Chaplin about details for his autobiography as an excuse to flit – from Chaplin’s childhood in the Dickensian slums of London, to vaudeville, to running his own studio in Hollywood.

By the way – that’s the fakest old-age makeup I’ve seen since Michael Pare’s mustache in EDDIE AND THE CRUISERS II. Downey gives a master class performance, but I’ve seen better wraparound masks on STAR TREK geeks pretending to be Klingons.

Back when the Hollywood sign still said Hollywoodland, Chaplin was the first true King of Comedy. The title was originally bestowed on Mack Sennett (played here by Dan Aykroyd), the director who founded Keystone Studios in Edendale California (originator of the Keystone Kops), and who hired Chaplin on contract, getting him to run around like a madman, knock things over and fall down a lot. Many unaware of Chaplin’s genius would be equating him with these Keystone features, erroneously believing his own writer-director efforts followed Sennett’s pedestrian knock-down fall-backwards formula. Quite simply, comparing Chaplin’s auteur work to Sennett’s dogsbody vapidity is like comparing Dustin Hoffman’s acting to Chris O’Donnell’s vague lip-flapping.

In real life, the ambitious Chaplin endured the Sennett years with a grimace (not made clear here), until he procured his own studio at the age of 30, and the power to create films that would be genuine gems a century hence.

CHAPLIN never makes the distinction between the quality of Chaplin’s work and Sennett’s or any other contemporaries (Buster Keaton, Harold Lloyd, Harry Langdon). So when we are told that Chaplin is the biggest star in the world at one point, some youngsters may imagine he attained that pedestal simply by being a celebrity (like the talentless, over-marketed brainless celebs of today – Montag, Khloe, Kendra, Snooki, Sorrentino) but he did it via actual hard work and unbounded talent and drive.

His drive to create cost him three marriages: 17-year-old Mildred Harris (Milla Jovovich, who slips a little nipple for us), Lita Grey (Deborah Moore), and Paulette Goddard (Diane Lane – young, tight and glorious). He would eventually settle down with Oona O’Neill (Moira Kelly, who also plays a double role as young Chaplin’s first love, Hetty. The resemblance between the two girls is never mentioned, though I guess the audience is meant to regard it as symbolic; that Hetty was his ideal and that Oona fulfilled that ideal – ?).

There’s the blonde bimbo stalker (Nancy Travis as Joan Barry), who accuses Chaplin of siring her child (hey, which famous man HASN’T had that?), with the prosecutor (James Woods) imploring the jury not to go by “this new-fangled thing called blood tests” (which proved the baby wasn’t Charlie’s), but to use their common sense in seeing the baby’s resemblance to Chaplin, using Charlie’s own creation against him, dirtily calling him, “this little tramp…” Richer, smarter and British, Chaplin was naturally declared guilty by the panel of ignorant, provincial rednecks.

Geraldine Chaplin (Charlie’s real-life daughter) plays Charlie’s insane mother, Hannah. David Duchovny is a hand-cranking cameraman (who believes the truth is out there somewhere), Paul Rhys is brother Sidney, and Penelope Ann Miller makes an appearance as Edna Purviance, a lifelong friend, who appeared in Chaplin’s THE KID.

When the movie shows Chaplin’s films, they show the real thing – no need to doctor Downey into the footage or create new “old” footage as Downey’s recreation of Chaplin is so exacting in the “real life” segments.

Kevin Kline is Chaplin’s good friend and raconteur, Douglas Fairbanks who, along with Mary Pickford and D.W. Griffith, founded United Artists with Chaplin. (Isn’t that a fantastic nugget; that Charlie Chaplin founded the first incarnation of United Artists? Yet the film flits about so fast, we hardly absorb this info. CHAPLIN reminds me of Jon Amiel’s film CREATION (2009) in which Darwin’s storied life is also shot at us through cannons, again only serving to whet the appetite for further delving into the great man.)

In 1913 Chaplin came to America from Britain on a theater tour – and in 1952 he was kicked out due to the outrageous paranoia of FBI head J. Edgar Hoover (played maliciously by Kevin Dunn). Hoover was a small-minded idiot, granted, but in the movie, his motivation to destroy Chaplin seemingly stems from being slighted at a swank dinner by him (where Charlie cutely tries out the famous bread roll dance which would be seen in GOLD RUSH). In real life, Hoover used McCarthyism as an excuse to perve into the sexual exploits of people he didn’t like and assuage his small-penis insecurities by indicting them for anything mundane; making up communist enemies to keep his job – the precursor to the swine Dick Cheney.

Throughout this movie we lose cognizance that Chaplin made SILENT FILMS, heavily resistant to the “talkies” that were gaining popularity, because he was sure they would mean the end of the mystery behind his Little Tramp character. The first talkie he would make would be the controversial THE GREAT DICTATOR (1940) – a spoof on Nazism as it was spreading its venom across Europe; controversial not because he supported Nazism (which he didn’t) but for the simple fact he was featuring it in a movie. Though the final melodramatic speech is a cry for freedom from dictators, the FBI and the majority of mouth-breeders that make up America willfully misapprehended it and this movie tells us DICTATOR directly led to Chaplin’s exile. His thoughts about his first talkie were more prophetic than he could imagine, “Talking will be the end of the Tramp – but at least he’ll go out saying something I believe in.”

He should have reminded J. Edgar Swine that he was wearing that Hitler mustache long before Adolph. Doug Fairbanks tells Charlie, “You look a lot like him – the mustache – I think he stole your act!”