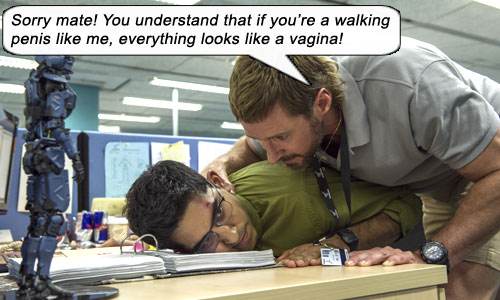 In 2016 (yup, “The Future”!) Johannesburg is the first city in the world to instigate an all-robot police force; humanoid in appearance, unthinking, unfeeling, undiscerning, just shooting and killing and arresting with their artificial intelligence. You know, like real police.

These “Scouts” are such a hit with the government that their creator, Deon Wilson (Dev Patel, SLUMDOG MILLIONAIRE) becomes the golden-haired boy of the corporation. Meanwhile, scowling in a corner cubicle is Vincent Moore (Hugh Jackman, THE WOLVERINE), because his crimefighter robot, The Moose, is passed over for funding. It’s expensive, gigantic (resembling the ED-209, those giant droids from ROBOCOP), and uses outmoded technology, i.e. humans controlling it remotely. That’s Vincent’s caveat to investors: that Deon’s Scouts are A.I., making life and death decisions on their own, while his Moose has the safeguard of a “thinking, adaptable, moral” human at the controls (which would become ironic later when he unleashes his Moose – with him at the controls – and does things decidedly unthinking, inhuman and immoral).

Psychosexual Afrikaner rap group Die Antwoord (transl. The Answer) are two desperate criminals who plan to kidnap Deon and force him to turn all the Scouts off, so they can heist 500 million dollars. 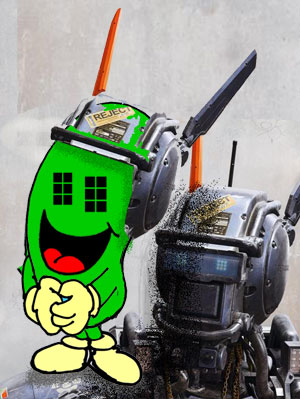 Die Antwoord’s inclusion in the film is its simultaneous salvation and probable downfall. Now don’t get me wrong: the band itself – made up of the volatile Ninja and sassy-perky Yo-Landi Visser – is innovative, anarchic and fun, but their inclusion here seems meta, because they play “themselves as gangsters”, which is what they play onstage in the real world. In the film, they freak out their warehouse domicile in “zef” warpaint – the designs and style you see in all their real life videos – and they even use their real names. And though most of the time their naturalism brings an edgy groove to CHAPPIE, an unpolished street vibe that a Hollywood actor could never hope to recapture, in some instances their inconsistent behavior reminds us of that thing Mark Wahlberg did in M. Night Shyamalan’s THE HAPPENING. We don’t know what it was, but some called it acting, as in “You call that acting?”

Deon creates an A.I. program which would enable his Scouts to “think and feel” but is prohibited from uploading it by the company boss (Sigourney Weaver). So he steals a scrap Scout from the company for his experiment. And is kidnapped with the Scout by Die Antwoord! Forced to upload the A.I. program under the gun of Ninja, Yolandi and accomplice Yankie (Jose Pablo Cantillo), Chappie is born/activated. Sharlto Copley (Neill Blomkamp’s golden-haired boy) voices the CGI Chappie and plays Chappie in motion sensors (the same way Andy Serkis brought Gollum and Caesar to life).

When he becomes conscious, Chappie must learn language, and that’s where this film – like every film where language is learned too quickly – falls down. When Deon instructs Chappie, “That’s a watch,” why doesn’t Chappie repeat, “Thatsawatch”? How does he home in on the subject of the sentence and just ask, “Watch”? How can his unformed mind/processor differentiate the importance of each word? When Yolandi throws a whole slew of words at him, “My name is Yolandi. Your name is Chappie,” how does he pinpoint and repeat just “Yolandi” and “Chappie”? Annoying… onward…

Speaking of speaking, Dev’s accent is Pommie, Hugh’s accent is DownUnda and Ninja’s accent is Unthinkable. (What kind of deformed conjugation of dialects had to bathe naked with one another to create that Afrikaans accent? Is that Dutch combined with Martian?)

CHAPPIE is Pygmalion, Pinocchio, Frankenstein all rolled into one. It is a modern retelling of those fables where a creator plays god with life itself, and explores that fine line between true life and the simulation of life. Deon sees his creation as an “evolutionary step forward” and that question of consciousness is asked, “What makes a human being a human being?” The same questions are raised in SHORT CIRCUIT (1986), both ROBOCOP (1987) and its remake (2014), Spielberg’s and Kubrick’s ARTIFICIAL INTELLIGENCE (2001); and soon to be asked again in Alex Garland’s EX MACHINA (2015).

Intelligence is the keyword here. Where does the seat of consciousness reside? Blomkamp (and co-writer Terri Tatchell) explores the audacious concept that consciousness is just a bunch of electrical signals, linked together a certain way. It can be seen on a computer monitor and downloaded. And if it can be isolated, can it be transferred? 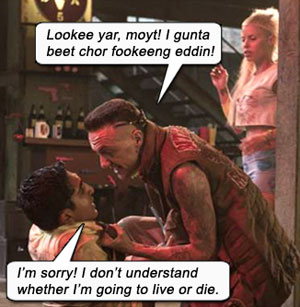 CHAPPIE also explores Nature vs. Nurture, as the child-like Chappie (who has the potential to be an officer of the law) is commandeered by the thugs to turn him into “indestructible robot gangster number one.” Yolandi proclaims herself “mummy” and Ninja by default becomes “daddy,” while Deon’s honorific is “maker.” (It’s a strange relationship between the thugs and Deon, as Ninja cannot stand the scientist, but lets him wander in and out of the gang’s hideaway at will; a hate/tolerance relationship because Deon is Chappie’s only maintenance.) Chappie quickly starts picking up thug habits: gang-signing, learning to “walk cool like daddy” and wearing bling. And stealing cars – because he is told by Ninja that those cars have been “stolen from daddy.” Chappie is led by the nose towards a major heist, which he balks at because it is “wrong.” However, a very human reason arises that compels Chappie to felony. Ninja tells him truthfully, “When your battery dies, you’re gonna die. Lots of monies can fix you, so to get monies you need to do the heist.” And truly, isn’t that the reason why WE do anything in this world, honest or “dishonest”? Self-preservation!

I hate the fact that “crime” is once again represented as lower class crime, where we can see people with lots of tattoos and no shirts take things and drive away in hopped-up cars, so that the police droids can give chase. But that’s not true crime. That’s the result of true crime, which is actually located at the top levels of the governing bodies that create the sociological disparity that necessitates small-time crime, which is simply trying to equal the stakes. Self-preservation on an animal level.

Chappie asks Deon the question you should ask of your own god: “Why did you make me just so I could die?” Isn’t this a commentary on the finite nature of your own deity?

Though there is hullaballoo in the junkets over Chappie’s artificial intelligence being feared as a successor to humankind’s reign on Earth, the overall battle is not “for humanity’s soul,” as only two people – Deon and Vincent – are involved. And even then, Vincent’s deadly actions against Chappie are more a “business” decision to demonstrate his Moose than a retaliation against A.I. per se. No one else seems to know or care about the A.I. robot running around (besides Sigourney Weaver, but she disappears quicksmart, to go fight some Aliens we presume.) So the battle is insular and doesn’t seem “epic” enough. That’s a built-in problem with the film that I think audiences pick up on subliminally.

And are we ready to see Hugh Jackman in such a villainous role? At one point, he turns off all the Scouts – exactly what the thugs were planning – but for his own provincial nefarious ends: so that his Moose could be deployed, seen by the authorities as a powerful deterrent against crime, and subsequently marketed. It’s calculating and cruel, with cops and civilians being killed for his actions. His pure evil is tempered in one scene where we see him as we’d like to see him, when he passes off a threat against Deon as a joke, “Just pullin’ ya leg, mate!” With that smile, the sun shines in and we kinda like him again; then his brow immediately goes dark when he returns to his cubicle.

True Crime may be misrepresented, but True Justice is courted: Much like Brando in THE GODFATHER advised Bonasera that killing the men who molested his daughter would not be true justice because his daughter was still alive, so putting them in hospital would be retribution more justified, Chappie does not kill Vincent in the final hand-to-hand combat (in which we are constantly waiting for Wolverine to pop his claws and go to town – due to being artificially conditioned to seeing Hugh that way), but rather breaks Vincent’s arm and leg – injuries Chappie sustained earlier – “Now I forgive you!” We viscerally feel true justice is served only after we’ve done unto others as they’ve done unto us. It’s what The Law tries to emulate but never gets right. And it shows us how close to human Chappie has become…

CHAPPIE is fast-paced, to the point where plot holes glare at us like Error 404 messages, but for the sake of Blomkamp trying to work an old concept into our new techno vernacular, I give him a pass. Action-packed, CGI-seamless, funny, at times chilling (as when Chappie is told that stabbing a person is simply putting them to sleep – and he asks a wounded man, “Do you want to go to sleep?” while wielding a knife); a commentary on humanity, deity, dystopia, Big Brotherliness, and even sacrifice and love. It is science fiction about to turn the corner into science fact.

The last scene will make you ponder: It’s one thing to upload someone’s consciousness into a steel robot with no fun bits – but why not put it into a Real Doll? Now there’s a compelling reason for artificial intelligence I can really get behind…