Owned By His Own War. 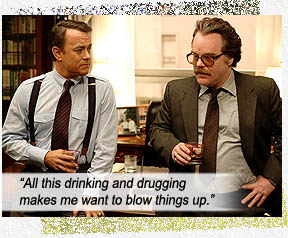 A splinter group of the Mujahedeen would later become the Taliban.

In the Mike Nichols-directed political intriguer, CHARLIE WILSON’S WAR, America’s golden boy, Hanks, is early-80s Texas Democratic congressman, Charlie Wilson, quite a down-to-earth, uninhibited roarer, rogerer and cad (from this movie’s account); not afraid to whore around in public, do drugs at socialite parties and admit to unethical practices. Makes us wonder how such a fun guy was elected in the first place.

The real life Charlie Wilson was honored with this movie because he was in a position to help the CIA fund Afghan troops against Soviet invaders, thereby altering a major stream of history. Suffice to say, the movie paints him as noble, basing its stance on one trip he makes to an Afghan refugee camp to visit kids with their limbs blown off, thereby strengthening his resolve to appropriate funds and drive out dem debbil Russkies.

Chameleon Philip Seymour Hoffman plays disheveled, loose-cannon CIA operative, Gust Avrakotos, whose banter with Wilson is one of the features of this sometimes-tedious exercise. He is Wilson’s enabler and smarmy conscience. When Wilson exhibits doubt about the ethics and effectiveness of their planning, Gust consoles him with a Zen fable:

In retrospect, we definitely see that America’s dabbling in foreign conflicts has backfired in blowback as big as 9/11. Still everyone refuses to “see.”

Joanne Herring (Julia Roberts), a high society harlot who occasionally bumped uglies with Wilson, squirms her way into the history books by being the one who convinced him to visit the camp. She is portrayed as a big influence on Wilson, even though she was just another pretty ass hanging off his cocaine-addled coattails, with a decidedly Marie Antoinette mind-set (i.e. out of touch with the common rabble): “People think it’s Joanne the social queen. That’s not me at all. I get bored to death when people talk about nothing.” Looked in the mirror lately, honey?

Gust and Wilson realized that their biggest problem with America supplying weapons to Afghanistan was that if Afghans were captured by the Soviets with weapons that were identified as coming from America, then the Cold War would become an actual war. So they had to supply weapons that looked like they could have been captured from the Soviets. Lucky Wilson was a politician – only a politician could be this duplicitous.

Charlie Wilson’s grand half-plan eventually unraveled due to the same political apathy that informs today’s inept government machinations – after he supplied the weapons to DESTROY Soviet intrusion, Congress funding disappeared before he could REBUILD; infrastructure, medical supplies, troop necessities were all swept under a Middle Eastern flying carpet.

The newsworthy elements were all taken care of (helicopters exploding, commerce continuing, funds disbursed, jubilant crowds in the streets) – who cares what happened next? I’m not gonna bite into the political paradoxes of Wilson’s deeds. We are not told WHY anyone would go so far overseas to support a war that isn’t theirs. What is the political/financial benefit to America? (It’s way too exhausting explaining the misdeeds of amoral politicians to an insensate public. In 2008, Alaskan senator Ted Stevens almost won back his senate seat, even after being convicted of 7 felony counts. How’s that for Low Information Voting?) Still, there is no animosity towards the American government in this movie – their neglect to finish the Afghanistan conflict is an unfortunate bureaucratic miscalculation, instead of the endemic problem it has always been. Again, the snide Amurrican gubmint never figured that decades later, their underhanded, unfinished, swinish alliances and misappropriations would be uncovered.

It makes me wonder: if supplying weapons to the Afghans was justified because one man from America was seemingly morally affected by the misery he saw and wanted to help repel the invading force (the Soviets), who’s to stop one man from another country visiting Afghanistan today (2008) and being saddened by the misery caused by the invading forces (this time, the Americans, under the pretense of fighting al Qaeda), and then funding the Afghans to repel the American invaders?

From this movie’s standpoint, Wilson is the hero – he’s Tom Hanks, he’s getting an award for being such a rogerer or something, and no one cares what the Mujahedeen descendants will do on that far-off date of September 11, 2001.

The war and its ramifications continued long after Charlie Wilson stopped finger-poking his two cents’ worth. So it only seems to be “his” war only during his involvement. He may have felt he “lost” his battle with Congress, but considering no one knows his name outside of this favorable movie, I’d say Charlie Wilson came out on top in the end.

Wilson poked his snowed nose into a melee already in progress and was “honored” with a movie terming it HIS war. Whatever will they say about that coward idiot-child president who started a war of choice with Iraq with no exit strategy?