Children Of The Damned.

When Ashton Kutcher is the funniest thing in your movie, it’s time to re-assess everything you hold dear. 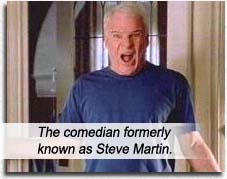 CHEAPER BY THE DOZEN is an unworthy, implausible remake of a 1950 film of the same name, with parents Steve Martin and Bonnie Hunt unconvincingly helming a hornet’s nest of selfish, ill-mannered, impertinent teen and sub-teen models in an ostensible “family comedy” which illustrates quite conclusively why some animals eat their young.

Focus groups are quick to finger “obvious” causes for juvenile derailment (video games, violent cartoons, Ozzy Osbourne), yet subversive media of this ilk – insidiously promoting the now-staple Hollywood formula of incompetent-dad-tenaciously-grounded-mom, sending messages of ignorance triumphing over experience, emotions triumphing over pragmatism, and spoiled rotten kids triumphing over their parents – is the real black-milk teat behind every school shooting and heavy metal suicide.

The MPAA trip over their bibles to quash one-second visuals of female nipples, then permit ninety minutes of mental and physical terrorizing of a father by his children (through communal pouting and “precious” antics), forcing him to relinquish the dream job he needed in order to keep these selfsame devil-children wallowing in the opulence they have been spoiled into believing is their inalienable right – all for the petty sake of lost frogs and puppy love and hovel living.

When a child goes bad, truly, it is the parents’ fault – for allowing movies like these to logjam our cinemas under the guise of “inoffensive, family-oriented entertainment”!

…Hmm, I’m hungry for some child.