Creator Nick Park brings his WALLACE AND GROMIT stop-motion skills to the chicken coop, with CHICKEN RUN, a cutesy claymation adventure set in a British farmyard where a group of chickens are trying to escape Tweedy’s Farm, whose owner has just purchased a pie-making machine that makes… chicken pies! The chickens enlist the aid of a sexy cock – I mean, rooster, who tricks them into thinking he can teach them to fly out. 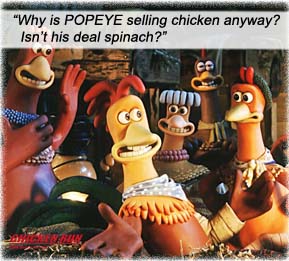 Told like a World War II prison camp tale starring Steve McQueen, Julia Sawalha (ABSOLUTELY FABULOUS) is “head chick” Ginger, constantly planning escape attempts but being foiled by her incompetent hen accomplices. One day, Rocky the Rooster (voiced by Mel Gibson) lands in their camp and injures his wing. An American circus rooster, he was just fired from a cannon, but to Ginger’s eyes seemed to be flying. (Hilarious that Mel should callback to his most famous role in BRAVEHEART by yelling as he goes over the chicken camp, “Freeeedoom!”) Trying to escape the rigors of the circus, he asks Ginger to hide him in the camp, in return for helping them escape by teaching them how to “fly” like him.

Of course, it’s a big ruse that allows him to have his fill of the cock-starved chicks whose only contact with another rooster is their resident old army ironsides, Fowler (Benjamin Whitrow).

Adding to the drama is Mrs. Tweedy (Miranda Richardson) whose motto (like Oberst von Scherbach from STALAG 17, and Colonel Klink from HOGAN’S HEROES) is “No chicken escapes from Tweedy’s Farm!,” as she plots to throw all the chickens into a pie-making machine for her new chicken pie business venture.

(The wealth of writers on this movie just seems like politics. Count them: besides director Peter Lord and Nick Park himself, there are 14 others. Poor Park, who probably had to take it like a pullet or face dismissal of the project.)

One wonders: if Mrs. Tweedy puts her limited amount of hens through the pie machine for her chicken pie venture, what happens after they’re sold as pies? Her goose will be cooked, that’s what. To make that big machine worthwhile, she would have to buy more hens or breed them. The irony is, we already consider Mrs. Tweedy evil for wanting to cook our Heroine Hens, but we’d never consider her to be so evil to be grooming animals for the pot, housed in sardine-like enclosures, fueled by fattening foods and artificial light, tainted with psychological detriment. Brrrr! Should we tell the kiddies that’s how The Colonel cultivates his secret recipe?