If there is a Best Badass Tough Guy Overcoat category, Clive Owen should sweep the field. 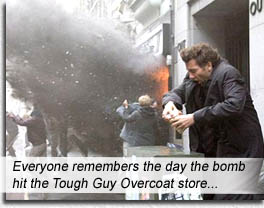 In CHILDREN OF MEN, a refreshingly original drama, Owen pecks at a few fashion police warnings (jeans and cardigan, flip-flops, shoeless, office guy couture), but it is only when he dons that long, black overcoat that he actually gets something done.

It is London 2027 and for once an apocalypse has not been caused by the idiocy and violence of the human species – but is nonetheless exacerbated by that idiocy and violence. Departing from cinematic formula, the apocalypse has not come from without (genocide, nuclear war), but from within – women have become infertile, thereby ensuring the evolutionary branch of homo sapiens is soon to wither like that of the saurians. And humankind – as it usually does when faced with no future – goes bonkers.

We catch up with Office Guy and ex-activist, Theo (Clive Owen), on the day that the world’s youngest person dies – an eighteen-year-old who is mourned worldwide. While humanity attempts to come to terms with no more children being born, Theo, with the help of an old flame, Julian (Julianne Moore, looking her usual bloodless zombie self), stumbles on a black woman, Kee (Claire-Hope Ashitey), who is somehow eight months pregnant, and must deliver her to a science community called the Human Project, the whole animalistic, political, greed-mongering human psycho-community in his path. Anti-formulaic as well, the solution to humanity’s continuance is not dependent on humaneness, morality or smartmouth Disney kids, but biological science. In a dig at the current state of First World intellectualism, the Human Project has been forced underground, attaining the aura of myth.

As in V FOR VENDETTA, the rest of the world has succumbed to anarchy and “only Britain soldiers on” – and that’s just the first jab. There is something in CHILDREN OF MEN to offend almost everyone – which is why it is so powerful. It fears no one.

The USA will no doubt have a good little cry over being shelved as a superpower again; the KKK will blow a fuse, “Humanity’s savior is BLACK?!”; immigrants won’t be adding writer-director Alfonso Cuarón to their Christmas card lists after seeing the cages full of foreigners readied for deportation (George W. Bush’s version of heaven); empowered career women will do a spit-take when Kee is given the choice of birthing the baby or not – and she defers to Theo for a decision!; animal activists should get a kick out of seeing horses burning in a field; and I can hear the feminist outcry: “Children of MEN?” followed by the tiresome “miracle of birth” refrain.

“We thought a lot about bringing a baby into this shitty 2027 world… but then we figured, Well, at least Donald Trump isn’t president any more…”

Then there’s Michael Caine, playing weed-drenched hippie, Jasper, who farms strawberry-flavored 420 – D.A.R.E. should have a minor freakout. And when he mentions the Renouncers cult (who flagellate themselves for humanity’s forgiveness), Scientologists and other lunatics are bound to take issue; and Art aficionados will cringe at the image of Michelangelo’s David with a prosthetic leg.

On the other hand, Al Gore’s nuovo flower children should love the reference to “2003 – that beautiful time when people refused to accept the future was just around the corner” (whereas W’s merc scientists will have a brainfry); and Pink Floyd-ians should recognize the cover of Animals when they see it.

There is also much to admire in CHILDREN OF MEN, screenplayed by Alfonso Cuarón, Timothy J. Sexton, David Arata, Mark Fergus and Hawk Ostby (from the novel by P.D. James): it not only captures the violent, backbiting nature of humanity, but its primal survival instinct as well – when Theo must rescue Kee from a building under army fire, the shells and shrapnel are as harshly real as any scathing SAVING PRIVATE RYAN sequence, but upon the bloodthirsty sectarian factions discovering Kee’s baby in the crossfire, an unnatural ceasefire suddenly ensues, every brainless wardog subliminally sensing that the lifeblood of their very species is contingent on this one infant’s survival.

In the best screen birth you will ever see, an artful camera angle shows us the baby exit the womb, as small as a real newborn, complete with umbilical cord and wet blood, floppy and mucused, then suddenly bursting into wailing and thrashing. It becomes a catalyst for a variety of characters who clamber to politically gain from its existence – guerrilla Luke (Chiwetel Ejiofor, INSIDE MAN), soldier Syd (Peter Mullan, TRAINSPOTTING) – or fight to nurture the human seed – the jabbering, non-English Marichka (Oana Pellea).

As much as redneck fundamentalists and hypocrite politicos pule against pornography and philandering (subsequently getting their pasty asses exquisitely busted with minors and prostitutes), it is sex and more unchristian, unsafe, semen-spilling sex that keeps our human species above ground. If sex were to stop, or if people became infertile, only then would the slogans of “No Hope” ring true. NOT – as they so “morally” warn – in the case of wanton debauchery.

Cuarón thankfully lacks that Hollywood gene that screams (in the words of Sir Laurence Olivier), “Look at me look at me look at me look at me…” and The Future is envisioned in brilliant subtlety, from the scarring set design, to the hard, gritty city exteriors; from cars to computers, media to weaponry, the production design is jaw-dropping! There are long unbroken takes that inspire breathtaking wonder at the planning that went into them (like Theo working his way up the stairs of a demolished building, while a war rages outside and inside, with people on every floor, dying, crying out, running, hiding, some hens on the stairs (!), pieces of wall falling to reveal the war outside, rags, families, mud, blood — it’s simply astounding!). And it’s not just a couple of these large-scale locations – almost every scene is a matrix of detail, with humanity ebbing and flowing like thunder through these wondrous depraved concrete jungles.

In a scene that slaps us to the reality of the imperfect future we are fast approaching, Theo cannot start a getaway car during a cold dawn and must push it downhill to outrun pursuers, who in turn cannot start their cars for Theo stealing their keys.

It’s heartening to know that in the future, Ruby Tuesday will still sound poignantly fresh, that marijuana will be cultivated with strawberry aftertaste and that Badass Tough Guy Overcoats will still look cool on Clive Owen.