The Biggest and Blackest!

The shot across the bow was BRING THE PAIN (HBO, 1996). A rising comedian then, now Chris Rock has honed his standup act to a knife-keen incisiveness in his third HBO Special, BIGGER AND BLACKER. 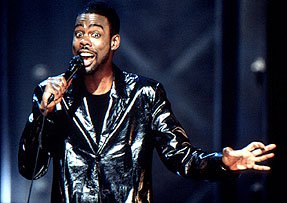 Chris Rock: The New Black Leader that moves us?

On the famed Apollo stage in Harlem, New York, attired in shiny black leather, Rock paces like a jungle cat, spitting like a raptor, his lexicon that of the mean streets, shotgunning his social commentary like an American prophet.

It’s still current! Rock’s type of observational humor interwoven with politics has the danger of becoming outdated, but – shockingly – his 1999 topics still resonate in 2014!

School shootings, gays in the military, gun control, health insurance, irresponsible mothers – even the Clinton Lewinski scandal (which Senator Rand Paul has dredged from the cobweb past in an attempt to undermine Hillary’s 2016 run, and also to prove, I dunno, that he’s a giant dick?)! It’s eerie that society is still death-locked in these same issues. And it makes Rock look like a soothsayer. He was even right about Ricky Martin’s Living La Vida Loca: “That ain’t goin’ nowhere! That gonna be around for a looong time!”

On school shootings, he asks the same pertinent question that political commentator Melissa Harris-Perry voiced a few years ago, but in his own way: “Everybody wants to know, What kinda music was dey listenin’ to? What kinda movies was dey watchin’? Who gives a shit?! Whatever happened to ‘crazy’?” (Harris-Perry: “People are always talking about gun control. What about nut control?”)

And Rock has his own (excellent) theory on “bullet control”: they should cost $5000 a bullet, “cause if a bullet cost five thousand dollars, there’d be no mo’ innocent bystanders!”

He drinks in the adulation, the crowd eating from his hand, his accent becoming bigger and blacker as he smoothly transitions to irresponsible mothers: “If the kid call his grandmomma ‘mommy’ and his momma ‘Pam,’ he goin’ to jail!”

He gives a little sugar to Daddies – the real daddies “that handle dey business.” Yet – “What does daddy get for all his work? The big piece o’ chicken!”

On the Lewinski scandal, he brings his refreshing take on the juvenility of focusing on it as if it was important. And how it was mainly Hillary’s fault for not taking care of her man in the first place. He lets us in on a truth that every man knows, that he will not disclose to any woman closer than girlfriend-status: “A man is basically as faithful as his options.”

“Every woman in here, every guy you meet is trying’ ta fuck you: Can I help you with that? Can I help you to some dick? Can I get that for you? Can I get you some dick?!’ Again, it’s an old trope that comedians fall back on, but Rock nails it to the wall.

“Insurance should be called ‘In Case Shit’…I give a company money In Case Shit happens – but if shit don’t happen, shouldn’t I get mah money back?!”

“You get paralyzed, doctors don’t got shit for you. Look at Christopher Reeve – paralyzed. What kinda sorry-ass shit is that? Superman can’t walk! What kinda injustice is this?”

“Everybody’s got to chill out on racism. Nobody’s got it worse than the American Indians… I have seen a polar bear ride a fucken tricycle in my lifetime; I have never seen an Indian family just chillin’ out at Red Lobster.” 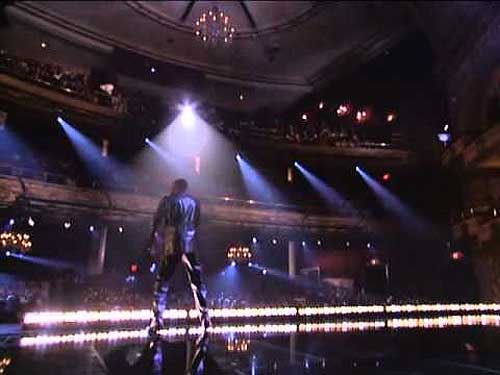 The Apollo didn’t land on him. Chris Rock landed on the Apollo!

Then there is a quirky, retrospective moment for us in 2014, as Rock (back then in 1999) reflects on how he is waiting for a new black leader to really move him, running through a short list of potentials: Al Sharpton, Jesse Jackson, Louis Farrakhan… And we smartypantses in the future wishing we could call back through time and tell Rock, “Just wait 5 years for the Democratic National Convention and watch for a young black man named Barack Obama…

“Men lie the most – Women tell the biggest lies… The visual lie: look at you: you got on heels – you ain’t that tall; you got on makeup – your face don’t look like dat; you got a weave – your hair ain’t that long; you got a wonder bra on – your titties ain’t that big! Everything about you is a lie and you expect me to tell the truth? Fuck YOU!”

Distilled honesty, raw exposition, simplifying the complicated, prosecuting the adjudicated, vindicating the prognosticated, Chris Rock, unintentionally or not, may just one day be that New Leader that moves us. And after all he’s given us, all the knowledge and insight and laughs, after opening our eyes to the pitfalls of hubris, the duplicity of society, the system built on fear, what does daddy get for all his work?