Chris Rock taught me what “tossing the salad” meant.

Admit it: you too. During his HBO comedy standup special BRING THE PAIN, Rock recounts a prisoner’s graphic advice on what you need to do to get along in jail.

And a superstar is born… 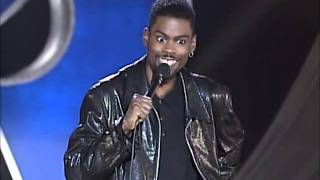 “We don’t need prayer in schools –
we need the tossed salad man in schools!”

By 1996, Chris Rock had grown into a formidable comedian in the United States, with a burgeoning standup career, a couple of choice movie roles and smattering of smaller ones; he was an SNL alumnus, a screenwriter, and already had a 1994 HBO special (BIG ASS JOKES). BRING THE PAIN would put him over the top. It’s that defining moment in an artist’s career where they tip the scales into world renown; now everyone on Earth is destined to know their name. Like Jackson’s Thriller, like Python’s LIFE OF BRIAN, like Spielberg’s JURASSIC PARK. So though it was technically his second standup outing, for many fans, BRING THE PAIN would be his “first” harbinger of hilarity.

It was untethered, unchained, unholy. Shrewd, cutting and insightful, it took no prisoners and brooked no rejoinders; the type of truthful, harrowing street comedy that breaks barriers and makes superstars. 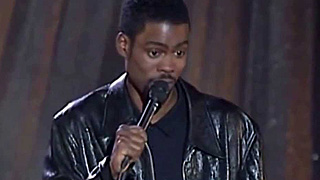 “That shit wasn’t about race – that shit was about fame, cos if OJ wasn’t famous, he’d be in jail right now!”

Years later, Rock would tell James Lipton on INSIDE THE ACTORS STUDIO that he was feeling stagnant at the time and wanted to hone his craft, so put everything aside to focus on standup. Two years on the road, culminating with this show, filmed at the Takoma Theater in Washington, D.C. For what he thought was just another hardworking comedy product, Rock would win two 1997 Emmys: “Outstanding Variety, Music or Comedy Special,” and “Outstanding Writing for a Variety or Music Program.”

What we notice first is the pacing, like a panther ready to pounce; garbed in black and leather jacket, syllables cutting like knives, an anger, an inspiration, a blood feud with the white man, a sociological hammer against stupidity. The delivery is like being slapped in the face. But it’s not just the delivery – it’s the guts. He takes risks. 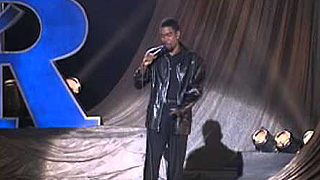 “I’m not sayin’ he shoulda killed her… but I understand.”

Besides the easy jabs (O.J., Marion Barry, marriage), Rock tackles nuanced social issues, all whilst swearing, chastising, castigating humanity for its foibles: the avoidance of pork as a religious issue, Colin Powell running for president, domestic violence, the Friend Zone, divorce inequalities between men and women, the War On Drugs… “is just to get more motherfuckers in jail, cos drug dealers don’t really sell drugs. Drugs sell themselves!”

He explains why we “ain’t NEVER gonna see a black vice president – not while there’s a white president.” Because, he says, some black guy will just kill the president, offering to do it himself, pointing out: “What’re they gonna do? Put me in jail with a bunch of black guys who treat me like a hero for the rest of my life?” When we think the bit’s over, it astonishingly continues: “Even if I get the death penalty, what’s gonna happen? Pardoned by the black president!!” 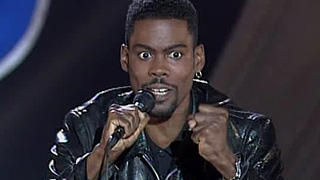 “Girl, I will shake this weave outcha hair!
Shut the fuck up!”

His observations on domestic violence are shattering; he says things that every man wants to say, but is too fearful of the fem-leaning laws to do so. His takes on O.J. and the Friend Zone – two topics done to death by lesser comedians – are refreshingly honest and against the grain. He opines that to turn kids off jail, we don’t need prayer in schools – just the salad tossing guy to explain his stuff! “If I had to choose between the Electric Chair and the tossed salad man I’d be going, ‘Where do you plug this thing in? Shouldn’t I be wet?'” And his now infamous Black People vs. Niggers thesis…

These are complicated comedy stylings from a hip new juggernaut. Listening to Rock’s renegade sociological gunmetal, it’s a wonder that one of Rock’s own heroes – Eddie Murphy – ever got as far as he did as a standup comedian with the straightforward fluff he purveyed. Not saying Murphy’s two major offerings, DELIRIOUS and RAW, were not excellent for their day, but they pale next to Rock’s obliterating dialogues. Yes, I’m blaspheming that Chris Rock is better than Eddie Murphy.

Murphy had “salad-eating bitches.” And Rock has “tossing the salad.” Case closed. What exactly is tossing the salad anyway? …You’ll have to watch BRING THE PAIN to find out.

Or go to jail.