A touch of Cosby, a sprinkle of Pryor – and a slam of Rock.

CHRIS ROCK: NEVER SCARED is the comedian’s fourth HBO Special, recorded in March 2004 at DAR Constitution Hall in Washington, D.C. And I almost feel guilty making the inevitable comparisons to his predecessors. Because he’s better than both of them. Yeah, I said it. 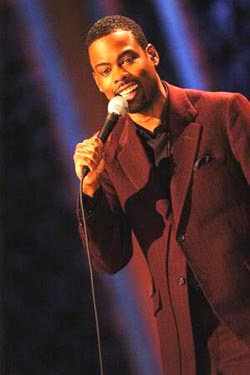 Not the ‘next Pryor’ – the first Rock!

Chris Rock has matured. He is his own man. No more sideways association with supposedly greater men. Since his second HBO special, 1996’s BRING THE PAIN, he has worked through blood and bone to become a great man himself. His film career has still not scaled the heights of Eddie Murphy’s (whose standup movies and comedy albums in the mid-80s caused tectonic shifts in the comedy universe), but as a standup comic, he is untouchable.

Cosby had his family tales and his transcending of race and gender – the first white black comedian; Pryor brought the snarling street; Murphy brought simplistic funny anecdotes and impressions of Pryor and Cosby – and Chris Rock brings the pain. His sociological, deep-cutting, observational humor can best be described as “the black George Carlin.”

And his onstage presence is magnetic, a prowling jungle cat, still opting for a corded microphone (which he drops intentionally callously or slams to the ground at the end of every set – a rugged move!); his delivery a two-fisted attack, biting off every phrase like raw meat, hitting those hard consonants from his diaphragm (someone described it as “chiseled”); a little emphasis here, a lazy ghetto phrase there, voice rising and falling in frustration, anger, amusement of mankind’s foibles.

Written and executive-produced by Rock, he opens the show talking about his daughter. Now usually when a comedian starts in on pets or kids, it’s a death knell for the bit, but Rock goes in a direction that doesn’t bore us with cute idiosyncrasies that only a parent could love – he speaks of his daughter in relation to his role in her life: “My only job – is to keep her off the pole!” Which leads to strippers, and pondering how “clear heels” became their fashion statement of choice… And into the wild black yonder we go!

Of course, trying to convey one-liners out of context is akin to Eddie Murphy’s caveat that foreign audiences’ only take from his shows are the swear words (“Hello Eddiieee! Mr. Fuck-You Man!”). Rock’s act is also liberally sprinkled with all Carlin’s Seven Dirty Words and more, the mitigating factor being that he’s got his finger on the sociological pulse of a generation, and any prophet must necessarily speak in the parlance of that generation.

There are many good and great black standups (Martin Lawrence, Kevin Hart, Dave Chappelle, et al), but let’s just ‘fess up and say out loud that there is only one contender to be the new Richard Pryor.

Nay, the one and only – Chris Rock.