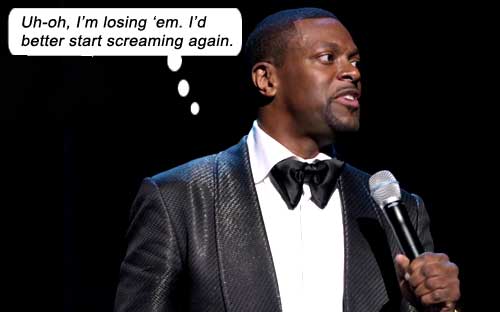 Falling Down While Standing Up.

From his hometown of Atlanta Georgia, filmed at the 4,600-capacity Fox Theater in November 2014, Chris Tucker regales us with the type of comedy that would be heckled unforgivingly in smaller clubs. It’s CHRIS TUCKER LIVE. I think. Knowing that comics like Carlin and Hicks and Pryor existed, and knowing current voices like observational powerhouse Louis CK and sociological jungle cat Chris Rock still prowl the comedyways, watching this watery, derivative, unfunny performance by a comedian who showed great promise in his youth, is… disappointing.

Tucker’s opening, where he notes the difference in your partner’s attitude before and after marriage (i.e. before marriage, they’ll fix you a sandwich without question, after marriage, they’ll snap at you to fix it yourself), is so beaten to death by the comedy community in general that it is exhausting trying to eke out a smile let alone a laugh. If this is the opening, how weak is the show? Our answer would come immediately, as the ballroom-attired Tucker starts describing his girlfriend taking him rollerblading. Uh… really? Like we care.

Distributed by Netflix, written and produced by Tucker, and directed by Phil Joanou (GRIDIRON GANG), the rest of this 90-minute show is as beige as the opening clunkers. Is it irony or tragedy that a comic’s first Stand Up Special arrives when he’s not funny anymore?

There’s an extended “Michael Jackson” segment where Tucker recounts his adventures hanging with The King of Pop and filming You Rock My World. Though there are funny snippets, Tucker has to end this segment importuning his audience, “Give yourselves a big hand!” – because the end of that segment was so weak he didn’t get enough applause to establish it as an ending! I can’t believe the director left this in.

Besides his childhood anecdotes, all sprinkled with intermittent high-pitched shouting (which worked when he was younger, but in this older, more sedate context, seem like desperate exclamation points in lieu of punchlines), Tucker does a passable Clinton and a terrible Obama. Even when he dips into political personalities, it is shallow impersonation guff, nothing biting, insightful or politically challenging.

Tucker was on his way to becoming the next Eddie Murphy; his cutthroat performances on DEF COMEDY JAM in the early 90s and his solid comedic turn as Smokey in FRIDAY (1995) cemented him as a force on the horizon. Alas, the sun has set. Whereas his early standup and filmic roles like THE FIFTH ELEMENT (1997) and MONEY TALKS (1997) were perfect vehicles for his shotgun delivery and frenzied demeanor, CHRIS TUCKER LIVE only highlights how much fire he has lost in growing up and growing old. There were also those silly-but-lucrative RUSH HOUR movies, but the less said about them…

Hey, he really is the next Eddie Murphy…