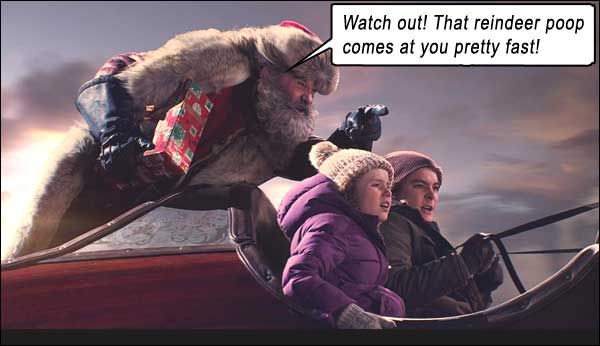 Even Kurt Klaus kan’t save kristmas.

If you thought Kurt Russell could save THE CHRISTMAS CHRONICLES idiocy by Being Kurt Russell, well… almost. But it’s getting harder and harder to polish these christmas turds, as screenwriters must deal with children who every year get more and more sophisticated. And trying to explain away magic as science is sounding stupider and stupider to kids who understand genetic evolution and Computer Graphic Imagery.

Now you may think I’m over-scrooging by bringing “science” into the irrational, brainless ritual of christmas, but what do I mean by science? I mean the “scientific method” – that is, EVIDENCE. The one mistake EVERY Santa movie makes, where the plot revolves around people not believing in him, is that Claus still delivers presents – even to the non-believers! Yet that evidence of unsolicited presents is never examined by the dunces who claim they do not believe in him! In CHRISTMAS CHRONICLES, how can the mother of the two kids, and the older boy, cynically claim “Santa doesn’t exist,” when he is delivering presents to them every year? Where do they think those presents – that *they* didn’t buy – come from?

Onward with the irrational, brainless plot…

On christmas eve night, 10-year-old Kate (Darby Camp) and her 17-year-old brother Teddy (Judah Lewis) steal onboard Santa’s sleigh and startle him into crashing it and losing his hat, which provides the magic to fly and bend time and all that hooey. Also lost is his bag of toys. And the reindeer have run off, even though we’d expect them to be trained well enough to stay with their master. Guess that part of the Santa mythos doesn’t fit the plot.

Now Santa needs to fix his sleigh, then find his hat, his bag and his reindeer, in time to deliver all the toys for christmas. As punishment for making him crash, Santa enlists the aid of Kate and Teddy. In other words – say it with me! – the kids have to “HELP SANTA SAVE CHRISTMAS!”

Same plot as every other Santa film. We can stop watching right here to keep our sanity. The only reason some knob producer greenlit this new pile of old dogshit was because Kurt Russell somehow got rufied into signing on.

Kimberly Williams-Paisley is mom (well, we know why she signed on, not having done anything of note since daughter in FATHER OF THE BRIDE). Oliver Hudson is recently-dead dad, and Teddy’s christmas wish to Santa is “to see him again.” (Doesn’t a 17-year-old know you can’t raise the dead? Does he want dad decayed and brainless? Later, dad appears in a tree bauble to speak to Teddy. How very white of him.)

Writers David Guggenheim and Matt Lieberman, and animator-turned-director Clay Kaytis (ANGRY BIRDS) address many of those issues that keep Santa in the realm of myth: how he moves quickly from house to house (as a red blur); how there are limitless toys in his bag (a dimensional space filled with floating toys; also, home to all his CGI elves, who speak a pidgin language and are mechanics who fix the sleigh); how he moves quickly from city to city (some kind of wormhole device). None of Santa’s gags are actually called “dimensional warps” or “wormholes” etc. but the filmmakers know that audiences in 2018 are conversant with these devices from superhero and fantasy movies.

Two cops arrest Santa. In this fracas, at least 8 cops see the reindeer fly, but not one of them makes a report on this. So that’s the world where no one believes in Santa Claus – a world where people don’t do their jobs properly, a world of incompetents.

In jail, Santa (aka Kurt Russell, aka the best Elvis) gets to front a band of jailbirds, led by Steven Van Zandt. It’s Little Steven and the Disciples of Soul! (And wherever Little Steven goes, his untalented wife can’t be far behind. Maureen Van Zandt cameos on tambourine, last seen non-acting in THE SOPRANOS.) In keeping with the bland tenor of the movie, they jam on the most boring basic 12-bar blues you could ever imagine. Middle America goes ape.

Because that’s the demo, no? Extra-terrestrials only abduct rednecks from Middle America, and Santa only delivers his presents there, to the privileged upper classes with houses and chimneys. So he’s always appearing in affluent suburbs, with every kid’s name being Tony Brooks or Timmy Burke or Adam Maple. 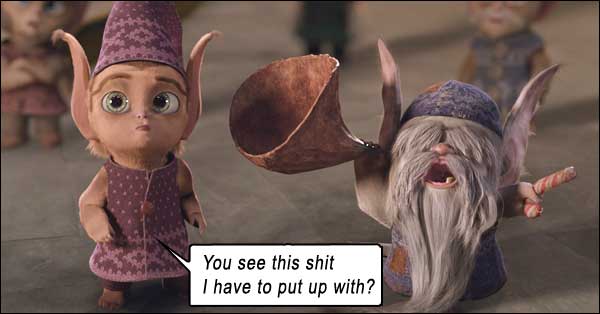 CHRONICLES remains painfully cliché throughout, including all those moments that we know are structured to be tear-jerking, inspirational or awe-inspiring: that moment when a character looks down at something precious to their heart and a carol starts in the background (moms go weepy); that moment when the reindeer are fleeing, approaching police cars blocking their path and at the last second, they take flight (kiddies go oowaaah!); that moment when we enter the toybag amidst a sea of floating toys and are led into the Elf Realm (kiddies go whooooa!)… And of course, someone had to say, “Imagine what we could do if we all worked together?” (adults go ooweh!)

But let’s not forget that before they were spirited off in the sleigh, Kate spied Teddy stealing cars with his teen mates. This was not a small white lie about not washing behind his ears – this is Grand Theft Auto. What’s the penance to wipe out those felonies and get back on the Good list? Yet these crimes are never mentioned again, and it is taken for granted Teddy is not on any Bad list simply by being around Santa. Guess it’s Who You Know.

In jail, Santa – who has pined for his magic hat all this time, the lack of which landed him in cuffs and behind bars – nonchalantly pulls out instruments for the whole jail band. From his ass. Wait – so he IS magic?! And then the Elves (all in direct competition with Baby Yoda and Babu Frik for cutie-bo-bo merchandise) create a wormhole in the cell for Santa’s escape! What the fuck?!

The last contradictory nail in the christmas coffin is when Santa gives Teddy his hat, and asks him to drive the sleigh, so that Santa can concentrate on dynamic delivery posedowns. The instructions: “Think about where you wanna go. And go.” It’s that easy? How the fuck did you lose control of it then, old man? And the hat is not magic at all – YOU are. Which means all this “adventure” has been some sort of ploy to dispel your boredom or get jail-raped, or something. You never needed the help of the kids, never needed to get arrested, never needed to locate anything that wasn’t actually “lost” in the first place, because you knew exactly where to retrieve them through your black debbil magick. Is there some sort of Recompense Clause where I can get back these two wasted hours of my life?

Yes, the only redeeming grace in this movie is Kurt Russell as Santa, playing it as a rugged mountain-man type, not at all “fat,” and outraged that the media still depicts him that way. And he’s not too crazy about that catchcry the media invented for him either – “Ho ho ho!” Seems Santa has his own issues with Fake News.

And guess who Mrs. Claus is? Well, Goldie Hawn of course!