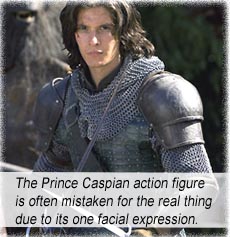 Has stupider become the new darker?

Everyone thrills at describing how PRINCE CASPIAN, the second movie in THE CHRONICLES OF NARNIA series, is “darker” than its predecessor, THE LION THE WITCH AND THE WARDROBE (2005).

But they lost me at pasty, delicate, British kids playing pretend “warriors.” I’m just not buying any of it. Every time William Moseley introduces himself as “King Peter the Magnificent,” milk shoots out of my nose whether I’m drinking it or not.

In director Andrew Adamson’s followup to his above-mediocre WARDROBE, we catch up with our four “heroes” back in snooty old London, Peter (Moseley), Edmund (Skandar Keynes), Lucy (Georgie Henley) and Susan (Anna Popplewell, whose drab gray schoolgirl outfit is simply an invitation for me to lock the doors, break out the hand lotion, and popple well). They aren’t there long, as a crisis is brewing in Narnia, and indeterminately-Euro Prince Caspian (Ben Barnes) blows his magic horn to summon them back to the land of annoying talking animals.

It is hundreds of years since they left and Narnia has become at least as savage as any given petting zoo. Cos it’s “darker,” see. Caspian is the “rightful” heir to the Narnia throne, while a knight who looks like Jean Reno (Sergio Castellitto) is trying to kill him and claim it for himself. Having the ballsac of a mosquito, Caspian calls on the magical help of the Kings and Queens of Olde. He’s right to be disappointed when Peter, Edmund, Susan and Lucy appear, although he does end up making eyes at Susan for three whole seconds. More than enough sex for a Disney feature.

Still, there’s sure a lotta killin’ for a christian kid’s movie – bloodless, to be sure, but those pasty Brit kids seem to revel in their bloodthirsty magical weapons taking lives.

The overarching storyline is that of Prince Caspian uniting all the annoying talking animals in a war against Jean Reno – but movie is nothing more than battle after battle, broken up by boring slow passages where people whine about Aslan the Lion (Liam Neeson) not being around. Which makes you wonder why the golden furball waits until the end of the film to turn up, roar a little and tell Lucy “Things never happen the same way twice.” Great excuse, lion! Right up there with “She lost the will to live” in the George Lucas Movie Reasons For Dummies book.

A night raid on Reno’s castle achieves nothing; simply a good excuse to get more christian killing done, and allow Peter to voice his embarrassing battle-cry, “For Narnia!” in slomo. And when Susan climbs on the back of that centaur – now Disney, you’re making me think bad thoughts again.

Desperately trying to be LORD OF THE RINGS – and failing with a badger up its gollum – the final phoney straw comes when the TREES join the battle, in what looks like The Battle of Pellenor Fields meets Los Angeles Petting Zoo.

Tilda Swinton cameos as The White Queen, and when Caspian tries to touch her, Susan gets pouty! – even though she never expressed any interest whatsoever in him! Like every chick who expects you to pine after her even though she gives no indication she wants you to pine, Susan sulks like a high maintenance girlfriend when Caspian seeks elsewhere what he knew he was never gonna get from under her heavily-fortified Disney skirt.

It’s about then that Caspian realizes he’s just a glorified extra and fades into the middle background peacefully.

Arrogant snot High King Peter Of The Unearned Title challenges Reno to a mano a mano duel, goes striding out with his MAGIC SWORD by his side – and still can’t bring down the mortal man fairly! Either Reno’s excellent fighting skills can circumvent magic, or I’d be hunting down Santa Claus to get my money back on this “magic” sword that refuses to find its mark.

Point of this solo battle was to avoid full scale war, yet after they pad twenty minutes of Peter getting his magic-sword-weilding ass handed to him by a real knight – they launch into full scale battle anyway. To pad the film until Aslan turns up and roars. More magic stuff. Deus ex machina water spirit eats Jean Reno. Kids go back to London after whining over how much they’ll miss Narnia until funding comes through for another sequel.