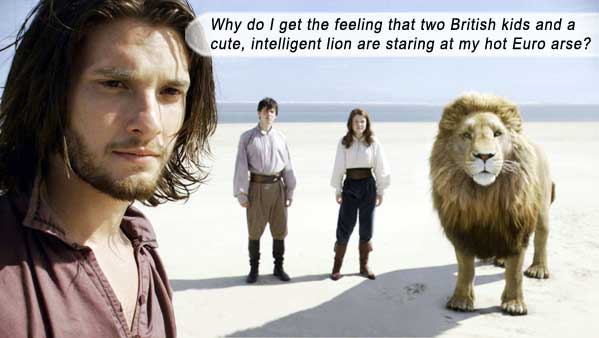 Moulage of the Ripe Cheddar.

THE CHRONICLES OF NARNIA: THE VOYAGE OF THE DAWN TREADER: where characters we care not one whit for embark on a journey we have absolute zero interest in.

After two movies, author C.S. Lewis’s epic saga of the magical Narnia universe is going nowhere fabulously fast. And by that I mean, director Michael Apted (THE WORLD IS NOT ENOUGH) has been taking lessons from George Lucas, by Making It Up As He Goes Along, and allowing CGI to tell the story that his inept actors cannot convey. Ironic that this third installment in the Narnia franchise is a travelogue, a road movie that stands still.

The magic has been completely lost. Two reasons: The dynamic of the four young children discovering a fantasy world is sorely missing, the two Elder Snobs (William Moseley and Anna Popplewell) only appearing in inane cameos, leaving the burden of screentime to their non-actor siblings, Edmund (Skandar Keynes, whose line reads are incredibly awesome for a block of wood) and Lucy (Georgie Henley, who continues to pout her lines like a Disney infant on Christmas Day, even though she’s now sporting chest buds). Oh yes, and now they have a Cousin Oliver* along for the ride (*the classic BRADY BUNCH gambit of introducing a younger child into the fray to retain the cuteness level due to the original cast growing old and bloated) – Will Poulter as their whining, sniveling cousin Eustace. Secondly, the awe and wonder of actually being in Narnia is also non-existent; these two Younger Snobs expect to be treated with obeisance now, not due to any feats of monarchy, but as a taken-for-granted condition, welcoming it as a kind of escapism from their dreary London existence in the Real World during WWII. Their hubris at landing back in Narnia (through a painting) and then being bowed to and fawned over fries my brain.

They meet Prince Caspian (Ben Barnes) helming the Dawn Treader sailing vessel, in search of some old guys with long swords and longer beards. He introduces them to his crew, “Edmund and Lucy – the high king and queen of Narnia.” Well, someone must be high, to believe those titles hold any credence…

This forgettable piece of CGI garbage, like its predecessors, is littered passim with Christ allegories, the most obvious being Aslan the Christ-y Lion, who appears intermittently to remind everyone how he works in mysterious ways. Liam Neeson voices Aslan, with as much verve as he played Qui Gon Jin, which means he phoned it in while playing with his Jar Jar Binks. At one point, Aslan appears in a mirror to Lucy – she looks at the room behind her, but he is not there, only in the mirror. Which means he’s some kind of anti-vampire. And if Aslan is anti-vampire, that can only mean one thing – he’s Taylor Lautner.

Director employs the tried-and-true B-Movie Directing Method of keeping the first take where no one flubs their lines. No characterization to speak of, everyone reading their sides dutifully and letting the special effects go to work for them. Only character fully fleshed-out is the mouse Reepicheep (Simon Pegg) – and he’s a special effect.

Every time the Dawn Treader docks, we brace ourselves for another pointless “adventure” that meanders nowhere and means nothing. Characters appear. Senselessly. (Example: if you haven’t seen the previous two movies, of what significance is Tilda Swinton’s ghostly appearance as the White Witch to tempt Edmund?)

Then magic happens. Over and over again. That last vestige of bad storytelling. Whenever you use magic in your story, the trick, so to speak, is to make it seem nonintrusive, organic; not like a deus ex machina, but something that has defined rules and limitations. In the NARNIA movies, like those execrable HARRY POTTER debacles, magic is used arbitrarily to drive the plot. It’s a contrivance, a convenience. Used, then ignored. But then, to a delusional christian fanatic like C.S. Lewis, Jesus is magic, so snap!

The captain mentions “sea serpents” and Edmund actually scoffs at him! Of course, in a land where animals talk and magic runs everything, there couldn’t possibly be sea serpents – that’s just crazy talk!

Then Eustace is turned into a dragon. By magic. Uh, okaaaay. Seeing as he whimpers about this plot point, we presume it was used to humble him… but if this brat was not humbled by all the evidence of magic and talking animals, what precludes him from becoming an even bigger arsehole when he acquires the mantle of a twenty-foot fire-breathing dragon?! Oh, these powerful demon-wings enabling me to fly and this breath that can immolate kingdoms is really making me feel small and insecure, and remorseful that I insulted everyone!… Who schooled C.S. Lewis on human nature – a minotaur?

After the boring climax fighting off that sea serpent that happened to be real, they all end up on the Island of Lost Toys or whatever and meet Aslan Lautner. As a perpetual tsunami kisses the shore but doesn’t break (like THE ABYSS), Neeson is now so freakin’ bored of playing this lion’s pixels that he’s making stuff up like, “I exist in your world as well, under a different name.” Hmm, let’s see: a guy who died and came back to life, a guy who lives in dark sanctuaries where your minions gather to eat your body and drink your blood, a mysterious being who can take many forms and appear in your dreams, a guy who can grant eternal life, yet a vengeful spirit who kills the good and evil alike without any discernment… Dude, in this world, are you Dracula?