The Lyin,’ the Snitch and the Whored Road.

Four bloodless, pasty-white British kids on an adventure in a magical wardrobe. 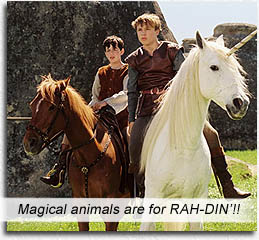 When I was 13, I loved the C.S. Lewis book so madly that I forced my mother to read it on the train on her way to work every day. Fast forward thirty years, I knew the film version of THE CHRONICLES OF NARNIA: THE LION, THE WITCH AND THE WARDROBE would not measure up to rose-colored memories, but the added sadness is that this allegorical tale of tragic satyrs, evil wolves, regal lions and accommodating beavers is not even my demographic any more (well, excepting accommodating beavers).

The irony: the demographic this film appeals to – don’t read books anymore! I imagine the first thing a youngster would do if they enjoyed this film is to seek out the Playstation game. (Sigh) You kids today with your miniskirts and your hula hoops…

Set during WWII, young teen and pasty Brit, Peter Pevensie (William Moseley) and his younger, pastier siblings, Susan, Edmund and Lucy, discover a wormhole in a wardrobe, leading to a land of eternal winter and constant special effects called Narnia. Two factions battle in this land (where every animal speaks English and is either CGI, or a human in heavy makeup): “good” animals pander to Aslan the Christ-y Lion (voice of Liam Neeson, who does more acting as this lion’s pixels than in all his screentime on PHANTOM MENACE), and “bad” animals aid the White Witch (Tilda Swinton, badly in need of a boyfriend or a vibrator).

The pasty Brit kids join Aslan, except for Edmund (Skandar Keynes), who is tempted to the side of the White Witch with Turkish Delight. (If there was any more evidence needed as to how infrequently these pasty kids get out in the sun or get out of the house at all, I think that Turkish Delight scam should tell you all you need to know.)

Also starring James McEvoy as Mr. Tumnus the Faun, James Cosmo as Father Christmas, Rupert Everett as a Fox, Jim Broadbent as Professor Kirke, and Ray Winstone as The Beaver (yes, I meant it to sound like that).

There are spectacular sights in CHRONICLES – centaurs and moving statues and mythical muscled beasts – which will no doubt entice the kids, but the messages of good versus evil come across loud and unclear. Just like a Disney movie on steroids, the contradictions and all the insufferable prophesy just make us feel stupid and dirty and insulted.For example, Edmund constantly betrays his siblings, yet is brought back into the fold after Aslan gives him a stern talk. We don’t hear the conversation, but we’d like it to go something like, “You do this again and I will rip your limbs from your torso and make you watch me bitchslap you with your own limp wrist!” but we know it would be closer to, “That was very bad, Edmund!” No lessons learned in earning absolution, or even getting the shit kicked out of you as retribution for being a Benedict Arnold.

It is no secret that author C.S. Lewis was an indoctrinated insane person, i.e. someone who believed fervently in christianity. So no surprise when Aslan gets all allegorical and sacrifices his life for the sins of others – and is resurrected. How very Jesus of him. But in a reality where resurrection exists, why can’t the White Witch resurrect after she is killed by Aslan at the end? Guess it had something to do with her midi-chlorian count.

And then there’s Santa Claus – the OTHER Jesus. Father Christmas (called “Christmas” even though Christ never visited Narnia) bequeaths the Brit kids weapons, even though his credo is “Battles are ugly affairs.” Thanks, Santa – leave the hardware and piss off! When Christmas hands an archery set to Susan (Anna Popplewell), and she asks, “What happened to ‘Battles are ugly affairs’? he just chuckles and changes the subject! Piling stupidity on stupidity, these “magic” weapons supposedly “work every time,” so why does Susan bother “getting in some practice” with them? And if they are NOT magic, getting in ten minutes of practice is not going to save your pasty British arse.

But we find that standards are pretty low out here in Narnia – all it takes for Peter to be knighted by Aslan is for a wolf to jump at him and for his sword to be in the way. Suddenly he’s “Sir Peter Wolfsbane.” Now… if the weapons are magical, then what credit should Peter take for the sword killing a wolf? These kids don’t earn one whit of their “battle” experience, yet they are lauded throughout the story as prophesied saviors of Narnia.

How come in any prophesy-heavy fiction (REVENGE OF THE SITH, LORD OF THE RINGS, The King James Bible) no one ever admits to a prophesy going unfulfilled, thereby proving what a load of bunkum it is?

The denizens of Narnia refer to the human boys as “Son of Adam,” which means Narnia believes in the Olde Testament, which means it’s a Creationist state (like moronic Kansas) – which means the thirteen-year-old cucumber who loved this story is liking it less and less.

The fact that the White Witch’s wolves speak the King’s English makes them less scary. It means they can be reasoned with. That doesn’t seem to stop the kids doing one stupid thing after another: in an effort to stop an ice floe from melting, Peter stabs his sword into the ice to use as a handhold – but wouldn’t stabbing the ice make it split exactly where he stabbed it? Instead, they all hold onto this lever and ride the rapids away from the wolves.

When they exit the freezing river, Peter, who was holding onto little Lucy by her jacket, now only holds her jacket and has lost Lucy. Susan looks at Peter and cries out, “What have you done?!” as if he meant to lose her on purpose. While I’m busy looking at Susan, all wet and cold, looking pretty damn hot – in a stuck-up, Catholic School kinda way.

Silliness continues to the end of the movie, director Andrew Adamson hoping he can sweep it under the banner of “kid’s movie” and throwing action battle at us like beaver at a strip club. But like Disney’s debacles, the treacle runs so thick it will choke children on unreality before they can enter the real world, wholly unprepared to be choked by its reality.

Like LEAVE IT TO BEAVER with better special effects. And actual beavers.