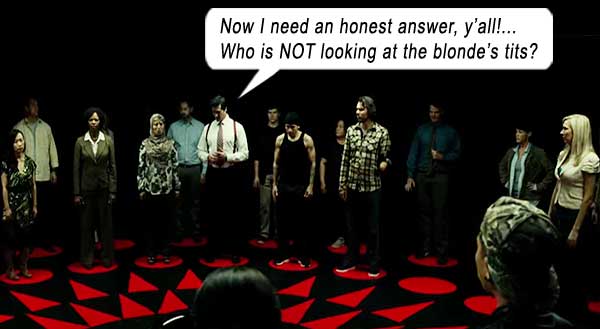 50 disparate people stand in a staggered circle facing each other, on some kind of technological dais, where the floor is touch-sensitive to their presence, so they cannot move off their individual space or touch each other on pain of electrocution. Black background, like some episode of LOST IN SPACE or THE TIME TUNNEL. Every two minutes, one of them is killed via an electric jolt and dragged into the mysterious black.

Is there a point to this arbitrary wastage of human life? Is there an escape from this immobilizing trap? Is there surcease from the ongoing trauma of wondering when your time is up? Is there a jockstrap big enough to hold the balls of these filmmakers?

A feature film debut from writer-directors Aaron Hann and Mario Miscione, CIRCLE is that rare pitch that immediately inspires provocative thought: 1 location, 50 people, each dying one at a time… (Y’know, I couldn’t find the budget for CIRCLE but I’m presuming that the whole production cost less than the hair gel budget for Captain America in THE AVENGERS.)

An ingenious ensemble piece featuring all unknowns (except maybe Julie Benz, a striking hotness who was in RAMBO and SAW V, and a few That Guys), no character is safe from the fatal electric jolt. What we think may be long-term characters to hold together a throughline, or characters ripe for redemption, or just plain better actors with interesting backstories, are unceremoniously cut down, leaving us at many intervals grasping for meaning as futilely as the protagonists in the Circle.

The characters can only interact verbally, soon discovering they have minimal control over who is to die next, by manipulating their hands to move lighted floor pointers to the person of their choice. They find they cannot vote for themselves, and if more than one person gets an equal amount of death votes, the Circle then makes the final choice on who dies.

Artfully woven into the desperate dialogue are unresolved social issues like racism, age-ism, politics, adultery, motherhood, altruism, capitalism, xenophobia. The existential question that keeps arising: Who amongst us is worthy enough to be the last person standing?

It’s a well-made thought-experiment, but cannot sustain the tension for a few reasons:

1) Once you come to terms with the inevitability of your own death, and once we as the audience come to terms with the fact that there is probably no way out for any cast member, no matter how sexy or kind or redeemed or useful to society – all hope IS lost. There is no more reason to hold onto life, which, it would seem, is not precious at all, if all the struggles of all these different people from such different walks of life, all come to nought.

2) Get 50 people in a room together. See what happens. I have no faith in humankind at all, especially with wildly differing intelligence and sociological strata, as in CIRCLE’s situation. The only “faith” I have in human nature, is that if you put enough humans together in a stultifying space, soon enough they’ll turn into a clutch of idiots that don’t deserve to live. There are certain points where CIRCLE tries to emulate the discordant natter of opposing viewpoints, but it fails at conveying the cackling shout-fest, politics-fest, ethics-fest, hot-button-issue fest, racist-fest that this claustrophobic situation would devolve to within 5 minutes. Not saying there are not intelligent people among these 50, but, as in real society, the intelligentsia is drowned out by the morons (cough-Dumbo Donald supporters).

3) As soon as someone mentions “aliens” – and it turns out to be a credible assumption – you lose me at anal-probing.

CIRCLE is to be enjoyed in the moment, within its 1 hr 27 min runtime. If you take away anything from it, it’s that humans are a clutch of idiots that don’t deserve to live.