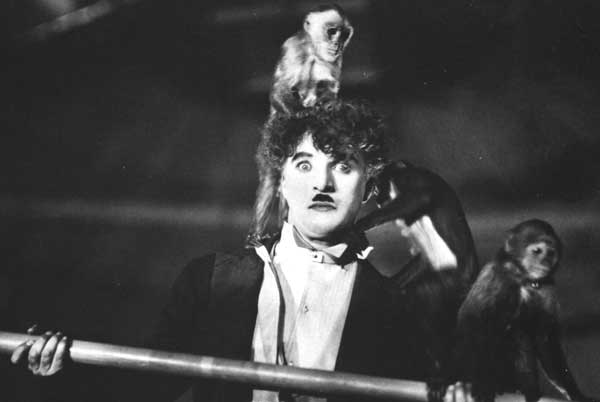 And lo, Jerry Lewis did cast his gaze upon Chaplin, and was smitten…

The Little Tramp joins THE CIRCUS.

A whirlwind story that finds Little Tramp (Charlie Chaplin) visiting a circus and, via a chase involving a pickpocket, being hired as a clown, finding love, learning to walk tightrope, losing love, and eventually leaving the circus in a bittersweet finale.

Written, directed and produced by Charlie Chaplin, THE CIRCUS is a fun diversion, with some pioneering gags (the mirror maze, the carousel chase, the clockwork dummies, the highwire act with monkeys!), however, it is not one of Chaplin’s best. I can’t shake the fact that the last few scenes are absurdly haphazard, and though the movie is praised by critics as a classic – and surely do I constantly raise my voice singing Chaplin’s praises as an auteur! – the finale of this particular movie dismantles his hero’s motivations offhandedly.

After Tramp and a pickpocket are chased by police into the main arena of the circus, and the audience cracks up at him, thinking it is part of the show, Tramp is hired by the Ringmaster (Chaplin regular Allan Garcia), who sees dollar signs in hiring this funny vagabond.

Tramp, on the other hand, only accepts Ringmaster’s invitation because he instantly fell in love with a beautiful woman in one of the wagons – the Ringmaster’s daughter (Merna Kennedy), whom Ringmaster regularly bashes and sends to bed hungry. These scenes are quite jarring to our modern sensibilities. It’s amazing it was acceptable enough back in the 20s to depict it on film so candidly.

Turns out when Tramp is “trying” to be funny – nothing happens. Even lessons from clowns simply turn into chaos. It seems that only when Tramp is trying to help (with magicians, with the highwire act, with a donkey) does he unwittingly keep the crowds laughing. To continue seeing the daughter though, Tramp does train hard, and eventually becomes a fixture in the circus as a clown.

One day, a tall, handsome cliché of a dreamboat joins the circus – the new tightrope walker Rex (Harry Crocker), who sweeps Daughter off her feet. We see this diversion as the “handsome/shallow” trope and think nothing of the fact that Tramp will surely end up with the girl, being the hero an’ all.

Despite all his romantic gestures, despite his efforts to retain her love, Tramp loses the girl in the end!

Over the course of days/weeks? that Tramp spies Rex making time with Daughter, he loses his funny bone, and crowds aren’t laughing any more. Ringmaster gives Tramp an ultimatum to find his mojo or be fired. 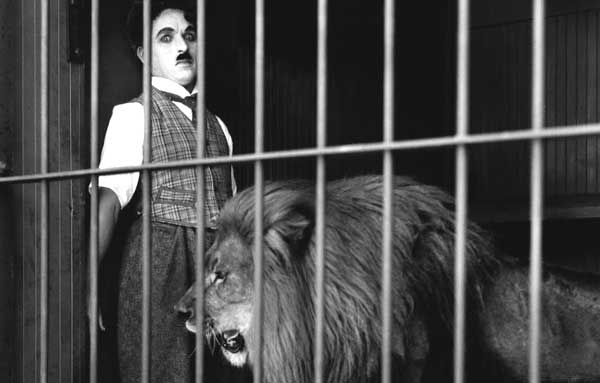 The worst time to have Schweddy Balls.

Rex is portrayed as hubristic, which causes us to further root for Tramp to end up with Daughter, but in the end it is Tramp himself who suggests that Rex marry Daughter after she is kicked out by Ringmaster. Only by being married to the circus’s star attraction will Daughter be able to return to the circus honorably, and it would also stop her beatings at the hand of Ringmaster, for Woman-Beating Protocol specifically prohibits a man to beat his daughter once she is married – then it’s the husband’s duty. Yes, these are the times that Republicans refer to when they talk about the “good old days” or “making America great again”…

The conclusion would not be such a letdown if it weren’t for the fact that Tramp fought so hard to win her back. Like every movie, our emotions are manipulated to invest in the hero’s goal. He even goes so far as to learn the tightrope, and must fill-in for Rex one night when Rex disappears, but the payoff is not – as we suspected/hoped – winning the girl, but simply performing the tightrope walk with credibility. And monkeys.

Upon learning of the trials plaguing this production (film negatives scratched, studio fire, death of Chaplin’s mother, divorce from second wife, IRS problems), we can empathize with Chaplin on why the movie’s denouement seems rushed. It all seems to wrap in five minutes flat, in the least satisfactory manner possible:

Daughter knows of Tramp’s affection for her, and begs him to take her when he decides to leave the circus, but he refuses, and instead marries her off to Rex. Is it because life on the road is rotten and he doesn’t want to put her through that? (In MODERN TIMES, he is more than happy to hit the road with the angelic Paulette Goddard, admitting that they had nothing but their love.) Or is it just to end the movie with the Tramp unattached for his next adventure? (Again, it doesn’t seem to matter with Paulette Goddard.) Was Chaplin hoping to portray an act of love in his character that surpassed his selfishness? Maybe, but he had an another option…

Ringmaster gave Tramp one last chance to be funny, and we presume Tramp succeeded because Ringmaster invites Tramp back into the circus family after his highwire act with monkeys. But here again, for such an accomplished director, Chaplin displays an uncharacteristic neglect: through the whole highwire act – undoubtedly the funniest scene in the movie – we do not see any audience reaction shots! With Ringmaster’s threat ringing in our heads, we would imagine Chaplin the director would show Tramp winning back the crowd and Ringmaster in cutaway shots. No, the highwire act might as well be performed in the vacuum of space. 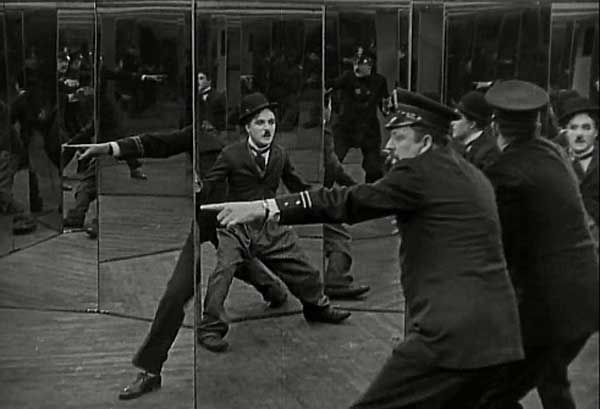 Even Flock Of Seagulls owes Chaplin!

And what are we to make of Tramp’s decision not to board the circus train as it leaves, even though he was invited back? Because – being a part of the circus again – he had a regular job and HE could have married the daughter. (He wouldn’t be destitute or homeless any more, and being married to Daughter would stop her father’s beatings as well!) Or is there something darker about the Little Tramp? He walks off, easy-come easy-go, after the train leaves, but does it say something about his character that he can’t or won’t retain a job that he is good at? Does it say something about his fidelity that he is more interested in the chase than the catch?

Despite the inventiveness of all his new gags, and characteristic shotgun comedic timing, it seems Chaplin did not examine too deeply what his Tramp’s actions were saying about loyalty and love. With a job in the circus and Daughter’s love, it could have been win-win, but Chaplin the writer decided to make it loss-loss for no apparent reason. To marry off the daughter to Rex when he clearly had other options makes it seem like Tramp is the shallow one, who was only after quick sex and then ease on down the road.