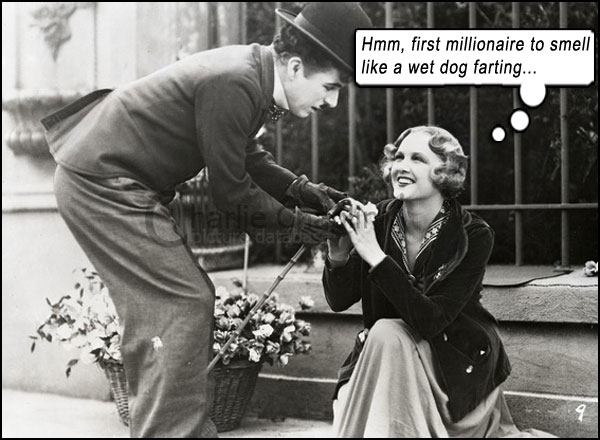 To be a Saint in the City.

Poor Alec was taken aback when Osborne crawled all over him and made him look foolish. But Alec was right. All due respect to his veteran status, in this instance Osborne showed himself as parochial as any old codger (he’s 79) yelling “Get off my lawn!” Even if you don’t like the upstarts, don’t dismiss them academically, Robert. But we’re not here to discuss Robert Osborne’s Comedy Advancement Trauma – we’re here to talk of Chaplin’s comedy advancement.

CITY LIGHTS takes it to the streets of a metropolis, blind to the plight of its lower classes, yet lavishing so much wealth on its upper classes they can afford to get blind every night. (The more things change, eh?…)

In this bustling, prosperous city, a poverty-stricken blind Flower girl (Virginia Cherrill) mistakes a Tramp (Charlie Chaplin) for a millionaire. In his fervor to woo her, he encourages the misapprehension. Befriending a drunken Millionaire (Harry Myers) seems to aid the Tramp’s cause – but the eccentric Millionaire can never recognize the Tramp whenever he is sober.

Chaplin writes and directs another silent masterpiece, at its core, a tale of pathos and unlikely love, advancing comedy to encompass more than just tripping over things and yelling a lot (thank you, Jonathan Silverman!), liberally sprinkling the piece with Chaplin’s now-customary clockwork staging of inventive sight gags played with the energy of machete-ing through a jungle.

The beauty of the gags is their staging: the Millionaire trying to commit suicide with a rope around his neck near a river – the Tramp attempting to save his life and inadvertently going into the river himself with the rope somehow around his neck. Blink too often and you miss the rigorous split-second timing of the japes: the Tramp in a boxing match hiding behind the referee in a perfectly synchronized balletic battle; a chair being pulled out from under one guy, to end up under another who doesn’t sit on it; the Tramp lighting a cigar in front of his face that he thinks is his, but is someone else’s… 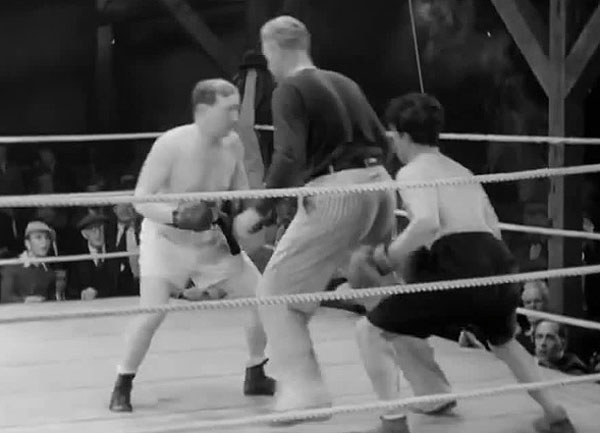 In its unobtrusive way, CITY LIGHTS also makes the veiled social commentary of the two classes existing side by side, showing the Flower girl and her grandmother in squalor (with physical affliction to boot) and the wasteful upper classes partying at all hours. Somehow the Tramp finds himself flitting between these two worlds.

And there is the love story, innocent and sweet as a caramel-dipped lump of sugar swimming in honey. Okay, maybe it will make you a little nauseous at how sweet it is… At times, Flower girl wonders aloud “why” a man would be so nice to her. Are you kidding, hotness? Have you looked in the mirror lately? Oh…I, uh, guess not… Still, we wonder at his intentions – surely he’s not after sex. People didn’t have sex in those days – babies were brought by a stork.

CITY LIGHTS was released in that transitional crossover period when “talkies” were replacing silent films. Chaplin stood staunch on his voiceless art, yet we hear many “synchronized” sounds – when the mayor gives a speech, we hear a representation of “voice” like Charlie Brown’s parents; when the Tramp swallows a whistle, every hiccup chirrups matching audio.

The innocence of the times (and of Chaplin’s style and demographic) warrants a happy ending, but even this is played very maturely for its time: Months later, the blind Flower girl has an operation to restore her sight (with money furnished by the Tramp via his millionaire benefactor); she runs a flower shop and perks up every time a top-hatted richie enters the store, thinking it is her man. But each of them treat her with indifference or disdain. After being released from jail, the Tramp walks by the flower store and Flower girl initially laughs at him, but – get ready with those hankies! – she realizes it is him from how he treats her – respectfully, like a person. Their eyes meet, smiling promise… The End. No kiss, no wedding, no ride into the sunset. It reminds us of Woody Allen’s enigmatic look at the end of MANHATTAN, or Tom Hanks’s hopeful gaze at the end of Zemeckis’s CAST AWAY. That’s how ahead of his time Chaplin was as a filmmaker – he is comparable to modern masters.

Maybe Robert Osborne is right about this being Chaplin’s best. But still, when Alec makes an insightful observation, give him some sugar, babe.