In movies, the good guys always seem to win court cases. Over an ingratiating orchestra swell, no less. But in reality, good or bad has nothing to do with the outcome of court cases. It’s how you play the game. If you can afford to be in the game in the first place. 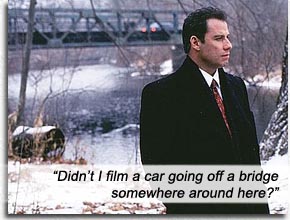 A CIVIL ACTION is based on a real life Massachusetts court case, novelized by Jonathan Harr, about a group of families suing two factories in their Woburn locale, accusing them of polluting the town water supply and causing the leukemia deaths of their children. The factories were owned by corporations, and though a settlement was reached, even as the pittance was being paid out, it broke the back of the lawyer who represented the families and destroyed the spirits of the already-shattered families.

John Travolta is lawyer Jan Schlichtmann, who informs us during the opening credits that a lawyer would be doing his clients a disservice were he to get emotionally involved with their case. Then for dramatic arc, and in real life it would seem, Jan went against his own principles and tongue-kissed the case to bed every night and woke with its morning breath in his nostrils every day.

Robert Duvall is veteran lawyer Jerome Facher, his doddering, distracted persona disguising a clinical tactician who outplays Jan at every step of the game precisely because he is not emotionally involved. And has no desire to unearth any ethics or truth in the case. When Jan tells him that the families he represents want the truth about the contaminated water, Facher replies amusedly, “Are we talking about a court of law? A court isn’t the place to find the truth… This case stopped being about dead children the minute it entered the justice system, the minute you filed the case.”

William H. Macy is Jan’s accountant, who helplessly watches the firm go broke against his desperate mortgaging of all their homes as collateral and selling all their office furniture; Tony Shalhoub and Zeljko Ivanek are Jan’s snowed under assistants.

John Lithgow is the forceful, biased judge, who plays golf with Facher. From the outset, Jan is battling the judge’s tripwire impatience as the new guy intruding into this Old Boys’ Club.

Kathleen Quinlan heads the group of families suing for the truth (one of her sons is dead), and James Gandolfini is a factory worker who harbors damning secrets about the dumping of waste chemicals. In his words – presaging the credo of what would become his most enduring character – “I ain’t a rat!” (THE SOPRANOS would appear literally on the heels of this movie and change his career forever.)

Jan tell us: “Odds of a plaintiff’s lawyer winning in civil court are two to one against. Your odds of surviving a game of Russian Roulette are better than winning a case at trial. So why does anyone do it? They don’t. They settle. Only one and a half percent ever reach a verdict. The whole idea of lawsuits is to settle – to compel the other side to settle. And you do that by spending more money than you should, which forces them to spend more money than they should. And whoever comes to their senses first, loses. Trials are a corruption of the entire process. And only fools with something to prove end up ensnared in it. And when I say ‘prove’ I don’t mean about the case, I mean about themselves.”

The judge breaks the case into segments, the first three months boring the jury to death with geologic education, in which time Jan’s firm went broke on scientists, physical evidence, soil experts, trying to swerve the case to the emotional hammer of kids dying, all the while being shunted towards bankruptcy by the continual obfuscating and objections of Facher. (In a flashback scene, we see Facher lecturing students about objecting to every detail, pointing out that should they fall asleep in court, their first words upon awakening should be, “I object!”)

In most movies, an eleventh hour revelation drives the Good Guys towards home plate, victory, and that annoying orchestra swell, but in A CIVIL ACTION, even as Jan uncovers damning evidence that would enable him to appeal the case, with an elusive eleventh hour witness, there is no money left for “justice” to be served. And “the law” – ironically – stands in the way: the long standing principle of res judicata, “that a matter once decided in a court of law remains decided – even if that decision flew in the face of reality.”

Co-written and directed by Steven Zaillian, co-produced by Robert Redford (always into “sensible” films with something to say), A CIVIL ACTION is a success as a movie precisely because it is such a major downer. It conveys an infuriating claustrophobia, that maddening feeling that we can’t, in fact, fight City Hall, no matter what Greg Brady says.

Schlichtmann becomes a shell of a man, obsessed with trying to do the right thing, sitting in his bare office with no desk, phones and electricity cut off and no future prospects. And it’s raining outside.

A late scene shows young punks throwing firecrackers across a river on the contaminated land; one of the firecrackers lands in the river and the whole river catches alight.

Movie ends with the Environmental Protection Agency getting involved – one giant institution against another; a clash of the Titans, if you will. In Greek mythology, only a Titan could destroy another Titan; and in the modern obfuscating world of blind justice – does anyone see the irony in that phrase? – it is still impossible for an individual to destroy a Titan, even with the best intentions and the Truth on their side.

Harr’s book ends on a somber, pessimistic note, but the movie was made after the book, with more current information. Closing text informs us that the two offending corps, Grace and Beatrice Foods, were indicted by the EPA and paid 69 million dollars in cleanup costs. Jan is now representing 60 families in New Jersey in another contaminated water case.

Is this guy a sucker for punishment or what?
END