Hash of the Titans. 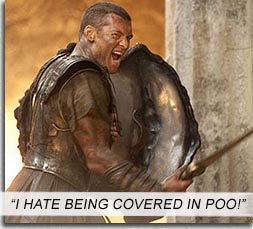 CLASH OF THE TITANS is written for 16-year-old boys, to be enjoyed exclusively by 16-year-old boys. Hell, I loved the 1981 original film starring Harry Hamlin and Burgess Meredith. When I was 16. The 2010 remake obviously has better special effects and much better-realized and refined supernatural creatures (as homage to the original film, the electronic owl makes a cameo), but the acting and the story have not graduated past the level of acceptance required by 16-year-old boys.

Perseus (Aussie Worthington, who just can’t seem to shake that accent as his ancestors Mel Gibson, Guy Pearce and Daniel Craig did), a demi-god in ancient Greece, must battle against the gods themselves when the city of Argos is forced to sacrifice its princess Andromeda (Alexa Davalos) to the gargantuan monster, the Kraken.

Like any story that involves religion, everything happens for irrational reasons and without motivation and without any point. Perseus’s very birth is laden with irrational backstory, as mortal King Acrisius (Jason Flemyng) feuds with Olympian god Zeus (Neeson), raiding Olympus every weekend, causing Zeus to rape Acrisius’s wife.

Let’s backtrack for a moment: How exactly do you feud with a god? And how does one raid Olympus? Isn’t it on another dimensional plane? And even if Olympus is just a physical abode resting on the lowest clouds, how do the ancient Greek soldiery (possessing no flying machines) actually “attack” Olympus?…Onward…

To rape Acrisuis’s wife, Zeus makes himself look like Acrisius to gain her bed – but being an omniscient god, why stoop to such banal subversion to overcome a woman? Just offer to fly her to Paris for lunch – she’ll be yours before dessert. Acrisius’s wife births Perseus, who is half-god, half-Australian. Acrisius, in a fit of rage, uh, waits nine months until baby Perseus is born, to entomb both baby and mother in a coffin and hurl it into the sea “to destroy Zeus’s seed.” Guess his “fit of rage” didn’t take into account it might have been easier to just stab the mother while she was pregnant…

Long story short: Perseus lives, becomes a fisherman, in a world which has started to defy the gods who created them. Soldiers destroy a giant Zeus statue and broham Hades, ruler of the underworld, immediately appears as a giant black pissed-off winged entity (with smaller bat-winged demons reminiscent of JASON AND THE ARGONAUTS) and wipes the floor with the soldiers. So what kind of cretin would continue insulting gods? (When the Greek scribes wrote this tale, did they not see the paradox of their plot point? In a world where gods continually give physical evidence of their power, just how stupid does mankind have to be to defy them? These people of ancient Greece were written with the sensibilities of people who lived in a world without gods, i.e. ours.)

As testament to this spreading impertinence, Queen Cassiopeia of Argos boasts that her daughter Andromeda is more beautiful than the goddess Aphrodite, at which point Hades (Ralph Fiennes, doing his best Gary Oldman), appears again and calls for Andromeda’s sacrifice – or he will release the Kraken (which we presume is a Very Bad Thing because he pronounces the name so terribly feyly). I was sure he said “OR” he would release the Kraken – but later, he releases the Kraken anyway to pick up the sacrifice. Hey, we made the sacrifice, why not send something not so dangerously fey to pick it up? You killing two birds with one stone here?

After Hades lays down his curse, Perseus unwittingly gets roped into the quest to stop the Kraken, which involves visiting Stygian witches, taming a Pegasus flying horse, lopping off the head of the gorgon Medusa and using it to turn the Kraken to stone. While Hans Zimmer‘s music makes it epic on toast. All in a day’s work for a demi-god. But Perseus spends half his skirt-wearing, sword-wielding time bitching about wanting to be a man not a god.

Perseus maintains to Zeus, “We live, we fight and we die for each other – not for you,” which again, is spoken like a man living in a world WITHOUT gods, or in a world with imaginary gods, i.e. ours. If the gods showed themselves and performed magical, physics-bending havoc when you defied them, I’m betting you would learn quicksmart how to live, fight and die for them.

Blaming director Louis Leterrier and writers Travis Beacham, Phil Hay, Matt Manfredi for these discrepancies would be like blaming Peter Jackson for the illogical happenings in THE LORD OF THE RINGS. The Greek mythology is already written – if the movie writers stuck to every detail and inserted every ulterior motivation of the complex characters, we would need a trilogy of movies. As a movie version of CLASH OF THE TITANS had already been written in 1981 by Beverly Cross, these remake writers simply took that script – and dumbed it down even further.

As illustrated by the box office, no one cares. In modern parlance, “going Greek” doesn’t involve mythological classicism.

Mads Mikkelson, Danish megastar and Bond Villain, is Draco, leader of the quest (he was never this hefty in CASINO ROYALE, but in CLASH, can’t stop looking like Dwayne “The Rock” Johnson); Gemma Arterton is Io (also a Bond character in QUANTUM OF SOLACE; here, a Google substitute whenever anyone needs info on ancient Greek mythology – and as she’s dodging giant scorpions we almost see her undies!).

The visualization of the creatures – from Flemyng’s Calibos makeup to the ferryman Charon, to Medusa, the Pegasus and the Kraken – is monstrously good, although I will say that Medusa should have been topless. She’s a snake-like monster who lives amongst ruins and turns people to stone with her stare; can you really see her adjusting her ornate bra for maximum push-up effect? I’m just sayin.’

But I do object to the giant scorpions – boring! All CGI arthropods, arachnids or insects make my eyes glaze over. One deus ex later, with the aid of rock creatures, everyone’s riding these useless effects.

The story makes an infantile decision to paint Hades as a “villain,” as if synonymous with the christian devil, but Hades was not a simple polar opposite to Zeus; Zeus ruled Olympus, Poseidon ruled the oceans and Hades ruled the underworld, which was called either Tartarus, Elysium or Erebus, and was a region ALL human souls passed through, not just “bad” ones. And Olympus was NOT the equivalent of christian heaven, it was the exclusive abode of the gods – NO human was allowed there.

Would that any human cast his unworthy gaze on Liam Neeson’s fake pirate’s beard and absolutely fabulous outfit; gadding about in a shimmering silvery ballroom gown made of chromium wings that is even gayer than his costume as Qui-Gon Jin.

The Stygian Witches prophesize that if Perseus goes after Medusa, he will die. Again, prophesy proven wrong. But no one seems to notice. Of what use then was the prophecy? And those rock monster guys who tamed the scorpions abandon Perseus, even though the prophecy said that he would die, not them! And they can’t be affected by Medusa anyway – cos they’re already rock! But who are we to speak of such logic – screenwriters?…

As a final insult to us, and the grandest misnomer of all: the twelve Titans of Ancient Greece were Cronus, Oceanus, Tethys, Mnemosyne, Hyperion, Themis, Thea, Iapetus, Phoebe, Rhea, Coeus and Crius. Any names you recognize from the movie? Of course not. When I was 16, I believed one of the Titans was the Kraken, the other Medusa, still another, Perseus. And though Zeus or Hades are erroneously regarded as Titans by some texts, they are merely offspring of Titans, Cronus and Rhea. So… a movie called CLASH OF THE TITANS which features not one actual Titan.

The moviemakers are just bending us over and going Greek on us.

You say “Kraken”; I say “tomato.”
How is it REALLY pronounced? In the original CLASH (1981), Olivier lazily pronounces “KRACK-en” like some kind of untasty biscuit; in CLASH 2010, Ralph Fiennes says, “KRAH-ken” like his wrist can’t get any limper; Liam puts stentorian force behind his “KRACK-en,” as does Bill Nighy in PIRATES OF THE CARIBBEAN 2; the two comic relief swabs in PIRATES dispute its pronunciation, while I prefer the open-tongued “KRAY-ken” myself.

Makes no difference: Every time I hear “Release the Kraken!” I’m reminded of Monty Python’s LIFE OF BRIAN when Michael “Pontius Pilate” Palin proclaims, “I will welease Woger!”