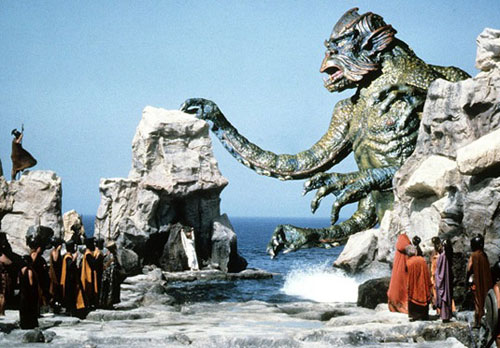 CLASH OF THE TITANS is written by Beverly Cross, directed by Desmond Davis, and stars Laurence Olivier as Zeus the king of the gods, but the man whose footprint makes this adventure fantasy memorable is the king of Dynamation – Ray Harryhausen!

Blank-faced Harry Hamlin stars as Perseus, son of Zeus, half god and half showroom dummy, who falls in love with Andromeda (blond and brainless Judi Bowker), but due to Andromeda’s mother boasting of her daughter’s beauty, Andromeda is destined to be sacrificed to the Kraken. With his magical appliances – sword, shield and helmet – Perseus vows to stop the sacrifice.

Aided by the man who trained Rocky against Apollo, Burgess Meredith, Perseus must first tame a flying horse named Pegasus, then chop off the head of the gorgon Medusa (who has that womanly power of being able to turn a man to stone just by listening to her), and use that gorgon’s stone-turning power to ward off the Kraken. It all sounds pretty scientific, so Perseus feathers his hair, exposes one nipple and flies off to get ‘er done. 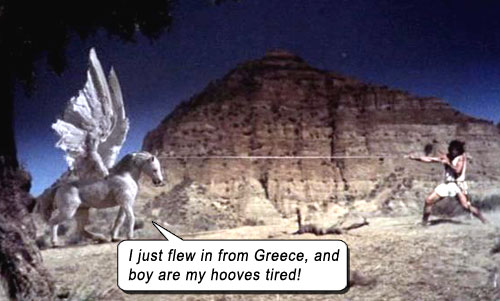 Example of the gods’ vanity: Andromeda’s mother boasts that Andromeda is more beautiful than the goddess Thetis herself. Thetis appears and curses Andromeda to become Kraken bacon. But who is playing Thetis, that she could possibly be so godawfully beautiful? Maggie Smith. Yes, Professor Minerva McGonagall believes she is more beautiful than a 24-year-old, alabaster-skinned, bulimic bikini model. Now that’s vanity.

There are only a few moments with Sir Lawrence Olivier in his heavenly realm, looking down upon the Earth with the other gods in their toga party maximus, although it becomes worthwhile when we spy Ursula Andress as Aphrodite in said toga. And by the way, there are no actual Greek Titans in this movie. Yup, none of the 12 Titans are mentioned or portrayed: Oceanus, Hyperion, Coeus, Cronus, Crius, Iapetus, Mnemosyne, Tethys, Theia, Phoebe, Rhea, Themis. Neither are their god-spawn (sometimes regarded as second-gen Titans): Helios, Selene and Eos, Leto, Asteria, Atlas, Prometheus, Epietheus, Menoetius, Metis, Astraeus, Pallas, Perses. Recognize any names from the movie – or even from the 2010 remake? It either goes to show how little people know, how little people care, or how little people are paying attention… 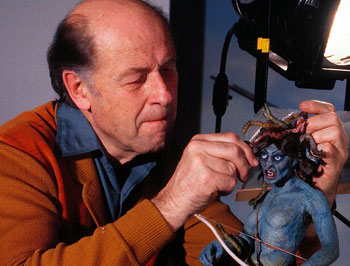 Ray Harryhausen – at work, or at play?

CLASH OF THE TITANS is a direct descendant of JASON AND THE ARGONAUTS (1963), with Ray Harryhausen on electric overdrive, at the apex of his stop-motion special effects career: the giant vulture, the clockwork owl, Pegasus the flying white stallion, Dioskilos the two-headed dog, Medusa the snake-haired gorgon, Calibos the goat-man, and of course, the magnificent multi-armed, gigantic amphibious terror – the Kraken!

In Greek myth, Andromeda was chained “naked to the rock” – diaphanous robes in this PG-rated fantasy – and Perseus swoops in on Pegasus and rescues her from the advancing Kraken while the royal court looks on, astounded. We’ve grown so inured to mind-warping special effects that CLASH OF THE TITANS has unfortunately dated considerably in this department, even though this would be the pinnacle of stop-motion thrills in its day.

Harryhausen would never top himself after this clambake. The actors and director, though, should shoulder some of the blame for the climax’s lethargy, as the effects only augment the story if the actors are in the moment. Sadly, these actors imbue this climactic action sequence with the excitement of a car insurance commercial.

In the end, it’s a lackin’ Kraken.