Class with a capital L.

CLASS ACTION is an interesting twist on courtroom drama. It contains all the unrealistic courtroom shouting and eleventh-hour reveals, but our attention is more focused on the drama between the father and daughter attorneys on opposing sides of the case. 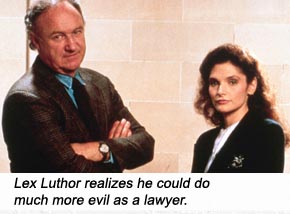 Gene Hackman is lawyer Jedediah Ward, representing a group of people in a class action lawsuit against a corporation. Opposing him is the corporation’s hired lawyer, Maggie Ward – his own daughter (Mary Elizabeth Mastrantonio).

It’s an intriguing dynamic because we are not sure who to root for: Maggie is young and demure, yet strong and principled, while Jed’s a seasoned alpha male ass, cynical and pragmatic; he’s a bull that won’t back down, and flashing that contemptuous Hackman leer. When Jed crushes Maggie at their first hearing (being prepared with motions and information two steps ahead of her, leaving her floundering and humiliated) we are predisposed to root for Maggie – but we are flustered when we remember she represents the corporation, an institution we have been conditioned to regard as intrinsically corrupt!

What to do, justice hounds?

Do we lean towards Jed because he’s Hackman; because he represents the “little guy” in a case against a corporation’s cars blowing up and killing people? Or do we support Maggie because she’s the underdog; because she needs to win a case against the brute lawyering of her father to step out from under his shadow?

He’s a philanderer, and the death of his wife – Maggie’s mother – makes him look even more cold-hearted, as Maggie cries and chastises him, with Jed making excuses for his affairs along the lines of “You don’t understand because you were too young!” Hackman dynamites another seemingly effortless nuanced role, Mastrantonio generally keeping up with him.

The case in CLASS ACTION is a sign of the times. Directed by Michael Apted, this 1991 movie came in that transitional period between the yuppie consumerism of the 80’s (with Gordon Gekko assuring us greed was, in fact, good) and the 90’s awareness that corporations and governments were in collusion to skin you alive. Corps were decidedly on their way out of America’s good graces.

So the emotional investment pendulum starts to swing the other way about halfway through the film. Aussie Colin Friels heads Maggie’s law firm – and he’s also doing Maggie kangaroo-style. Does it surprise us to discover he represented the corporation years ago in a cover-up of the faulty cars? And now he’s swung his lover onto the case in the hopes she will play ball and also do some covering up.

Fred Thompson is the corp CEO. In a chilling scene, he recounts a number-crunching, bottom-line statistic that shows even though their cars were prone to explode due to faulty circuitry, in the long run, the small percentage of explosions made it simply cheaper to deal with the lawsuits than fix the problem. Does it surprise us to discover he is Republican?

Jonathan Silverman is completely miscast as Maggie’s assistant, because he doesn’t get the chance to yell and trip over anything.

Discovering the CEO’s inhumanity is the first jolt, but when Maggie’s law firm offers her a partnership as a bribe, and starts arrogantly doing unethical things right before her eyes, her conscience lights up like a CEO on bonus day.

We must ask ourselves, Though it serves this fiction and drama well, has a lawyer EVER had an attack of conscience, even when they know their client is guilty as a devil on All Hallow’s Eve? Isn’t there some wording about “zealously defending your client”?

Which makes this movie a “What If?” tale.

What If all lawyers followed their consciences like Maggie? They wouldn’t have the fish-smelling reputation they now have, and “white collar” criminals would not be buying themselves out of punishment.

Corporations will ALWAYS win against the “little guy” because their finances are limitless, hence influence on the outcome of cases presided over by judges they play golf with. Lady Justice is portrayed wearing a blindfold to indicate objectivity; that neither identity, race nor affluence should be an impediment in meting out Justice. We all know the blindfold covers her eyes to Justice itself. She’ll never see what modern lawyers have done to her baby…. Shyeh, What If?…