As he did in AN INCONVENIENT TRUTH (2006), Al Gore talks up a storm. About storms. And droughts. And melting ice caps, and raging fires; THE CLIMATE REALITY PROJECT outlines the global climate shift exacerbated by what 1960’s science fiction films might have called “Mankind tampering in God’s domain.” 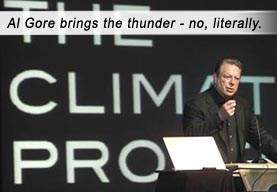 But something has changed in the, uh, “climate” in which Gore is delivering his message of hippy Earth love – and it has nothing to do with Gore himself or greenhouses or graphs.

It has to do with Krypton.

You see, when Superman’s father, Jor-El, warned the Kryptonian Council of their planet’s imminent demise, they poo-poohed him. And look what happened. Growing up with this fable, I constantly pondered why the Kryptonian Council didn’t conduct their own independent tests to discern whether their respected scientist warning of planetary destruction was right. And then, through experimentation, objective observation and empirical evidence, they would have discerned for themselves Jor-El’s conclusions. That was the only unrealistic aspect of Superman’s origin. Because – I erroneously thought – no one in the universe could be that close-minded and ignorant.

Then I met a Republican.

And I clearly see how a whole society’s negligence and willful ignorance can cost them their civilization and their planet. INCONVENIENT TRUTH was released when George W. Bush, with his Viking helmet wedged on sideways, was in the process of leading his party of mongoloids into the valley of ignorance. What has changed with the release of CLIMATE PROJECT is that in 2011 – with the Tea Party (Bachmann), the Speaker of the House (Boehner), the Mama Grizzly (Palin), the Crazy-Eyed Lady (Angle), another Cowboy Governor of Texas running for president (Perry), et al – those mongoloids have arrived, and they ain’t never goin’ t’leave that there valley. The uneducated nutjobs who embrace stupidity and know-nothingness, who try to out-talk their factual mistakes with more non-facts, who poo-pooh higher learning and do everything in their power to stultify schools, close down libraries, de-fund research universities, spread disinformation propaganda, who have blatantly vowed that their political agenda is not to ensure the country’s wellbeing, but to make President Obama a one-term president – these are the avowed imbeciles that Gore is now up against. 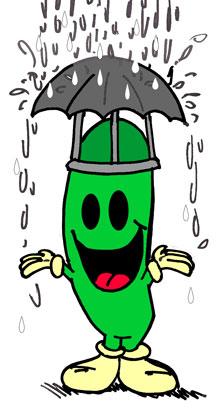 THE CLIMATE REALITY PROJECT opens showing us the disinformation campaign of the tobacco industry in the ’60s and ’70s (“Doctors recommend smoking,” “Smoking isn’t addictive”), revealing their key slogan: “Doubt is our product.” Making people doubt the scientific evidence was their goal, and they had no qualms in funding individuals to create phony science to achieve that goal. It looks ridiculous now in light of acceptance that smoking is detrimental to health. Consequently, the petroleum industry’s current arguments against climate change, juxtaposed against the outdated tobacco sophistry, look and sound embarrassingly similar.

And who is inextricably linked financially to the petroleum industry? The Republicans. So the arguments – the creation of DOUBT – only originate on one side – the “right-wing” echo chamber whose financial futures are tied up in technologies and industries that scar the climate; those muttonheads who don’t even believe or understand what they are demagoguing about. It’s just about keeping a job.

So though Gore seems more masterful now, though the facts and figures he presents are more alarming, though he shows us credible causal evidence linking Mankind tampering in God’s domain with climate change, and though he highlights solutions to curb those effects, no one on the Republican side is listening. And unfortunately, Republican votes are required to progress environmental policy. This is the “climate” that Al Gore is surrounded by – is drowning in – in 2011 America. And like the tobacco industry before them, the Republicans-For-Petroleum (mouthpieces too dumb to comprehend scientific method, just smart enough to parrot propaganda) deny the reality that is overwhelming them even as they pipsqueak against it.

And poor Al Gore ends up preaching yet again to the choir. To the others (Republicans and those who are fooled by Republican lies, hypocrisy and avariciousness), they might as well be on Krypton.

The fact that Gore has to use the term “Reality Project” should tell us everything: it’s an insult to the intelligent and those willing to learn; and to those who regard climate change as fantasy or lies, well, they’ll never believe it’s “reality” whether or not that word is in the title. We now know, after three years of irrational Republican railing against President Obama and the White House, the Republicans no longer live in a world of facts or rationale. The word “reality” panders to their stupidity, not to our intelligent debate over climate science.

And stop saying it’s a “moral issue,” Al. If you want to appeal to “them,” think like them – it’s a FINANCIAL issue. Their investments are tied up inextricably in carbon-based technologies and corporations. If you can show them how solar and wind-based technologies will make them fortunes, they’ll be on your side quicksmart. Not because of morals – because of money. That’s how low those swine are.

Allow me to get off the Republicans’ back for one moment and climb on the Greenies’ back. There are just as many avaricious assholes on the side of those who choose to “go green.” Let’s face it: “green” has become a fad. When the Saturn car company advertises one of its cars being built out of leaves and twigs to illustrate the corporation’s environmentalism, well – who the hell builds a car out of leaves and twigs?! Remember when the visual vernacular of “industry” included belching smokestacks? Now, when a new factory opens up, they show the woodland foliage and furry creatures frolicking within; they’re still producing non-biodegradable plastics and carbon-belching steel, but psychologically stroking the dumb public with visuals of the forest instead! NO ONE is in it for the good of Mankind. We’re just not built to be selfless on a grand scale. That’s why Superman likes us so much. We remind him of home.

Gore keeps coming back to a hypothetical scenario, that there may be an Earth out there where reality doesn’t matter – but on this one, reality wins out. Considering that Republicans and their non-reality stance actually accrue supporters, I’m not so sure.

Gore shows us clips of John Boehner and other two-faced liars, humanizing them by saying that he doesn’t believe they sincerely believe their rhetoric, and that they’re only parroting persuasive talking points. But Al, isn’t that reason enough not to afford them credibility, if they are hollowly repeating crap unthinkingly without verifying it? That’s not the mark of a leader whom you would give respect – that’s the mark of a patsy. It’s one thing if two opponents are arguing with the same ground rules – but when a party is not even arguing along the same lines of reality, making up “facts” and obvious lies as they go, throw them from the train. Of course we need to know who these people are and the offices they represent, but their obfuscating views need not be given further airtime on your documentary, Mr. Gore.

After many more graphs and alarming figures have careened across the wall-screen, Gore says, “We have to start with an acceptance of what the question is, so that the answer can be arrived at through the best traditions of democracy. Before we can get to the discussion and debate on how to solve it, we have to get to the point where we have agreement about what the reality is!”

Mr. Gore, have you learned nothing since your last outing? Because your most vociferous opponents, those Republicans, surely haven’t. Not only have they not learned anything, they’ve achieved a kind of negative-educative tsunami, with Fox News and Limbaugh and Palin and Bachmann and the rest of the congenital morons, spouting even more compelling non-facts and red herrings and straw men. Mr. Gore, you just said we need to accept the reality of empirical evidence before we can start a discussion. What happens when your opponents refuse to accept that reality?

Your essay on human development and betterment is not for them, Mr. Gore. Because they don’t care one whit for human or planetary betterment, just their own selfish, singular, insular agendas. If it takes more than one human lifetime, fuck it.

Yes, there was an Earth out there once, where reality didn’t matter. It was called Krypton. And look what happened to it.

A program of The Climate Reality Project, The Climate Project (TCP) represents a global force consisting of specially trained climate activists who are dedicated to educating people about the urgency and solvability of the climate crisis at a grassroots level worldwide.

With nine official branches and a reach in more than 50 countries, TCP supports more than 3,000 diverse and dedicated volunteers, all personally trained by TCP’s founder, Al Gore, to present an updated version of the slide show featured in the Academy Award-winning film, AN INCONVENIENT TRUTH.