Big secret: what is Cloverfield? They kept the secret pretty well when this movie was in theaters. 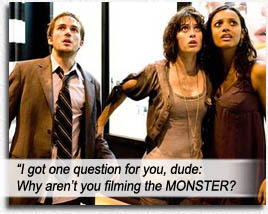 Not much of a secret. It’s a monster. Okay? A big monster that does the Godzilla through Manhattan. The good thing about this banal ripoff is that it is never explained. If you’re waiting for the obligatory “radiation” or “extra-terrestrial” origin, it won’t come.

The monster goes “RAAAARRRGH!”, buildings get broke, people get dead. The End.

So what’s the rest of this writing? I got nothing better to do – and you’re pretty much in the same boat.

“Cloverfield” is the code name given to the patch of East Coast that has to be nuked to eradicate the monster threat. And on the DVD, we see that the film-makers affectionately referred to the funny-looking, twenty-story monster as “Clover.” How cute.

Movie opens with a bunch of New York college kids in a hi-rise apartment, throwing a surprise party for one of their own who has scored a VP job overseas, leaving shortly. Was it too clever-clever foreshadowy that he was going to Japan?… You know, city of GODZILLA?

The Poffy of Liberty

The opening party scene is made to look as if it was done on a hand-held digital camera, operated by one of the douchebags at the party. So it’s choppy, shaky, amateurish and – here’s the teeth-grinding part – supposedly unscripted. Scenes of people interacting, giving “impromptu” testimonials, camera walking in on scenes in progress; reminds us of the grand opening wedding sequence in THE GODFATHER – only shit.I kept thinking, “If this hand-held gimmick goes on for very much longer, I’m gonna start peeling my skin off.” It’s not that the kids are BAD actors – they’re just bad “natural” actors. The irony in this age of YouTube and teens-filming-teen-bashings is that these kids can’t act like they’re NOT on camera!

Just as Brando raged onto the scene with The Method, overshadowing the “theatrical” actors of his day, now we have a new wave of “reality acting” insinuating itself into our culture, not necessarily “overshadowing” The Method, but carving a place for itself in certain types of media.

On film, unless you do it really well (Gary Oldman’s NIL BY MOUTH, Paul Greengrass’s UNITED 93), stick to The Method. These kids are, in effect, too trained in Method. They don’t look like they’re naturally reacting on a hand-held level – they look like they’re ACTING. And it screams inauthentic louder than the monster knocking down buildings.

Michael Stahl-David is the young VP, who, amongst the decimation, goes in search of his hot girlfriend despite her skyscraper leaning against another one; Jessica Lucas and Lizzy Caplan tag along; T.J. Miller is the douchebag who won’t stop filming even when his life depends on it – literally – and Odette Yustman is the hot gf.

Written by Dave Goddard, the hand-held format is ingenious in one way, as it provides exposition creatively, and only focuses on the action from the P.O.V. of these few kids, but all the little things start to bother: battery life – umlimited; audio – clear as Pro Tools can make it; the date stamp onscreen – whenever necessary, absent when intruding on the action…

…and it is not implausible that Douche should continue filming through all the adversity – we’re in the generation that does that, unmindful of consequences – but it’s implausible WHAT he films. For instance, when a screaming 20-story monster is rampaging one block away, in clear view, with soldiers firing on it, what sort of a retard would focus on his friends across the street?

For the movie’s purposes, the camera has to take in as much of the story as possible, whereas a real-life partying douchebag would no doubt be transfixed for all of this cam’s unlimited battery life by the skyscraper-sized terror right in front of him.

There is the iconic image of the decapitated Statue of Liberty – used in all the trailers. Question is: unless this thing came out of the water near Ellis Island, why would it make the tourist trip TO Ellis just to knock the head off that lady in the harbor?

The monster effects are extremely realistic, and its unique design was reasonably cool – but then it started dropping off insectoid creatures for the sake of the special effects techs who find it so easy to generate these things now (STARSHIP TROOPERS, KING KONG 2005, LOST IN SPACE). Those little crab-like things were a continual annoyance. The movie was on its downslide at this point.

Then it really lost me – when it did that thing that all these teen movies do eventually – make unintelligence a favorable trait. The camera guy says, “Maybe the monster came from a crevasse under the ocean,” and one of the girls gives him a look like he’s talking Plutonian, whereupon this gutless dweeb immediately changes his wording: “I mean – a crevice.” Nice flip-flop, tool! Systematically driving down not only the intelligence level of the country, but the DESIRE to possess intelligence. How come no one ever retorts with, “I’m not using any words that aren’t in the English dictionary. What’s your problem, not educated enough?!”

Immediately on the heels of this stupidity, the chick who gave him the look criticizes him for being stupid!

This whole plot device of a guy going after his girl is wearing thin with me. After all the mundanity of a monster knocking over buildings, they dial it down to the level of boring chick-rescue movie, then dial it down further with the deplorable acting when we find the gf with a rebar beam through her shoulder and in the next scenes, she is raising her arms as if there isn’t a gaping wound through her torso. Oh, and that shoddy hand-held camera-work? – through the whole nauseous movie! (I need a skin graft…)

Then the film-makers pretend like they’re blasting out on the edge of originality when they have all our stars die at the end. By that point, I was kinda glad.