The UnMotivation of Terry Silver.

Well, we got the exceptional Season One (The Rebirth of Johnny Lawrence,) the very good Season Two (The Re-emergence of John Kreese), the fan-service Season Three (the Reboot of Kumiko and Chozen and Ali with an I) and now COBRA KAI SEASON FOUR, that re-tools the psychopathic tool from KARATE KID 3. Yes, it’s Terry Silver (with his trademark “I’m-an-asshole” ponytail now a distinguished grey), his character written so lackadaisically and with such fabricated motivation that it puts Fonzie on his skis (i.e., the Season has jumped the shark).

The showrunners of COBRA KAI (Josh Heald, Jon Hurwitz and Hayden Schlossberg) made a big mistake with Terry Silver (reprised by Thomas Ian Griffith) – they made him rich. When Kreese (Martin Kove) visits Silver to tempt him back to Cobra Kai, we discover Silver is not just Daniel-car-dealership rich, more like mansion-overlooking-beach rich; corporate-CEO and wine cellar and butler-serving-him-breakfast rich. So – is there ANYTHING that Kreese can offer Silver that will lead him to forsake this 1% lifestyle and dive back into the karate problems of tweenies?

The bad writing tells us there IS.

And that bad writing… starts immediately, as Kreese chastises a guest at Silver’s vegan brunch: “Karate is not a phase – it’s a way of life – you can leave it for a while but it never leaves YOU.” Uh, karate – like every practiced discipline – is a perishable skill. It DOES leave you. Everything Kreese says hits awkwardly or stupidly – one of Silver’s guests calls Cobra Kai “adorable” and Kreese says later, “the Terry Silver that I knew would have roundhoused old foureyes back there for calling Cobra Kai adorable.” Which means the Terry Silver you knew was an unbalanced bitchbaby with no social skills. 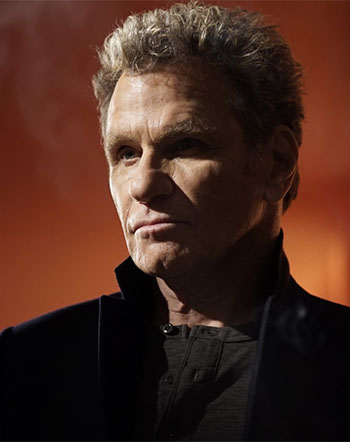 Sensei Kreese: a trove of tropes.

Kreese continues, “People needed to learn some respect, some discipline…”
– I guess roundhousing that guy shows respect for his opinion. And calling him “foureyes”? Also very respectful!

“…there’s a whole new generation out there that can use what we know…”
– man, are you on this millionaire’s sundeck overlooking the Pacific and trying to tempt him with a karate tutor position in a dojo in Reseda?

Kreese says LaRusso and Lawrence are working together so “That’s why I’m here. I need a partner”
– uh, wake me when this becomes relevant to the millionaire.

Silver actually nails the irrelevancy when he declines, “I spent months terrorizing a teenager over a high school karate tournament. It sounds insane just talking about it!”

So the writers play their trump card (– or is that trope card?), making it so that Silver owes his life to Kreese, for saving him in Nam. Vietnam is like Woodstock – everyone was there! Thus, the filmmakers retcon a whole buncha bromancing flashback scenes, with Silver telling Kreese he’ll do anything for him.

And that bros-before-Cointreaus reason is what drives Silver back to Kreese – YET – the writers keep playing Kreese as if he’s offering some kinda spiritual edification to Silver: “Did you just lock those memories away so long, you forgot who you are?”
– WHO HE IS? Maybe he’s a classical pianist –
Opening Silver scene shows him tearing up the keys with Franz Liszt’s Grandes Etudes De Paganini S.141: No 3 in G-sharp minor. Do you know how many years of solid devotion it takes to be able to play like that? So who does Kreese think Terry Silver REALLY is – a bully of young boys?!

The stupid thing is: the writers make Silver respond to Kreese as if he’s affected by Kreese’s rhetoric. Now many of you might say, because Silver IS an inherent bully and that’s what draws him to Kreese’s offer – an outlet for his truly villainous personality. Sure – if he was working at a car wash in East LA.  But Terry’s life is the upper echelon of wealth. He’s had every opportunity to channel his bullying streak towards every person he trampled on the ladder up the business world. How is any of Kreese’s low-rent rhetoric affecting his psyche?

Kreese’s every line is idiotic: “People expect men of our age to pack it in and go off into the sunset…”
– yeh, when you’re rich you can DO that, Kreese.
“That might work for you…”
– uh, it HAS –
“…but I still have some fight left in me…”
– Fight for what exactly? You’re trying to make me jealous that you teach karate at 70? Again, how is this relevant to my lifestyle on this beachfront property? And what do I need to prove by rejoining Cobra Kai? That I can sidekick a girl? 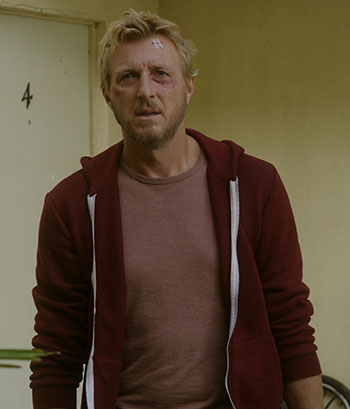 Okay, so is Kreese trying to re-ignite Silver’s sadism and apply it to his dojo? If so, then why does Kreese come round to a redemption himself, learning to admit that Cobra Kai is extreme? Is Kreese giving Silver free reign to teach his kids psycho ponytail wearing? No. Silver always remains second banana to Kreese, who actually berates him at times, telling Silver, “But you need to fall back in line, and follow my lead…”
– what?? To a guy who has nothing to lose by stepping away… back to his 1% lifestyle! Kreese has really made it hard for Silver to stay in this dojo that smells of man-funk.
And he tells him this, right after Silver has bought new costumes for the whole dojo!

Which raises another question: How is Kreese PAYING Silver? Sure, Terry’s a millionaire, and he’s doing Kreese a solid, but surely Kreese must have offered Silver 50% income for being a PARTNER in this business? But then, how can Kreese – one step above homeless – afford this? And let’s face it, any percentage would mean squat to the millionaire. And if Silver isn’t accepting pay, then why is he doing it for free? To fulfill his vow? Does Terry return to his mansion and chef and silk bathrobe every night? Because it’s implied he’s shacking up with John Kreese in the back room of Cobra Kai, sipping on man-funk…

When Silver rejoins Cobra Kai, first thing he does — is beat up Robbie (Tanner Buchanan), all with a dungeon smile on his face. What a swell guy. Still beating up teenagers. But then the writers temper his sadism when he advises Robbie, “Dig out that fear and face it, cos if you don’t, it’s gonna hold you back forever.” Oooh, is this the sort of mentorship that Silver has been missing? You mean in all his years as a CEO he’s never ever ever given this advice at a conference? Speaking of which, doesn’t he have conferences to attend and meetings to preside over, and documents to review and stock decisions to make and payroll to sign off and — How has he got all this time to promote kicking children?

At different ages, different things hold importance in our lives. As a younger man, Terry Silver loved bullying kids and winning karate tournaments. But now – he’s been to the top of the business world AND been in Vietnam as a youth. He has committed atrocities and seen things that cannot be unseen; he has let friends die, and sacrificed women and children. And he also did some things in Vietnam!

In Episode 5, Silver admits to Kreese, “You were right about me, John. I was living a lie.” Oh, so you were “rich but unfulfilled” — But unlike a poor person who is unfulfilled, YOU have the ability to change your situation instantaneously. So let me get this straight: you got therapy and went into business and conquered the stock market and devoted your 10,000 hours to mastering a musical instrument; you have unlimited finances and resources and all the chicks you can eat…. but what you REALLY want to do is karate.

So – is Terry Silver the GOOD guy? Helping these kids with his wealth? With no profit motive in mind? Well… here’s where the writing almost redeems itself: in the last few episodes, we see some inkling of a motivation when Silver keeps promising he’s going to open a chain of Cobra Kai dojos across the valley – now we see his businessman’s mind kicking in; and for all the seed capital he puts into the franchise, I imagine he’ll very quickly write Kreese out of that contract, and make all the profits himself. And so he does – his last act of the Season is to frame Kreese for a felony, to steal Cobra Kai out from under him— Ah, so he’s playing the long game: he built a business empire, so that he could one day — run a karate franchise. 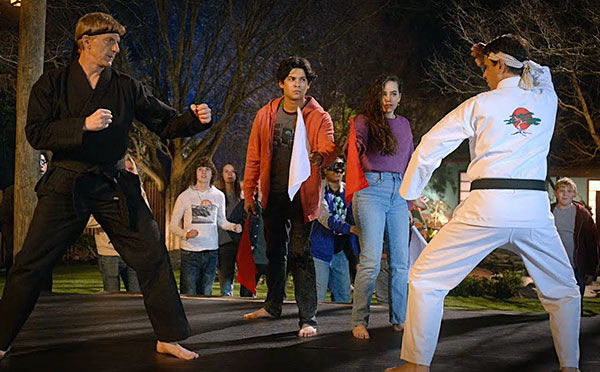 Sensei LaRusso: The Way Of The Girl-Slap.

All the other characters and situations still retain that COBRA KAI flavor: Johnny (William Zabka) coming to terms with Daniel (Ralph Macchio) stealing away his surrogate son (Xolo Mariduena), and trying to reconcile with his real son, Robbie; Daniel balancing his teaching against Johnny’s impulsiveness; the constant ups and downs of Daniel’s and Johnny’s hilarious love-hate relationship; there are some touching redemptions, and they’ve even gone off on a little subplot about Daniel’s son being a bully! Ha! It would still be a solid 7-star series, if it weren’t for Terry Silver’s non-compelling presence informing the main plot points, and therefore, creating adversity where there can easily be none. They keep telling us we should be scared of Silver, but for Silver, there’s nothing at stake. He can back out at any time and go back to his lifestyle of the rich and famous, and we just- keep- wondering- why- he- doesn’t!…

Terry Silver proves that COBRA KAI has run out of villains. Not only villains – they’ve run out of heroes as well. When Silver triumphs at the end of Season Four – SPOILER ALERT! – who can Daniel turn to, to combat this psychopath’s existential evil?

Enter Chozen. [DUN DUN DAAAH – but played on a kazoo…]

Yeh, if that name didn’t give you any chills, it’s because Chozen has less cache than Terry Silver’s vegan girlfriend. The producers are thinking to expand this cardboard role into the conquering hero of Season Five? Oh, and there’s talk about Terry Silver calling in MIKE BARNES– Who the fuck?— … ooh yeh, he kicked Daniel in the nuts once.

I can see it now: Chozen cannot turn back Terry Silver’s and Mike Barnes’s B-character sadism – so in Season Six: Prepare – for the return – of Mr. Miyagi–s cardboard cutout…