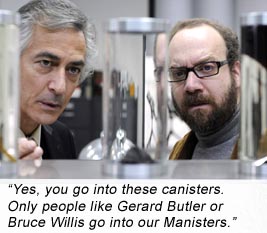 Apparently, losing your soul makes you act like William Shatner.

A darker journey than ETERNAL SUNSHINE OF THE SPOTLESS MIND and a blacker comedy than BEING JOHN MALKOVICH, COLD SOULS is a disturbing, unique gem of a movie. Crafted by writer-director Sophie Barthes.

The real Giamatti – as game as the real Malkovich – plays himself, who approaches the soul storage issue not without a realistic amount of skepticism. Emily Watson plays his confused wife. What sells the movie’s touchy premise is that everyone plays it dead straight. They live in a reality where soul extraction and storage is possible, so it is like any other new medical procedure involving a big futuristic machine that looks incomprehensible.

Giamatti is sold by the expertise and straightforward sincerity of Dr. Flintstein (David Strathairn), who shows him a range of souls in small glass canisters, all manner of amorphous shapes, but, as he explains, though we imagine the soul to be colorful, they all surprisingly come in shades of gray.

When his soul is removed he is asked, “How do you feel?” Other than “hollow” he says he feels great, albeit saying it in a blank way. (Still, I was just wondering, as per the Christian Handbook, don’t you need a soul to feel anything?)

He goes back to his stage play, and though not in anguish any more over emoting, he is not anything any more. His “dead face” assumes prominence between rehearsal takes that sound like Shatner on ice. Giamatti is such a great actor that he can actually act like he can’t actually act. Or at least act like Shatner can’t act.

Meanwhile, in a parallel story that provides the darkness and disquietude of this experience, Russian Nina (Dina Korzun) illicitly assumes Paul’s soul, transporting it to Russia in her body. In the trade, she is called a “mule,” a “soul train,” if you will, who loads up a soul in America and brings it back to Russia at the behest of her boss. The boss’s wife (sexy Katheryn Winnick) wanted the soul of a “great American actor like Al Pacino or Johnny Depp.” Besides the two gags in that line, we secretly revel at our inside knowledge that Giamatti is on par with Al Pacino, just not famous for it.

Giamatti realizes the soulless Shatner Method is only useful to one person in the universe, so must take on the soul of a Russian poet to put the heart back into his performance; then embarking on a quest to Russia to put the soul back. But first he must convince the blonde who thinks she is imbued with Al Pacino.