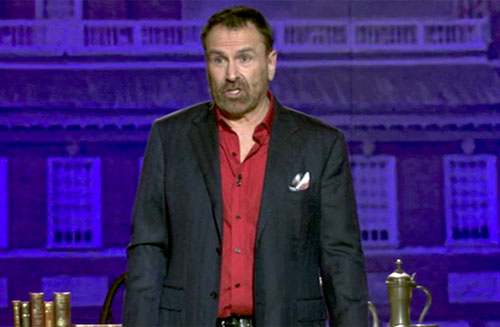 Standup comedian Colin Quinn flexes his brain bone – and incites Americans to flex theirs – in this refreshingly intelligent take on the U.S. constitution. Now all we need is for Congress to grow a brain and listen to him.

UNCONSTITUTIONAL finds the Noo Yawk raconteur in his finest form. Ever. Always been a fan of Colin Quinn’s scattershot comedy; have followed his career as generally as anyone with a cable and internet connections, but this feature has cannoned him above the morass of his contemporaries who pule about girlfriends and pets and being stuck on planes with screaming kids.

He has a love for it, but knows it is not sacred. He’ll abide by it, but knows it can do with improvement. He reminds us the United States constitution was written during a convention – a four-month bar crawl in Philadelphia. Therefore likens America’s psyche to a forgetful, boastful, irresponsible drunk. Respectfully. He has done his research, he is no stranger to this arcane document, and quotes it freely, fluidly, not by rote, but through an abiding comprehension, interweaving it with the flow of jokes, diversions and analogies; paraphrasing THE GODFATHER, taking jabs at Jeff Foxworthy, the Kardashians, Wayne LaPierre, megachurches… Quinn’s style has always been tangents and peripherals to the main topic, we can see his mind working faster than his mouth, yet this set is a tight, cohesive juggernaut of educative hilarity. And Quinn is the perfect instigator for this political discussion because he is neither left nor right politically, but so Middle that any way he turns will be more Middle: “…pro-choice, pro-gun, pro-death penalty, pro-gay marriage. What do they add up to? Anti-overcrowding.”

Quinn reminds us the Founding Fathers prohibited the press from attending the brainstorming sessions, as they foresaw it would devolve to Reality TV – or the 1780’s version thereof. It was time to get serious, time to get real, time to break with England. Yet Quinn is not averse to admitting the idealism got lost somewhere along the way: “It used to be MR SMITH GOES TO WASHINGTON, now we’ll take a scene from RESERVOIR DOGS…”

Quinn’s rapid-fire extolling of the constitution’s underlying concept – to get rid of the class system that America left behind in England – echoes the current call to arms that an Englishman (Russell Brand) is now making to world societies (in his insightful book Revolution). It goes to show that those Founding Fathers (Washington, Jefferson, Madison, Franklin, Adams and the rest of the Ringos) actually got the concept right, but the reality of power and the avarice and privilege of leadership just kinda got in the way.

Whenever a comedian’s “observational humor” tilts into actual “sociological issues,” in my book, they’ve won. If they do it artfully enough, they extricate themselves from the engine pit and deep-gouge their name in history books.

Filmed sometime in 2013 somewhere in New York (y’know, I’m sick of doing web searches that won’t specify dates, times and locations – fuck you, Internet!), Quinn brings it full circle to end this one-man show with a solution. Citing Canada as a suitable referee to step in and give America a pep talk, he advises the Land Of The Free to take some time to work things out… eat, drink… take four months…

In Philadelphia. No press.