The Trials of Talent, The Farce of Fame (oh, spare me!).

When David Cassidy complained about being exploited in the Partridge Family, just who did he think was playing the instruments and writing the songs he mimed to? 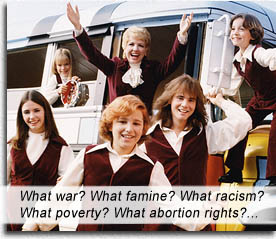 Narrated by the real Danny Bonaduce (in between jail time and radio airtime, we presume), COME ON, GET HAPPY: THE PARTRIDGE FAMILY STORY is a tiresome television biopic of The Partridge Family’s rise to popcorn fame in the early 70s. A travesty at best; at worst, some form of mild brain damage, with the David Cassidy character (Rodney Scott) whining almost as well as David used to…

If it is at all possible, acting is even worse than the actual Partridge Family members.

Scott, who looks more like Cassidy the longer the film runs (cos of that brain damage kicking in) complains he is not being taken seriously as a musician. He can really sing and play guitar, yet because the studio “bought” him, he is not being allowed to extend his full range of talents, and he is merely on a salary instead of being paid a percentage of all the records he actually sings on.

These are the trials of fame, young squire – but wait, you spoiled brat!

The irony is that all those really hot session musicians who actually played on the Partridge Family songs were the ones who were bought! Those real musicians who didn’t have perky breasts and prettyboy faces, who were eternally behind the scenes, who made the morons diddling their instruments look talented – they were the exploited ones! Not only did they do their jobs thanklessly behind the camera, I’ll wager their salaries were far smaller than that of those “stars” in front of the camera.

It is no secret that during his Teen Idol years the real David Cassidy did whine about not receiving any profits from all the dolls, lunchboxes and likenesses of him. Cassidy was a good vocalist, no doubt – no Pavarotti, of course (but I’m wagering Pavarotti never posed nude for Rolling Stone – oh! those controversial pubic hairs!), but at least he was on camera and achieved the fame to build on his career.

Cassidy has had a full career because of that fame; Susan Dey and Shirley Jones have enjoyed continuous television careers, and even that fuckup Danny Bonaduce (with all his arrests and addictions and jail time) can get work. The rest of the kids faded out because – well, they were untalented little snots.

And so we end up with this guy playing Cassidy the fake rockstar, whining about not being real, in a real TV movie about a fake musical family in a real TV series… while the session musicians who are playing the fake Partridge Family music are given as much credit as the musicians who played the original Partridge Family music – none at all. Is this irony or that brain damage again?

Where is that poor bastard who played the famous opening keyboard riff to the Partridge Family theme, C’Mon Get Happy? What’s his name? Where’s his action figure? Name any of the real bass players on those soppy tracks: I Think I Love You, I Woke Up In Love This Morning… What about the slick drummers? Those guys got the raw deal – not David Cassidy!

Watching old videos of the Family miming, I feel dirty every time the camera pans across anyone besides David, who is at least miming his own voice. (And what pretty eyes!)

In a Gallup Poll during the Partridge Family heyday, Danny Bonaduce was named the second most famous bass player behind McCartney – just for holding a bass guitar around his neck and flapping his untalented sausage fingers!

If fame can ever be construed a harsh mistress, it is because Danny Bonaduce can be mentioned in the same breath as one of the pioneer geniuses of rock and roll.

Come on, get happy, indeed! Come on – GET REAL!

(Sorry if opening up the link and listening to the theme song has made it stick in your head. What can I say? – those SESSION MUSICIANS were catchy songwriters. So sue me. Better still, beat me and call me Susan. I’d like that…)

4 Comments on “COME ON GET HAPPY: THE PARTRIDGE FAMILY STORY”