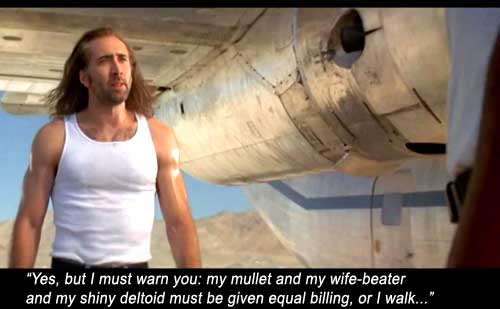 His pooch hairdo effectively takes attention away from his massively-developed arms and Kirk-body-oiled man-chest.

A prisoner plane, the CON AIR of the title, transporting the biggest bunch of cliched criminals this side of Blockbuster Screenwriting 101, is overrun by said archetypes, led by an exceptionally-maladjusted Malkovich. Elvis comes to the rescue in the form of morose Nicolas Cage (one of the “good” convicts – no rape, murder or listening to Hansen music – therefore the anti-hero), who eventually commandeers the craft and lands it ostentatiously on the Vegas strip amidst traffic.

Written by Scott Rosenberg (with that Blockbuster Screenwriting Guide on his lap): the twisted mastermind (John Malkovich), the quiet serial killer (Steve Buscemi), the Badd Mexx (Danny Trejo), the black guy (Ving Rhames), the gigantor redneck (M.C. Gainey), the gopher (Dave Chappelle), the sick con who is automatically regarded as “wrongfully jailed” simply because he’s sick and a friend of the Anti-Hero (Mykelti Washington), even the obligatory fruity gay guy). Simon West directs with the Michael Bay Handbook on his lap.

The great John Cusack is completely wasted as a Marshall pursuing the hijacked plane and bland Monica Potter has outdone herself – in a career of vapid, unconvincing roles, this is surely the best and blandest in her reel, as Cage’s wife, awaiting him in desperate ambivalence with a daughter who looks like she was cast five minutes before cameras rolled.

Everyone pretends to be really Hard (even the winsome Dave Chappelle!) and there are lots and lots and lots and lots of pretty orange explosions and guys diving in slow motion while shooting big guns, but ultimately this movie is just another excuse to land Nicolas Cage in Las Vegas.

So bad I accidentally grew a mullet.