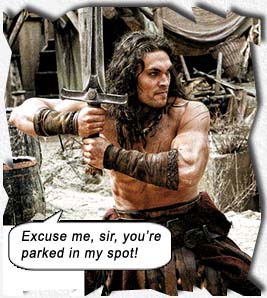 Just how much blood can spurt out of a human body when it’s slashed with a sword? Seems like you could fill a good-sized mopping bucket…

Jason Momoa is Conan the Cimmerian. And he’s awesome at it; bestial physicality, rugged athleticism and even a disarming smile; depravity and humanity rolled into one. Like Arnold before him, Momoa perfectly embodies Robert E. Howard‘s fictional medieval warrior, muscles thrumming, brain on standby, dick locked in the upright position.

As the slogan’s say, “Born on the battlefield” – they really went literal, as we see a heated battle in a village, then a pregnant woman swordfighting, then an interior shot of Conan in the womb, and a sword slicing through uterus, almost skewering him. Conan’s father (Ron Perlman) must slice open Conan’s mother to birth him on said battlefield. Gory? Oh yes. Gratuitous? Oh yes please.

As a youth, Conan provides many bucketfuls of blood to his village (that we presume has a bucketful-of-blood shortage for the amount that he elicits from some nameless roaring man-things).

Then madcap warlock Khalar Zym (Stephen Lang) slashes through Conan’s village, seeking a piece of legendary amulet which Mr. Conan (Perlman) is hiding. While both Conan and Mr. Conan are being tortured by Zym, his freaky daughter (on loan from the DUNE soundstage) psyches around reading minds. This chick would grow up to be Rose McGowan, scarier and more deformed than any Sandworm, with a strange predilection for inappropriately speaking to her father Zym as if they’re about to have sex. 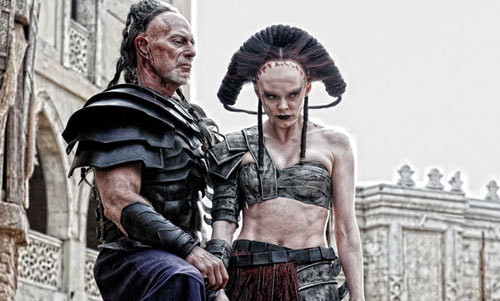 He saves the life of damsel Tamara (Rachel Nichols, so groin-achingly ripe and luscious, I forgot how I was going to demean her with a childish sexual remark), who joins his quest, and reminds us why chicks should be seen and not heard. Her life being saved by Conan, you’d think this wench would give him a little sugar, but no – she’s a militant feminist who wants equal rights and yammers about being treated with respect. That’s fine – I could still respect you while I’m inside you. And don’t even think about calling yourself my equal when I’ve spent the last 20 years wielding a sword and you’ve spent it bathing in ambrosia. Just shutup and be beautiful, okay? Do you not realize I saved your life purely on the strength of your flawless jawline, aquiline nose, unblemished skin and presumably ambrosia-tasting camel-toe? It wasn’t so I could listen to your thesis on sexual protocol in medieval Cimmeria.

This CONAN goes where Arnold’s 1982 CONAN feared to tread: all the slavegirls, whores and serving wenches are deliriously bare-breasted – and they’re all white women with implants – just the way I likes ’em! Who knew the ancient Cimmerians had the recipe for silicone titties?

The swordfighting choreography is admittedly excellent – a bloodthirsty, brutal spectacle of creative killings – and the bestial style of Conan does not go unnoticed. Not as “classically” fluid as the sword and sorcery idiom usually portrays, his savagely primitive style is going to get a lot of teenage boys’ eyes poked out trying to emulate him.

CONAN comports itself well for what it is; definitely the high adventure end of the shallow sword and sorcery set. No underlying themes, no extraneous characters, no plot twists, just beautiful abs and beautiful tits. And buckets of blood. And Stephen Lang the warlock traveling around on a boat carried on the backs of eight elephants. Great gods amighty! I know that if I was king of the world, that would be my weekend car.