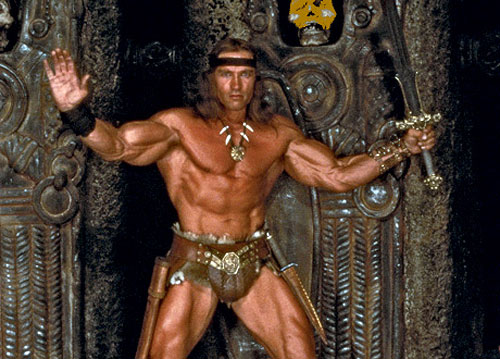 Save a Barbaric Yawp for me.

CONAN THE BARBARIAN opens with a Nietzsche title card: “That which does not kill us makes us stronger.” Oh, so it’s a focus on the philosophical struggle of mankind. Well, actually it’s more a focus on the “kill” and “stronger” bits.

For an action-adventure fantasy epic, CONAN THE BARBARIAN sure is painfully slow, padded to the trapezius with trekking across deserts, religious cult rites, faux-philosophy around campfires and Arnold posing. And when the action does come, the fight choreography is almost as exciting as the old guys who pretend to be knights at a Renaissance Festival. And killing that giant snake was as exciting as watching a bodybuilder wrestle a puppet.

Arnold Schwarzenegger, muscles thrumming from his recent 7th Mr. Olympia title (1980), is perfectly cast as author Robert E. Howard‘s medieval warrior, Conan the Barbarian. This movie’s demographic are probably more familiar with Conan from his appearance in Marvel Comics from 1970. Or maybe you’ve just seen the Frank Frazetta artwork. Whatever we might say about John Milius directing like he was busy doing something more interesting, or writer Oliver Stone mashing five somewhat boring stories together to make one altogether boring story, we can say this about Schwarzenegger – here was a stone-bodied man-mountain superhero that looked exactly like Frazetta’s paintings!

After a weird-hairstyled barbarian named Thulsa Doom (James Earl Jones) kills his parents and torches his village, boy Conan is put to work pushing one of those giant wheels, whereupon after 20 years he develops not only massive pectorals, triceps, deltoids and calves, but also all those other muscles he would realistically never use, to the point of being so perfectly proportioned he could win a Mr. Olympia title if he just had a good agent. 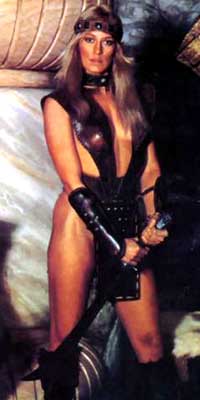 A costume designed to make us look at where it’s not.

Dogged by a soundtrack that sounds like Russian national anthems falling on your head, Conan allies with a Spanish archer (Ben Davidson), a “wizard” (Mako) and a self-proclaimed “Queen of Thieves” (rugged blond Sandahl Bergman as Valeria, who also looks like Frazetta fare) to seek revenge on Thulsa.

CONAN is a seminal movie (hugely due to Schwarzenegger’s presence) that started a trend of Sword and Sorcery cinema, and probably worked more towards keeping teenage boys virgins with Live Action Role Playing groups (LARPers) than any movie before or since. Ironic, considering every hot chick in the movie is attired in that revealing hanging-bikini top and a robe or leather skort with peek-a-boo slits way up past her thighs.

Max von Sydow is a tragic king whose daughter has run off with Thulsa, so mercs out Conan to bring her back. Since Conan is headed there anyway for vengeance an’ all, we forget this subplot as soon as von Sydow finishes his cameo. We are suddenly reminded of it when we see his daughter in one of those slit skirts and bikini tops…

Thusly, Sword and Sorcery ensues, in between the aforementioned trekking, rites, faux-philosophy and posing.

Square-jawed Arnold keeps the chatter to a minimum, for even though his physical presence easily dominated the film’s focus, in his first starring role and (technically) second feature film, the filmmakers had just cause to doubt his prowess at line delivery – even though his unpolished English and Teutonic accent could have been attributed to his being a “barbarian” from the fictional land of Cimmeria… Hey, maybe he’s speaking authentic Cimmerian!…

After almost dying of boredom watching this film, I realized Nietzsche’s quote is true: I really do feel stronger.