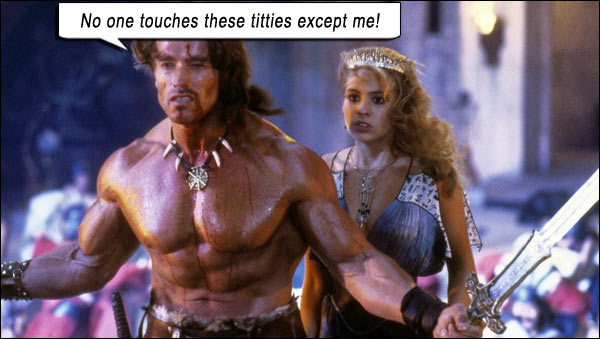 Adventure on Steroids (i.e. too musclebound to move).

CONAN THE DESTROYER slowly follows Conan the Barbarian (Arnold Schwarzenegger, still learning how to speak with his mouth), empowered by Queen Taramis (Sarah Douglas) to accompany a virgin princess (Olivia d’Abo, too spinner-sexy for words, which is probably why Arnold can’t speak) and her bodyguard (Wilt Chamberlain, still learning how to act) on a slow quest to retrieve a magic crystal and a magic horn. Slowly.

In this sequel to 1982’s CONAN THE BARBARIAN, Conan and his slow thief buddy Malak (Tracey Walter, who is supposedly the comic relief, even though we’re laughing at EVERYONE) slowly gather up their useless wizard pal (Mako) along the way, and are joined by a fierce warrior who has the most testosterone in the group, Grace Jones. In her scanty leather bindings, she is a horrific sight, and after casting my gaze a moment too long upon her explosive ugliness, I almost swore off women, until I remembered she was a man.

Conan fights monsters slowly, armed guards, even slower, and when he gets drunk, moans about Valeria (whose groin-slits he infiltrated in the last movie). 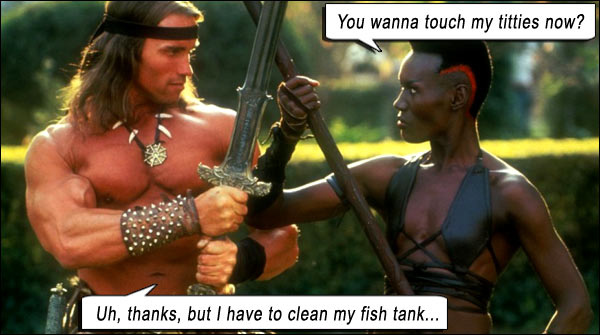 Richard Fleischer (TORA TORA TORA, SOYLENT GREEN) directs this sludge trying to find a slope to run downhill. He is a great director, but of another age. Truly, this movie and its sequel, RED SONJA, were both directed toward the end of his illustrious career. He somehow could not find a groove in this slit-skirt sword-muscle hokey-mask wizard-titty extravaganza.

Most of the “action sequences” involve people standing around or walking through strange places with their swords drawn and concerned looks on their faces; sometimes the action sequences would involve stone doors rising or lowering slowly; the special effects are ludicrous, with lots of sparks to distract from the cheapness, and the swordfights are choreographed by Craig from the third grade. Magic plays a big part in the quest, so – fuck everyone. Why bother with a plot? Anything can and does happen. By the time Conan is double-crossed and avoiding getting skewered by a guy wearing a rhino suit, it’s time to get drunk and moan about Valeria’s groin-slits.