Paradise by the Jump-Scare Light.

If this movie didn’t have jump-scares, it wouldn’t have any scares at all.

Clichéd Haunted Houses Monthly awarded THE CONJURING its highest honor: “Best Movie With A Middle-American Family Moving Into An Obvious Haunted House Where Murders Were Committed.” The movie was also given a plaque by the Organization For Jump-Scares And Orchestra Stabs, with a special write-up and Behind The Scenes link on the website www.MoviesThatRipoff-THE-EXORCIST-Blatantly.com.

I think my job here is done…

Patrick Wilson and Vera Farmiga star as Ed and Lorraine Warren, paranormal investigators (meaning they don’t have a real job), who must conduct an exorcism (meaning ‘read Latin and gesticulate’) for a family where a demon has possessed the mother and is trying to kill her daughter (meaning mom’s having a nervous breakdown and blaming ghosts again).

The most tragic aspect of this supposedly true 1971 horror story is that Ed and Lorraine Warren really do exist. They’ve been on the con since at least 1952, with the founding of their New England Society for Psychic Research, driving out intangible entities for some very tangible cash. Movie opens with one of their high profile cases – that of Annabelle, a doll which terrorized a family until Ed and Lorraine trapped it in a glass case of emotion. (I guess demons have a hard time navigating through glass.) This first sequence pummels us with classic primal terrors, like hearing banging on a locked door, opening it and seeing nothing but a lifeless doll outside. This whole sequence is unrelated to the story proper, serving to introduce Ed’s and Lorraine’s talents on their lecture tour.

Then we meet Ron Livingston and Lili Taylor as Roger and Carolyn Perron, who move into a capacious country house with their five daughters, the youngest channeling Drew Barrymore lispily. Out comes the Hollywood Haunted House Handbook and writers Chad Hayes and Carey W. Hayes proceed to con the viewer into thinking this movie is original and real, as the Warrens conned the populace into thinking their “powers” were original and real. 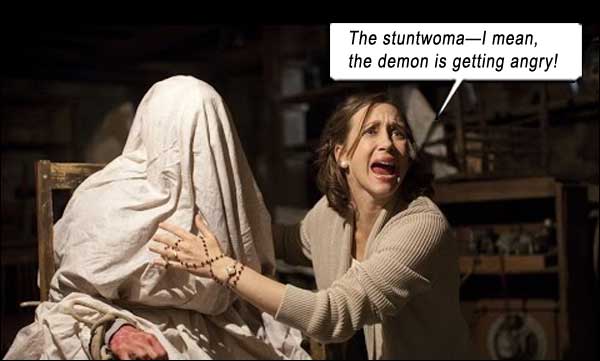 James Wan, a very talented writer and director, helms the project with a sure hand, but achieves nothing noteworthy, constructing situations and scares by the numbers: house extremely cold, all clocks stopping at 3:07 a.m., horrible smells, doors slamming, little kid talking to imaginary friend, music box, hidden basement, rocking chair, hanging tree, legs being pulled while sleeping, infrared photos, voices on tapes, sleepwalking, disfigured spirits… the list goes on and on, hitting every single horror movie trope, in a quest to out-cliché them all!

In the final scenes, when Carolyn is fully possessed, with everyone screaming to hold her down, while Ed is screaming in Latin at her, movie has derailed completely. We wonder why Carolyn is tied to a chair with a sheet over her, but soon realize why, as she is levitated all over the place and thrown bodily across the room – oh right, Lili Taylor didn’t want to do these stunts, and it was too hard to disguise the stuntperson, so they just covered the stuntperson with a sheet. Awesome solution, James. The screaming in Latin continues.

Suddenly, the Warrens’ little girl is under threat. Ed and Lorraine’s daughter, a minor character, far removed from the main action, being watched by granny over at the Warrens’ house, is being tempted into their “Museum” of evil artifacts, where Annabelle the doll is trying to navigate past her glass case of emotion. Is this the same entity possessing Carolyn, or is it Annabelle? But I thought Annabelle had no more influence over anyone from behind that glass? Who knows? All that happens is, it diverts our attention from the main story, and loses our emotional involvement. Why did Wan set up two climaxes like this? Well, remember this movie is some sort of love letter to the Warrens, so it sought to make the entity feel threatened by them, so it terrorized their daughter as a distraction to the exorcism. (Did the entity get a peek at Ed’s address in his wallet, or has it been following Ed for awhile now?)

There’s a tragic backstory to the house and its inhabitants, involving sacrificing babies and suicide-hanging at the tree, but it all leads to the same jump-scares, so should we award any points? 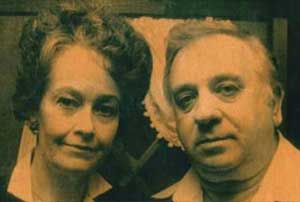 “Psychics” Ed and Lorraine Warren are the real evil here.

This movie might have been a mediocre date-night horror diversion, but the fact the filmmakers are selling it as the “true story of the Warrens” is infuriating, since they are charlatans who have built an empire of nothingness on the backs of the  gullible. The movie itself becomes a tribute to two con artists!

“Investigating” over 10,000 cases, if only the Warrens had integrity like Harry Houdini or James Randi, and used their knowledge of charlatanism to explain supposedly supernatural phenomena and/or debunk supposed hauntings. Instead, they bilked traumatized people out of money, and both went to their graves (Ed in 2006, Lorraine in 2019) maintaining their avocation was real. However, their deaths proved conclusively – and ironically – that they lacked all credibility in life.

Think about it: for two people who knew ALL the incantations and demon-names and rituals and rules of the after-life dimension, they never found a way back themselves!

imdb
Word Count: 900      No. 1,460
Lorraine Warren has kept the con going for 50 years! No need to stop now. Her customers? Everyone watching this video with the hairs rising on their stupid arms.