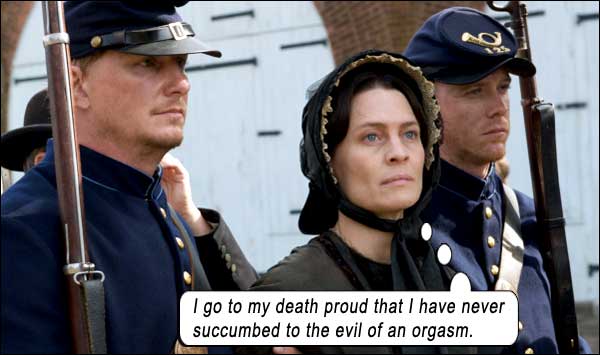 The SYSTEM is the conspiracy!

If you were wondering why director Robert Redford would re-litigate Abraham Lincoln’s assassination on film (how many times can they sink the Titanic, right?), then defer to Redford’s rationale: “It’s a story that no one knows about, connected to a story that everybody knows about.”

THE CONSPIRATOR recounts the tale of Mary Surrat (Robin Wright), the lone female amongst a cadre of men, accused of conspiring in President Lincoln’s assassination. The government wants a scapegoat, the public wants a hanging, and the slanted military tribunal declares her guilty, the “trial” just a formality. Only a young, idealistic lawyer (James McAvoy) clings to the American constitution to try her fairly, against the machinations of the lawless mob (aka, the court itself, made up of – you guessed it – angry white guys; did we expect anything more from a gaggle of Republicans?). 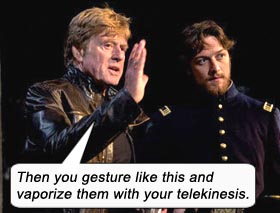 Masterful director Redford (with writers James Solomon and Gregory Bernstein) actually pulls together a multitude of post-assassination details that make THE CONSPIRATOR a compelling courtroom drama. It starts with visualizing how soldiers must have slogged through packed, panicked streets, carrying Lincoln’s body immediately after being shot in the Ford Theater by John Wilkes Booth; details like the conspirators initially wanting to kidnap Lincoln and hold him for ransom; details like the politics behind Mary Surrat being held with no evidence and slated for hanging, overlorded by a sadistic Secretary of State, Edwin Stanton (Kevin Kline, unrecognizable in makeup and manner) who shared the same swinish ancestral blood as Dick Cheney.

McAvoy brings his big, honest, pretty pretty eyes as Fred Aiken, an ex-soldier who is outraged that the Constitution he has fought to uphold is being so prejudicially compromised by the very courts that should be adhering to it, telling them that this case – where minds are made unclear due to public opinion – should be the exact instance where constitutional procedure should be upheld, rather than discarded. It’s like talking to a brick wall. Or Dick Cheney. The prosecuting attorney (Danny Huston) tells him later, almost as an excuse for the court’s petulant boneheadedness, “In times of war, the law falls silent.”

And that’s why THE CONSPIRATOR resonates through the ages. This film has exposed a recurring theme in American judicial history: the courts decide only what the people with the most political power want. Like the Nuremburg trials, like the Rodney King beating trials, like the Bush administration kidnapping and torturing whomever they wanted, like the Obama administration letting torturers go unpunished…

Kevin Kline’s Stanton is the political powerdog here, single-minded on revenge for Lincoln, not justice. (Kline asked Redford about Stanton, “He’s a pretty heavy guy. Are we talking Cheney?” Hah! The former VP has become a trope for unreasoning sadistic assholes!) It makes us think about the architect of the Kennedy post-assassination meme: someone in political power deemed there would be a single scapegoat to represent the conspiracy behind that presidential shooting. This movie comes 150 years after Lincoln’s death, able to declare previously little-known facts without vilification, retribution or political upheaval. Will it take another century before the facts behind Kennedy’s assassination are revealed? Another century after that for the facts behind “9-11”?

Aiken, like the American population at the time, comes into the case believing the furious meme that Mary Surrat is as guilty as all the other conspirators who roomed at her boarding house (which included Booth and her son John, the only two suspects who escaped being rounded up). It becomes apparent to Aiken that there are more nuances to this case than meets the eye (and that the blinkered military tribunal would rather pay off witnesses to spout indictments, than dig for the truth), and he is outraged to his pretty-eyed soul that the men representing justice are more fanatical, bloodthirsty and conspiratorial than the conspirators they are sending up the river; subverting justice in order to enact what they alone deemed justice.

Evan Rachel Wood is Mary’s daughter, Colm Meaney is the blinkered judge, and Justin Long is improbably cast as a soldier friend of Aiken, faking a British accent almost as abominable as Don Cheadle’s in OCEAN’S ELEVEN.

Mary Surrat was the first woman in history to be hung. Not counting Chaz Bono.

Fred Aiken would leave his law practice and become the first city editor of the newly-formed Washington Post. Trace a direct line to Woodward and Bernstein taking down Nixon. Fine pedigree.

Redford succeeds in telling us something new about something old. Nicolas Cage wept.