Just another day in Hollywood…

This movie was better when it was called THE MATRIX.

Traversing between two parallel dimensions, Neo – I mean, John Constantine (Keanu Reeves, kickin’ it arctic cool, by way of Eastwood’s Stranger, Mickey Rourke, and Ren & Stimpy) is some kind of secular exorcist, a border patrol for illegal demons trying to cross over into our dimension. Since there are already enough evil acolytes walking the earth – they’re called priests – Constantine routes these aliens with extreme prejudice, utilizing rules and laws that have no basis in any mythology, let alone as apocryphal arcana, that morph at the whim of the watery, unfathomable plot.

That’s the problem with movies of this ilk. No rules. (Or characters desperately mouthing expository “rules” just before a scene which would have been just as illogical with or without the exposition.) The definition of “inconstant” is “likely to change frequently without apparent or cogent reason.” Thus does this visually elegant photoplay shoot itself in the foot. 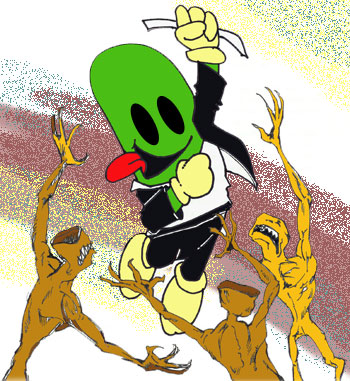 But then, how can it be expected to adhere to rules when its source material is more contradictory and confused than a whore crying rape – the Bible? Simultaneously exhorting us to love our enemies, then enjoining Joshua “to destroy all that breathes as the Lord God of Israel commanded” (Joshua 10:40); a world-renowned book that teaches that the sun moves around the earth; that dead humans can be reanimated; that unscrewed virgins can give birth; to turn the other cheek, but to take an eye for an eye; that advocates human sacrifice as some kind of palliative to an imaginary burden of sin; a tome that, through its cold-blooded murders, incest, executions, lies and debauchery cannot but help engender a belief in evil.

The writers of the Hellblazer comic book (Jamie Delano and Garth Ennis), that this movie draws from, cannot be wholly blamed for CONSTANTINE’s befuddlement, as screenwriters Kevin Brodbin and Frank A. Cappello consolidated this tale from many Hellblazer episodes.

The first demon we encounter enables a young girl to walk up walls. In the next scene, she is tied to a bed, where Constantine exorcises the demon into a mirror and smashes it, thereby killing the demon. The inconsistencies pile up immediately: if the demon-girl can walk on walls, why not scurry down the outside wall of the building and lose herself in crowds before six men with ropes were called? And if you’re going to possess someone, why possess an underprivileged girl from a minority community? Why not a person whom the authorities would find financially impossible or ethically uncomfortable to restrain – like Donald Trump or Tom Hanks? (Some might say Trump is already in league with demons, what with his overwhelming greed and narcissism; some may say Hanks has also lost to evil, what with THE TERMINAL.) And maybe my mythology is rusty, but I believe the clause that covers disposal of demons via mirrors is right next to the one about “Let he who is without an expressionless movie hero cast the first stoner.”

In what could only be construed as bone-laziness on the demons’ part, why do these poltergeists, who have illimitable power over seemingly everything – the elements, animals, machinery – always allow characters to live just long enough to give out information that enables the hero to destroy them, rather than just killing the stoolie character immediately?

Not only does Beeman (Max Baker) get belatedly killed after giving out crucial info to Constantine (after this movie’s “power of Christ compels you!” scene), Constantine’s eager assistant, Chaz (Shia LeBeouf, whose ancestral family tree surely intersects with Josh Charles’s branches) also meets a belated end after chanting the Right Words and ruining a demon’s possession. Why not kill him BEFORE he starts chanting, Einstein-zebub? If Hanks was this inefficient, he’d be flipping burgers.

After THE MATRIX made him a superstar in this unique mold – the last counter-intuitive casting that worked so well being Michael Keaton as Batman – Reeves need tread no new ground to be accepted as Inter-Dimensional Tough Guy. His authoritative performance here might have wiped away the last stains of Theodore Logan Esq. had he not resorted to calling demons “assholes” and flipping them the bird. (Really, how offensive could an insult like this be to a para-dimensional entity that doesn’t have bowels?)

CONSTANTINE’s brouhaha revolves around the Spear of Destiny – a totally fictitious ornament (mentioned in passing only by John 19:34, and even then, not giving the lance or its holder a name – such details added millennia later) which has somehow gained credence in the catholic vernacular as the “spear that killed Christ.” And whomsoever “holds the Spear of Destiny holds the fate of the world in his hands.” Reportedly in Hitler’s possession at one time, I suppose that accounts for his domination of Western Europe. So what happened in May 1945? He woke up one day and misplaced it?

This Spear is instrumental in birthing the son of the devil – in some contrived plot also found nowhere in any Christian mythologies or apocrypha – where a transgendered angel Gabriel (Tilda Swinton, garbed like one of those insufferable female singer-songwriters who populated the 90s Los Angeles poetry slam scene) betrays god to help the devil’s son for a motivation unknown to anyone but the confused screenwriters.

And Yea, an angel of the Lord shall bring Good News about fashionable slacks.

Constantine uncovers this plot by sitting in a chair of special effects straight out of the bible. (Remember that psychic chair that Jesus sat in that one time?) This chair is apparently so dangerous that its owner, Midnite (Djimon Hounsou, dutifully cast as the African witch-doctor stereotype) constantly disallows its use by Constantine. When Constantine eventually uses it and his life is threatened, to escape, he need only call out to Midnite, who wrenches him bodily from the chair. Uh, guess it wasn’t that dangerous after all.

(How the chair works is anyone’s guess, as Constantine doesn’t punch in any instructions, nor does he “will” it to reveal anything to him. Why it doesn’t show him his last laundry day or an episode of those karaoke douchebags on AMERICAN IDOL is a testament to its lack of danger.)

Enter Rachel Weisz, as cop Angela Dodson. Her twin sister, Isabel, just committed suicide and is walking through hell in her nightie. As a cop – a person trained to only accept evidence – Angela approaches Constantine with unquestioning, juvenile belief in his “gift” of dimensional travel, beseeching him to find her sister and bring a wrap.

Constantine promptly breaches hell by putting his feet in water and staring at a cat. Whilst in hell – which looks like a cross between a Heironymous Bosch painting and Downtown Los Angeles at 2:30 a.m. – Isabel commits suicide by falling off a building (after she kills herself, where does she go then?) whilst Constantine and some half-headed monsters cluster together like N’Sync for a dynamic photo op. 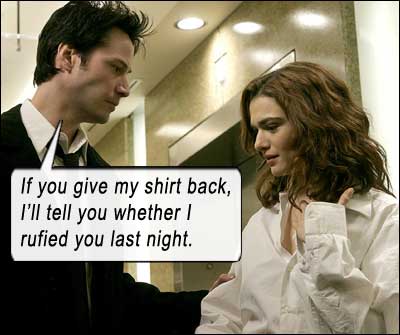 Constantine brings back Isabel’s hospital tag as “evidence.” Rachel asks, “How could this be?” Well, there’s this thing called a POCKET which could very easily have hidden that tag until Constantine needed to whip it out and impress your small mind.

What would any dumb American film be without the British Bad Guy? Gavin Rossdale (from Bush – the band, not the criminal public official) plays Balthazar, a smarmy Bond Villain type who meanders about for no reason, who can’t be killed by heavy artillery, but cowers under the mighty incantations of Keanu’s stoner spells. He ends up as tiny pieces of face that can still talk – without the aid of lungs, lips, voicebox or tongue. He seems discomfited when an unseen entity scatters him even further – although if he can talk when he is made up of such tiny pieces (against any kind of natural laws), why can’t he still function as even tinier pieces?

A thousand transgressions of non-rules later, we arrive at the movie’s conclusion, laden with effects in lieu of excitement, logic and interest, where Constantine slashes his wrists to “die,” precipitating the appearance of Satan (Peter Stormare, clad in angelic white, chewing more scenery than Heston on Sinai), whereby Constantine can then narc on Gabriel in the next room who is using the Spear to bring forth Satan’s son. Exactly like in the Bible.

Let me get this straight: Satan, omniscient bringer of darkness, doesn’t know what is going on in the next room?

Directed by Music Video Director to the Sluts, Francis Lawrence (Britney, Janet, J-Lo), the roaring beauty of this movie is tempered by its dangerous stupidities. If audiences could appreciate it as simply an imaginative story (albeit contradictory and idiotic beyond belief), the human race might just survive. Unfortunately, ninety percent of audiences will take it as fact, to be added to their human-penned gospels and already insane mythologies of Christ and hobbits and Islam and space aliens. And as these gullible dupes become the decision-makers in society, billions more murders will be perpetrated for this “sacred truth” in a never-ending spiral of ignorance.