This movie scared the pants off me. Which in turn, scared young children and women with small hips, as I walked out of the theater, pantless.

I must be dreaming
Please stop screaming 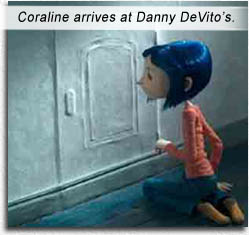 With CORALINE, the MPAA once again proves how little grasp it has in correlating asinine Ratings to actual content. Even as I entered this PG-13 “3D stop-motion” animated movie, there were lines around the block for the premier of the R-Rated FRIDAY THE 13TH, yet I cannot imagine how axe-killing teens could be more chilling than a parallel world where people have sewed-on buttons for eyes!

From a celebrated book by Neil Gaiman, director Henry Selick (director, THE NIGHTMARE BEFORE CHRISTMAS) brings us this morbid tale of a cute little blue-haired girl who goes “through the looking glass” (actually, she crawls through a small door in the wall) to a mirror world where her parents do not ignore her (like her real writer parents who are always hunched over computers), feed her delicious dinners (instead of glop), and lavish love on her (instead of what seems like barely tolerable babysitting). Everything is the same but opposite in this Other World – except her Other Mother and Other Father have buttons sewed on in place of eyes.

That in itself is something out of a medieval torture tale. But it gets worse. Much worse. And by worse, I mean better.

Coraline, the wide-faced, blue-haired girl, is voiced by Dakota Fanning, her parents, voiced by Teri Hatcher and “the PC Guy,” John Hodgman. They’ve moved to a townhouse complex in the desolate country, where the neighbors define wacky (probably because they’re so isolated in the first place); Jennifer Saunders and Dawn French (ABSOLUTELY FABULOUS, dahling!) voice two frumpy old actresses with cute Corgis smoothly gliding about on feet covered by their long fur (their dead Corgis are stuffed on a shelf, dressed in angel wings); Ian McShane voices a stick-thin old circus performer with a beachball belly who rears performing mice. And Coraline meets a local boy with a terribly insecure stoop, Wyborn (Robert Bailey Jr.), whom she starts taunting darkly with her nickname, “Why-Were-You-Born.”

Coraline finds a doll in her new house that looks like her, except with buttons for eyes. She calls it Little Me, and its secret is revealed soon enough when Coraline discovers her eerie utopian mirror family.

There are fantastical musical numbers in this Other World, an especially stunning piano interlude by Other Father (performed by John Linnell of They Might Be Giants).

The ultimate “crossing over” for Coraline would be to let her Other Mother sew buttons in place of her eyes!…

CORALINE is not for little kids. Unless we ourselves have foisted on them so much vanilla for so long that we don’t realize kids are actually intelligent enough to handle terrifying visions like a piano with hands holding a man’s mouth shut to stop him from revealing secrets, a ringmaster’s suit being animated by hostile rats from within, despairing ghost children trapped behind a mirror with missing eyes…

The dark marvels come at us unrelenting, one amazing spectacle after another; it’s not even “darkly funny” – it’s just freakin’ DARK.

This movie is apparently the first to be made with this new 3D Stop-Motion process. It is astounding to look at. This is not your LITTLE DRUMMER BOY stop-motion (1968, Rankin-Bass), or even Nick Park’s exemplary WALLACE AND GROMIT (1989) – although an honorary mention must go to the man who made stop-motion an art form, Ray Harryhausen – CORALINE is smooth enough to be a 3D cartoon, yet retains that suggestion of jerkiness that lends it an organic feel. The use of lighting is amazing: shadows moving across a field as if clouds are passing in front of the sun, use of darkness and fog and three-dimensional background turning two-dimensional.

We’ve been subjected to the advertising for so long that we imagine it’s “Tim Burton’s” THE NIGHTMARE BEFORE CHRISTMAS, but now we see the darkness might not have been all Burton’s; it was Selick all along who brought the darkness to the celluloid that Tim Burton expressed on the written page.

The parallels with Alice In Wonderland and Through The Looking Glass are many: the talking cat, people trapped in mirrors and snow globes; the crazy characters having tea, a wicked matriarch, a grin sewn onto a boy’s face… even the clever trick of Coraline’s name (reverse two letters, it is “Caroline”)…

But it’s the parallels with Alice Cooper that are the reason why I need to go back through the looking glass to find my pants.

The Other Father Song • John Linell (They Might Be Giants)