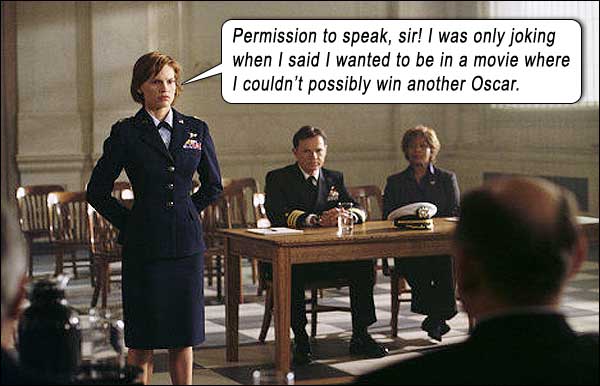 I want to hurt this movie. Like it hurt me.

THE CORE opens with a Peter Gallagher clone sans Eyebrows dropping dead at a board meeting – so begins a series of events that establish the Earth’s core has inexplicably stopped spinning, causing electromagnetic anomalies. So scientists must drill down and re-start the spin with The Universal Solvent – nukes.

But the spin begins long before they take the plunge…

Any rationalizing fools who entreat those of us with a modicum of intelligence to “sit back, relax and enjoy this entertainment” do not realize that we who rail against movies of this ilk, do so not because of bogus science per se, but because of the inconsistent bogus science. We may not boast Geophysics degrees, nor do we aspire to atom-splitting scientific accuracy – we just want consistency!

Example 1: If your movie maintains that pigeons use the Earth’s electromagnetic field for “long-distance navigation,” why show pigeons disoriented whilst tooling around the few hundred feet of Trafalgar Square.

Example 2: If your movie cites Real Science to explain the impossibility of generating enough energy to start the planet’s core re-spinning, why not establish that it takes that same impossible amount of energy to stop the core in the first place? More on this later.

This movie has less “science” in it than STAR WARS – and STAR WARS has NO science in it.

At a militia symposium, geophysicist Josh Keyes (Aaron Eckhart, playing your average “biscuit-thrower” college professor: disheveled hair, attire and lifestyle; upon arriving home, throws biscuit to dog which has no name – Hollywood stereotype created by Mel Gibson in LETHAL WEAPON), cites Physics 101, yet none of the generals seem to have even a sixth-grade education, as they stare dismayed at his demo of burning a peach with a spraycan, to illustrate – get this! – how the Sun would burn Earth were it to lose its electromagnetic covering. The stupidity meter could go no lower at that point.

Movies of this ilk are constructed around one or two thrilling sequences upon which the burden of the storyline is draped uncomfortably – such a scene was the introduction to Major Rebecca Childs (grotesquely gorgeous Hilary Swank) as her crew emergency-land Shuttle Endeavour in the LA Aqueduct. The movie’s pitch was all about sonic-booming over Dodger Stadium and navigating through overpass bridges like technofied T-Birds from GREASE. Magnificently-staged, the thrill meter hit climax – consequently, it was all downhill from there.

Tchéky Karyo, as Frenchman Serge, is the only likable character. Of the admittedly talented cast, his performance alone is so poignant that we’re truly saddened to see him die. (His end was pre-ordained; he was, after all, French.) In the grandest of hackneyed traditions, only the Attractive American White Couple survive whilst every one of the dubiously-titled “terranauts” onboard the drilling craft goes down.

Gorgeously grotesque D.J. Qualls is computer-hacker, Rat, called in by the gubmint to communicate with the drilling craft from the surface; an “unlikely hero” character who is really one of those rootless, amoral beings who make our online lives unbearable with viruses and identity theft and their wholly unnecessary existence – rather than being put on a pedestal, these people should be dumped down a deep crevasse.

There’s the Square-Jawed American Pilot (least-known of the principals, Bruce Greenwood – ergo, first to die); Delroy Lindo as Token Black Dude, Dr. “Braz”; Richard Jenkins (from SIX FEET UNDER – is that some kind of bad joke worse than the puns I’ve been making?) and Alfre Woodard as the preposterously miscast Flight Director. The actors did their best, but the blathering catastrophe of the script kept them low. In a movie this bad, one suspects that either Karyo or Tucci filled a role that F. Murray Abraham was too busy to fill because he was too busy digging himself into a hole on some other bad movie.

Braz constructs their drilling craft with a substance called Unobtainium (stop that laughing in back!), which, he tells us, converts heat and pressure to energy, so the deeper it gets, the stronger it gets….er, I think the misinformed “scientist” meant to say that energy in the form of heat and pressure is converted to mass by the Unobtainium. (Remember that “E=mc2” thingy?) Was the “science consultant” on this movie an actual scientist or a guy that read too many comicbooks? – and, more importantly, may I book some time to put him six feet under?

The script was made of Unobtainium. The deeper it got, the more energy it expended in keeping us from frying in outrage.

Note that “implausible” = fiction; “impossible” = fantasy. A drilling craft outfitted with a laser that disintegrates solid rock to nothingness: implausible. Humans sustaining diamond-crushing pressure in the Earth’s mantle – no matter what they’re wearing, let alone wafer-thin spacesuits: impossible. Throughout the film, Impossibility outweighing Implausibility makes THE CORE Science Fantasy, not Science “Fiction,” so cease associating it with a once-legitimate term.

When physics knowledge was at a groundling stage, scientifically-inept tales like JOURNEY TO THE CENTER OF THE EARTH were acceptable, but these days, even the common rabble are well-versed in general physics, so it is inexcusable that knowledge be so denigrated, ignored and subjugated to the inadequacies of feeble-minded technicians with big budgets, who promulgate ANTI-knowledge with their idiotic product…

Deep in the plot, where everyone takes turns saying something scientifically illiterate, Zimsky reveals that a man-made device, “Destiny,” is responsible for the stalled core. I’ll say this once: nothing man-made can output the amount of energy needed to stall a planet’s core. What part of “nothing man-made” don’t the film-makers understand? If these arrogant, anthropocentric, bacterial mites were to explode every nuclear weapon the government denies possessing, it would still not affect the planet’s spin, orbit or sturdiness; it would not even wipe out “all life,” but the great percentage of larger organisms that depend on photosynthesis in their food chain (mainly plants and mammals).

Conceited humans refuse to acknowledge One True Fact: the PLANET will be fine – whether or not the core spins at all; whether or not humans exist at all. You’re only “saving” it for your own selfish ends…

As the Attractive American White Couple are rescued, Rat cries, “The earth is healing itself!” – Well, uh, it was never really “sick,” rodent – obviously jubilant that he can now stop working for The Man and go back to creating viruses and stealing identities online, like the worthless piece of excrement he always was.

But before he hacks into the World Wide Web for spiritually bereft reasons, he does it one last time “nobly” – to promulgate the biographies of the “heroes” who died whilst defying physics laws through uninformed dialog. Whilst we vainly try to clear our e-mail logjams, that’s all we need – more spam.

Can I start to hurt you now, to let the real healing begin?