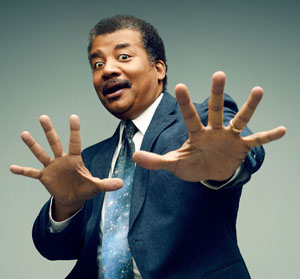 When Creationists corner Neil deGrasse Tyson, he uses his repulsor rays to fry their brains.

COSMOS: A SPACE-TIME ODYSSEY is an ambitious venture, treading in the footsteps of gods, attempting to explain Life, the Universe and Everything, while retaining a connectivity between the farthest galaxy, the smallest microbe, and you and I.

The opening montage says it all, with its morphing images of a chasm into an eye, a spiral galaxy into a shell, a dandelion into the Voyager spacecraft, illustrating the interconnectedness of all things. Because the Cosmos IS everything. And everything is the Cosmos. As Carl Sagan, host of the original dambusting 1980 COSMOS once said, “We are a way for the Cosmos to know itself.” Profound, poetic and true. COSMOS 2014 has a lot to live up to. And it lives up to… some.

Throughout the documentary series COSMOS: A SPACE-TIME ODYSSEY, we find some remarkable scientific revelations and information, augmented by excellent CGI and host/narrator Neil deGrasse Tyson’s personable velvety vocal (a fitting successor to Sagan’s rounded diphthongs). Yet the flow of knowledge is tempered by omissions that can sometimes be attributed to unnecessary esoterica, but more often due to time constraints because the documentarians would rather flex their CGI muscle than burden the lowbrows with relevant info. Even title cards would have been nice, as the peachy visuals swoop across our oversized flat screen TVs that we owe to the very science the doc is omitting. But no; the producers obviously doubt their audience’s capacity to read and be visually raped.

This is an ongoing gripe I have with the new COSMOS that I didn’t seem to notice with Carl Sagan’s version. It could be attributed to either me being younger and dumber, or the world in general being so. Consider: COSMOS 1980 did not have to contend with every science program that came after it, not least the excellent modern intellectualism of HYPERSPACE (hosted by Sam Neill, 2001), WONDERS OF THE SOLAR SYSTEM (hosted by Professor Brian Cox, 2010), or THROUGH THE WORMHOLE (hosted by Morgan Freeman, 2010). All these series and more have upped the sophistication of those who marvel at the cosmos around them. So in revisiting COSMOS more than three decades later – the granddaddy of this ilk – we are expecting to be blasted into nano-atoms with wonder. But I’m still in one piece. COSMOS will need to expend a googolplex more energy to compete with its contenders.

The question becomes not just “Can it?” but “Will it?” Maybe the makers of COSMOS 2014 – among them, executive producers Ann Druyan (Sagan’s widow), Seth MacFarlane (FAMILY GUY) and director Brannon Braga (STAR TREK writer) – would argue that COSMOS 2014 is merely an introduction to youngsters to get them interested in science. But this was only part of Sagan’s original intent – he composed COSMOS to appeal to youngsters and to also speak to intelligent adults.

So I’m not sure which demographic COSMOS is trying to appeal to. Sagan’s COSMOS was one of the most widely watched television series in the world, viewed by over half a billion people, because it came at a time when there was hardly anything like it, with such a powerhouse scientist at the helm. Now – these shows are a dime a dozen. Amidst a sea of video games, the internet, blockbuster “science fiction” movies, CGI graphics in car commercials better than movies of a decade ago, the Space Shuttle taken for granted, Japanese robots, 3D printers and cell phones that can do all of the above. It’s a lonely world for a turtleneck…

EPISODE 2. Some Of The Things That Molecules Do.

Neil deGrasse Tyson spends a good amount of time explaining evolution, touching on Darwin (and neglecting poor Alfred Russell Wallace), DNA (mentioning its acronym but not its full name, i.e. deoxyribonucleic acid) and telling us of the four bases that make it up (but not their names, i.e. guanine, adenine, thymine, cytosine, GATC). See how quickly I laid it out? And I’m no scientist; I know this just from being perceptive of everyday media. This is what I mean by the series neglecting information. They have the luxury of dressing up this info in title cards and images, while they simultaneously explain how it fits together. But they don’t. That’s a conscious choice – to avoid looking too didactic or elitist – and isn’t that playing right into the hands of the know-nothings, who would excoriate you if you start to seem too knowledgeable? 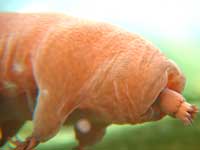 Extreme Life: The tardigrade (or water bear) – a microscopic animal that looks like a cross between an axolotl and a tumescent penis with eight legs – has shown capacity to survive in boiling water, below freezing, a decade without water, and in the vacuum of space. Since the Cambrian Period, the tardigrade has survived the five major extinctions. It is common belief the humble cockroach will survive any natural or man-made annihilation, but the actual prize will go to these icky eyeless squirmers with the mole-like claws and rose-petal dagger jaws.

Probable Life on Titan: now here was something new and cool. Most astronomers aim directly for Jupiter’s ice-moon Europa when discussing probable life elsewhere in the solar system, but we are shown the methane lakes of Saturn’s largest satellite, and taken below their oily depths to speculate… 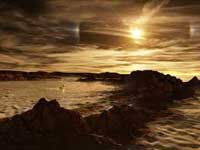 The title of this episode is a quote from Sagan. In the original COSMOS, after showing a thread of evolution, from one-celled organisms to fish, dinosaurs, birds, mankind, Sagan once again finds a way to put this gargantuan, inexplicable process into poetic perspective: “Those – are some of the things that molecules do, given four billion years of evolution…”

Before I started weeping over hearing Carl’s voice putting that button on this episode, it occurred to me that the visuals in the evolutionary thread have a real problem: they show mankind as the last item, unintentionally endorsing the Victorian elitism that Man is the pinnacle of Evolution’s frenzy. Sure, we are “a way for the Cosmos to know itself,” but we are nowhere near the most successful species by a long shot, if extant time on Earth is a criterion. To begin with, every dinosaur species has already proved itself more successful time-wise, as most insects are. And give a little sugar to the water bears!

Tyson and Druyan should have updated this admittedly excellent thread to incorporate varying perceptions of “success” as a species, rather than regurgitating the Victorian mindset for the know-nothings to bleat about their human superiority over Earth while wearing white hoods and thumping the bible.