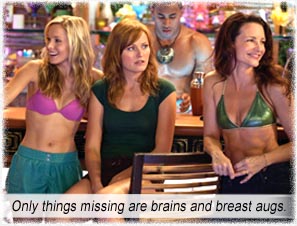 That’s the funniest laugh-out-loud line in COUPLES RETREAT, delivered by Jon Favreau when the cast arrive at their paradise resort – but it also describes the energy level of this dull excursion into the high maintenance of couplehood.

Though their getaway promises raging activities and paradisiacal locations, the brochure doesn’t mention that counseling is mandatory. So now we too have to sit through couples counseling (which could have been worthwhile, considering Ken Jeong and John Michael Higgins were two counselors, but whose funniest bits were all transferred to the Deleted Scenes). And even those couples who don’t need advice are driven further apart through miscommunication and counselor psychojargon. I’m sure the feeling of nothingness we ended up with after these sessions was not the filmmakers’ original intention.

Jean Reno is head guru, overqualified to be in this demeaning role, and Temuera Morrison is also sadly miscast here as a guy who simply bangs a gong – literally. Honorable mention to Carlos Ponce as a yoga instructor who gets away with dry humping the wide-thighed ladies in full ankle-behind-ear positions, with more suggestiveness than is usually allowed in PG-13 bore-fests. But I guess all the MPAA censors were asleep by now and didn’t even witness this scene. “Boom…”

Film loses us completely when the cast have to disrobe and these women who are reputedly 9s and 10s pretend with all their acting ability (which isn’t much) that they’re embarrassed for being “out of shape.” Shyeh royt! The selling point of this movie is the perfection of Malin Akerman’s and Kristen Bell’s flat bellies, from which every man in the audience fantasizes eating strawberries and licking the whipped cream off. Both of them supposedly have two kids each, yet not a vestigial stretchmark between them. Who are they kidding with the fake self-effacing? I don’t even get this scene: Why are any of these inshape people so shy about getting down to their bikinis on a goddam beach?! (Faizon is admittedly a fatty, but the gag is that he’s wearing no undies. Coincidence then, that at the exact point the filmmakers stoop to pulling down a fat man’s pants with an undesired angle on his cream-cheesed buttocks, the film gets lost up its own arse…)

When a perfect 9 tries to be funny about anything, the absolute last thing I’m thinking about is how well she’s delivering the joke. That’s the problem with COUPLES RETREAT – too many sexy chicks trying to deliver jokes – which is simultaneously the drawcard for its wanky audience. Men can innocently claim being dragged to this movie by their girlfriends and then have a nice tittygawk at the 8s, 9s and 10s that populate the female roles and extras in bikinis.

After nothing continues to happen past the point of us caring whether anything is ever going to happen, everyone reconciles with their spouses. The End.

Guys, don’t forget to laugh at the chicks trying to make jokes or you’ll never get away with all that tittygawking.