Yes, I know it’s trying to be inspiring and heroic and poignant, but COURAGE UNDER FIRE is one of the most blatantly gutless movies ever made. About a soldier investigating whether a downed female United States helicopter pilot in Desert Storm deserves a posthumous Medal of Honor. So I ask you: in which universe will America ever make a movie where a Medal of Honor is investigated and NOT awarded? 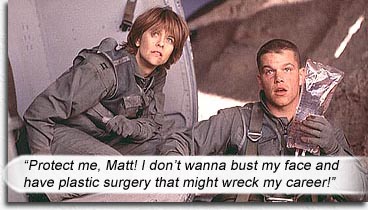 So it’s a foregone conclusion – all the mystery and mayhem and maybes are simply wasting our time more than the actual war this story was set in – as it leads inexorably to the melodramatic military funeral, the flags, saluting, tears of the family, proud shiny buttons and white gloves, the flyover with one plane breaking formation, and that bilious, bleating orchestra swell. And the Medal. The End. Cry me a river; cry me a patently meaningless award, military swine.

Denzel Washington is the investigating soldier, with demons of his own. (Well, they’re not really demons; they’re roiling stabs of conscience he feels for stupidly shooting one of his own tanks during a skirmish, killing his own men in the hilariously black euphemism “friendly fire,” and then having the military cover-up his blunder.) And whenever he has visions of that po’ boy he fricasseed in that tank (Mmm! Soldierboy, the other white meat!), he heads straight for the alcohol… uh, cos he’s a hero, see.

When he’s asked to investigate whether Captain Karen Walden (Meg Ryan) is worthy of receiving the Medal of Honor for “courage under fire,” the story ends right there. Of course she’s deserving of it. She’s the first female officer recommended, she’s regarded as a hero for sacrificing her life for her men–and she’s Meg Ryan. As if the movie would go to all the trouble setting up her heroism and feminism and Ryanism and NOT award her the medal.

And every cliché in the military lexicon is thrown at us like grenades lobbed into foxholes:

Denzel wants to find out “what really happened,” so COURAGE is constructed like a RASHOMON for rednecks, as we see all the alternate flashbacks with a coy Walden, an indecisive Walden and a butch Walden barking orders and trying not to look like a sex object. Not one of the scenarios is ambiguous about her Hero status — no matter if she threw Iraqi babies at walls or defunded the G.I. Bill. If we can call football players heroes, and people who jumped from the Twin Towers heroes, then this chopper pilot must be a shoo-in, so I ask again: what compels viewers to spend 120 minutes pretending there’s any doubt?

Denzel visits Walden’s helicopter bumboys, who all give differing accounts of My Night In The Desert With Captain Walden. Diamond Phillips claims he was the toughguy, as he lies and plies himself with alcohol and commits suicide (cos he’s a hero!); Damon claims Walden was a strategic hardnose, as he admits to being a junkie and afraid to go flying again (cos he’s a hero!); Guinee relates how Walden sacrificed herself for them, even as he reveals how she got them shot down by taking another pass at an Iraqi tank when she could have flown away–cognitive dissonance rules!–while constantly telling his wife to shutup for calling Walden butch (cos he’s a hero!); while Seth Gilliam pounds his medication to numb himself out of the running as a reputable eyewitness (cos he’s a hero, see!).

What’s in it for her bumboys to report that she was a coward? Nothing. But saying she was a HERO makes them vicarious heroes alongside her. Ooo-rah!

And here’s a note to all you military wardogs whose first reaction is to Spock-chop me for “disrespecting” you (such heroes, fighting for my right to have a differing opinion in a free country!): When are you going to realize your own government, who pays you hypocritical lip service, regards you with even less respect than I do? I just consider you deluded and egotistical and sometimes uneducated, while they consider you cannon fodder!

Is that what you bitches call “respect”?

Under fire from your own government, it’s about time you showed some real Courage Under Fire and tell them where to shove it next time they want to exploit you for political gain. That is, unless you really are as dumb as they consider you to be.