A shallow ripple in the Force.

Is COWBOYS AND ALIENS a boring western movie, or a clichéd alien invasion movie?

At some point, I wondered whether it was just a tax write-off for Stephen Spielberg, who seems to have phoned in his producer’s credit on this one. At least he hired Han Solo. 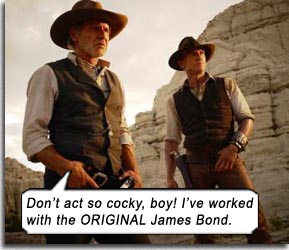 A cowboy (Daniel Craig) wakes in the desert with no memory and a futuristic bracelet attached to his wrist, which turns out to be a supercool weapon. A classic Eastwood-ian laconic avenger, this Stranger wanders into the nearest town, which is run by a mean-tempered rancher named Woodrow Dolarhyde (Harrison Ford playing nasty). As the Stranger is run into jail, a strange anorexic woman with catlike eyes, a nice ass and an ironing board chest (Olivia Wilde) skulks around him and makes portentous remarks.

Then aliens attack. Sounds dumb. Plays dumber. At one point, we almost wish that the movie would just remain a good old-fashioned Western, as the production values are top-notch, and fine actors like Sam Rockwell, Clancy Brown and Paul Dano are creating memorable, dirt-smeared roles. When mosquito-like extraterrestrial alien ships swoop down and start grabbing people and blowing things up, the tone is meant to shift to fun and action, instead shifting to stupid and eyestrain.

(Note that even though the Stranger has that snappy arm-weapon, Han Solo is the first person to start firing back at the aliens! “Give me a good blaster any day…”)

Dolarhyde (great name, huh?) and the Stranger team up to lead a posse to rescue the snatched townsfolk from the aliens, who have parked their big cigar-like spaceship in the desert and are mining gold.

Poffbacca: a cowboy AND an alien

Like INDEPENDENCE DAY or STAR WARS, the writers’ lack of imagination for the aliens’ battle tactics is astounding: the extraterrestrials have those fancy laser arm-weapons (one of which was stolen by the Stranger), yet when the cowboys attack their ship, what do they do? Run outside naked and start punching everyone.

There are two good aspects to this poorly thought-out art experiment. One is the CGI. Far be it from me to praise CGI as a defining factor of a movie’s quality, but I only mention the Computer Graphics as a comment on the state of the art; the CGI extraterrestrial aliens (which resemble the DISTRICT 9 aliens – no points for originality) are completely IN the movie. There is no doubt at all that we are looking at anything but rampaging extraterrestrial marauders that fully interact with people and horses and the landscape. On the other hand, they are purely used as ‘device’ – no characterization, no depth, just faceless, nameless things that the humans must overcome.

The other powerful aspect of this film is the emotional connection that gradually grows between Dolarhyde and the young Native American Nat (Adam Beach – watch that boy! Oscars in his future!). When Dolarhyde eventually realizes Nat is the surrogate son he wished he had, special effects have already killed him – and through our tears we realize why the great Harrison Ford was chosen as Dolarhyde. Not just for the wealth of Han Solo gags – only Ford could begin as an unsympathetic, cantankerous villain and arc to touching his long-buried heart with such tear-welling effect. Making us weep like Ewoks.

From the comicbook by Scott Mitchell Rosenberg and directed by Jon Favreau, with enough screenwriters to guarantee it was going to be a circle jerk, the mashup of genres in COWBOYS AND ALIENS is almost as dissonant as the same mashup involving aliens in INDIANA JONES AND THE KINGDOM OF THE CRYSTAL SKULL.

Apparently, the overwhelming number of INDIANA JONES fans leaving that movie weeping in outrage was not enough to deter Spielberg from trying to “alien”-ate us again…