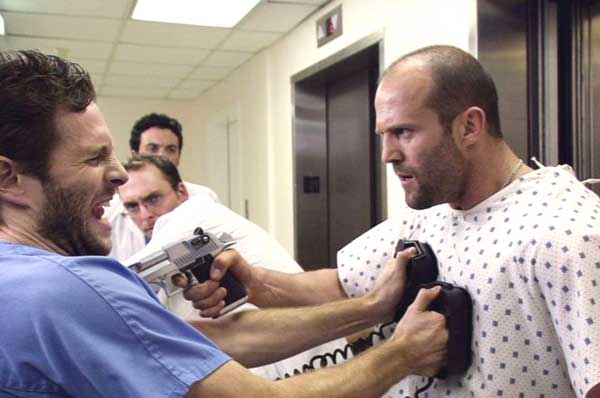 A hitman, Chev Chelios (Jason Statham), has been injected with The Beijing Cocktail, a substance that will kill him if his adrenaline slips below a certain level. To exact revenge on his killer in the 24 hours he has left to live, Chev must stay cranked to the point of his heart almost exploding. Think SPEED (1994), with Statham as the rampaging bus; think D.O.A. (1988, with Dennis Quaid and Meg Ryan) without the complications of a plot; stylistically, think a non-thinking man’s version of Guy Ritchie’s SNATCH (2001).

Statham as the doomed hitman (and the star of SNATCH) furthers the likeness to Ritchie’s frenetic film; the crash-cutting, insane angles and editing also conjures images of Neveldine and Taylor worshipping at the altar of Ritchie. But that is where the similarities end, for CRANK is a perfect example of what Ritchie was hollowly criticized for – style over substance. 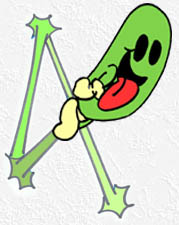 CRANK’s first ten minutes are so heart-bustingly fast and furious that we don’t have time to pay attention to plot contrivances, formulaic acting and slapdash direction. Of course, unless you are very talented – or very crazy (Guy Ritchie answers to both, first making SNATCH then marrying Madonna) – this kind of action is unsustainable, or the audience’s hearts would explode.

By the time Chev is headbanging to the strains of Achy Breaky Heart (you read that right), we have composed ourselves enough to realize that our suspension of disbelief is on rocky ground – as we think back on the logistical stupidities of what went into igniting this plot: a Latino thug, Verona (Jose Pablo Cantillo), who would as likely shoot you in the eye as gang-rape your mother, injects Chev with the offending heart-stopping substance and is kind enough to MAKE A DVD to explain the scenario to Chev. How very Batman-Villain of him.

Telling ourselves “It’s just a movie,” we run with it, even as Chev is impelled to run through LA streets with a magnum erection thinly covered with a hospital gown that keeps flapping open to reveal his taut buttocks for the laydayz.

But the Bond Villain stopgap Methods Of Prolonged Murder attain teeth-grinding proportions and by the final scene, when Chev confronts Verona, we ask ourselves why Verona, an impulsive gangland hitter (who by this stage has gone foaming-mouthed mental over Chev killing his brother and scarfing his bling), does not simply pump Chev full of shrapnel when Chev is standing there unarmed, surrounded by Verona’s gang. Instead, Verona opts to courteously inject Chev again, then scream at him to die, with lots of swearing. That oughta help – more so than the GUN Verona carries in his other hand.

I don’t know whether I was laughing because the movie was genuinely funny, or because I was on that knife-edge of popcorn straightjacket myself…

Jason Statham has made the transition well from UK Hard Guy to US Hard Guy, insinuating himself into the Los Angeles gangsta kulcha with only a slight doctoring of the Brit accent, his visage simply yelling American streetfighting hitman. His TRANSPORTER movies set him up for this kind of savage action, but nothing could prepare him for this kind of illogical storyline.

Eve (Amy Smart) is Chev’s small-minded strawberry-blonde fluff, about as smart as Jack Nicholson in ONE FLEW OVER THE CUCKOO’S NEST – after the lobotomy; the type who applies lipstick obliviously, whilst in her peripheral vision, Chev beats a prospective assailant without her knowledge… Only in LA…in the movies… in a blonde’s bedroom…

The sex and violence is heavy duty, brazenly overstepping the boundaries of what the hypocrites call “good taste.” But good taste – by its definition – is what tastes good. And when Chev brutally bangs Eve in front of a leering Chinatown crowd to keep his heart rate bangin’ – now that’s just plain creamy Christian goodness!