Remake of the 1973 George A. Romero movie of the same name, THE CRAZIES is a simple, shallow, well-made thriller. A virus drives the people of a bucolic Midwestern town crazy and they start killing people. I don’t mean to nitpick, but killing is kinda natural for a species that kills to eat, to mate, to survive. You know what would really be crazy? A virus that made you paint your house. 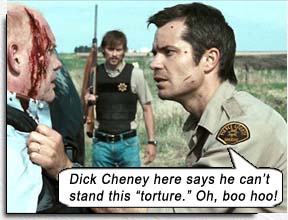 I can’t compare the two versions, not having seen the Romero film, though in reading about it, we can discern how Romero’s ham-fisted, no-budget execution subsumed his sociological commentary. The Romero version shows the military as becoming a bigger problem than the virus problem they were sent to solve; as reviewer Michael Atkinson puts it: “The Ashcroftian governmental cure out-terrorizes the disease.” Yet that version is hobbled by its usual Romero non-acting. Again, I cannot speak with authority, so check it if you have two hours of life to throw away.

Me? One THE CRAZIES is more than enough derangement.

This 2010 version has the same military plane going down, releasing its cargo of deadly bio-weapon virus, but after the fervor that has grown up around America’s deadliest, most useless arm of government, the military who arrive to clean up their mess here do not exacerbate the problem but are merely callous authorities that Our Heroes must escape. Bedecked in ominous gasmasks and hazmat suits to terrorize civilians just right.

Timothy Olyphant is David, the Sheriff of this town where, like CHEERS, everybody knows your name; the man he must shoot in the film’s first minutes (for going, uh, crazy), he addresses by his first name. His doctor wife is Judy (Radha Mitchell), Danielle Panabaker is Judy’s intern, and Joe Anderson is Russell the deputy, a likeable, dependable redneck (how many times can anyone say that?). These four are unaffected by the virus and escape the town and the military who are trying to kill or quarantine them.

The film’s one touching moment is when Russell realizes he is affected by the virus. Instead of being left to die in the wilderness, or killed immediately, he asks David and Judy, “Can I walk with you guys awhile?” That’s so sad. His performance at that moment captures that human need for others of our kind, the universal truth of fearing to die alone. For a species grown so inured to killing, that vestigial aspect of our nature is our great irony.

THE CRAZIES is the usual romp of jump-scares and gross-out killings and people with makeup that looks like a KFC factory exploded on their faces senselessly trying to kill other people (kinda like zombies; thanks, Romero – what an “original” idea!) and everyone saying “fuck” whenever they want, garnering an R-rating. Now remember kids, excessive gore alone can still warrant a PG-rating. THE CRAZIES is rated R because of its swearing. In other words, the gory mashings of skulls or the pitchfork through the torsos, or the knife through the sheriff’s hand which he succeeds in slamming through the throat of his assailant while it is still through his hand, do not by themselves garner an R-rating; it’s because the filmmakers chose to retain their frequent use of a word which is a euphemism for the act of procreation.