We meet Bad Blake (Jeff Bridges) getting out of his van after a long drive, his belt buckle and fly undone; he pulls a plastic bottle out of his car and empties the pee. It’s The Dude! 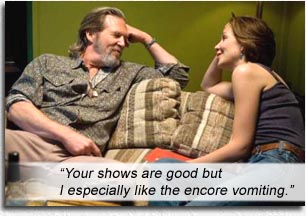 The star of THE BIG LEBOWSKI (1998) brings his Dudeness to CRAZY HEART, the tale of a country music singer-songwriter. Unlike Jeff Lebowski, Bad Blake is slightly older, slightly more talented, and slightly more confused. He’s 57, he’s had the hits, he’s had the fame, he’s played “sick, drunk, divorced and on the run,” and he’s on the road for what may be his last tour, considering he’s playing bowling alleys and toilet pubs with pickup bands. Alcoholic, smoker, tail-chaser, burnout, he instinctively feels this is the road to nowhere, but meets a vivacious young female journalist (Maggie Gyllenhaal) who turns it into his road to redemption. (Shed tear here.)

CRAZY HEART is compelling for the performance of one man – Jeff Bridges. He has always been a marvel to watch, from his simplistic toyishness in TRON, to his naturalistic disarray in THE BIG LEBOWSKI to his presidential mien in THE CONTENDER; here we feel the weight of his experience and road warrior grit in a performance that leaves us amazed. There is a harsh scene where Bad tries to connect with his estranged son on the phone, which leaves us with a cold stone in our guts.

Maggie Gyllenhaal, as always, brings a smile that can defeat armies and crush rainbows. As Jean, music journo for a local paper, she interviews Bad and ends up victim to his musician charisma (i.e. she beds him quicksmart, like any old groupie).

The writers (director Scott Cooper, and Thomas Cobb) try to imbue Jean with a wifely charm and weigh down her character with import and a young kid, but Bad ultimately means nothing to her if she can’t accept his foibles without pouting and imposing conditions on him. And she ultimately doesn’t mean much to Bad either, for when she entrusts her son to him, he loses the boy during a pub stopover, his “drinking” supposedly the cause of his inattention.

Besides his Dude-ish interaction with his road manager (Paul Herman – “Beansie” from THE SOPRANOS), there is a comical and endearing relationship between curmudgeonly bar owner Wayne (Robert Duvall) and Bad, who are such comfortable old friends that when Wayne walks into Bad’s house, yelling for him to get ready for a fishing trip, upon finding Bad unconscious on the bathroom floor – a serious matter for most people – Wayne chuckles to himself, “Not again!” and nudges Bad awake, telling him to get dressed and that he’ll be waiting in the car.

Eventually, after one bender too many, a car accident and a doctor’s life-alert warning, Bad calls Wayne and says, “I wanna get sober,” which is the downright most ignorant thing anybody, alcoholic or otherwise, could possibly say. Because we’re all born “sober” – you “get” drunk! The funniest thing about alcoholics (no, it’s not falling and hitting their head on the edge of the table, or vomiting on the buffet, or taking their pants off and pissing in the fish pond) is the legitimacy they place on that statement. How can you “get” sober if you’re ALREADY sober before you start drinking? You have to actively do something to get drunk. So if you want to be sober (not “get” there!), just don’t do that thing that makes you drunk! An industry has formed around telling these people that their weakness and stupidity is a “disease” and “it’s not their fault.” And when they “get” sober (snigger!), they’ve then got to travel a whole ‘nother road of stupidity, admitting that a “higher power” got them there. Really, what kind of faith can you place in a higher power that couldn’t stop you getting shitfaced in the first place?

Colin Farrell is Tommy Sweet, overdosing on Too-Cool-For-School ‘tude. He’s an ex-member of Bad’s old band, Bad’s Boys, and we don’t realize why Bad hates him so much at first, because he is nothing but a sweet, courteous man who never forgets to cite Bad as his mentor and the talent that started him. We realize Bad must have been simply shallowly jealous of Tommy’s success away from his skirts.

The musicality and synch is well done, and Bridges, Farrell and even Duvall all give voice to their own performances, carrying tunes well. Only one scene spoils the movie’s musical accord. While sound checking for an arena show, Bad complains about the front-of-house sound – from the stage! Shouldn’t he know better after 50 years? When soundman Bear (J. Michael Oliva) says “The mix is good, man. You can’t hear what I’m hearing out here,” Bad replies, “You’d be surprised.” What the hell is that supposed to mean? He has a disembodied spirit self out in the FOH sound booth? How can he POSSIBLY hear the FOH mix? Why didn’t the filmmakers just have him argue with the foldback engineer? If Bear is providing a FOH mix to the performers (through their foldback monitors), then Bad can complain. But Bear just said, “out here” meaning there are two different mixes – the front-of-house mix and the stage mix.

Now I’m not in any way standing up for sound engineers: all of them ARE frustrated musicians/ douchebags, and they DO – as Bad says – “try to fuck up the opening act, makes the headliner sound that much better,” but they don’t do this actively. They’re just too apathetic to be competent. Through a combination of jealousy, arrogance, laziness and hubris, they throw up a mix that they believe an act should sound like, usually not even marking the levels that they’ve set during soundcheck, so that during the actual set, it will sound different anyway. Pricks!

Still, that’s no excuse for the senseless exchange between Bad and Bear.

“Pick up your crazy heart and give it one more try…” The original songs are penned by T-Bone Burnett. Bad ends up writing and selling songs to Tommy Sweet, this title track being a big hit, creating much income in a time of sobriety. What to do with the cash – except create a sappy ending?

16 months after being dumped by Gyllenhaal’s smile, Bad runs into her at a gig. She’s got a ring on her finger. And yet, out of niceness, kindness, senility(?), he gives her a huge check he just received – to put into the bank for her kid. Maybe he’s a little more civilized than me, but isn’t the financial wellbeing of her kid the responsibility of the guy who put that ring on her finger?

The Dude needs to get a grip on that crazy heart.