Monsters as men and chicks as objects.

Not much depth in this Lagoon… Scientists discover a prehistoric “gill-man” in the Amazon. And kill it.

A linear, basic monster thriller, CREATURE FROM THE BLACK LAGOON, opens “scientifically” by narrating the cooling of the Earth and alluding to evolution to set up the premise that there may be unknown species skulking deep in uncharted jungles. Then when our “modern scientists” actually discover one of those unknown species – they kill it. Thankfully, only B-movies were this stupid in the 1950s; if real scientists behaved like these negligent pea-brains, the Earth would still be flat. 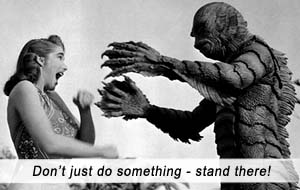 In the film’s opening scenes, they “study” a fossilized Gill-man hand by standing around it and averring, “I think it’s from the Pleistocene.” “I think it’s Devonian.” “I think it’s over one million years old.” Hey, Scientists, here’s a thought: ACTUALLY EXAMINE IT.

How dare any Americans laugh at Japanese GODZILLA movies after creating this wild piece of trash cinema?

CREATURE FROM THE BLACK LAGOON, though iconic, is a product of its misogynistic, racist age, and – like KING KONG (1933) before it – another example of press junkets filling in the “beauty and the beast” trope in lieu of the inarticulate filmmakers conveying it onscreen. It was chilling if you hadn’t seen anything like it before, but is merely a B-movie that has grown in reputation due to the dearth of quality horror films to compare it to at the time. (It’s not like humans couldn’t make good movies in 1954 – to whit: SEVEN SAMURAI, ON THE WATERFRONT, CAINE MUTINY, et al). This stinker stood out from the pack because of its uniqueness. But in reality, it’s as lame as a guy in a rubber suit stomping on Japan.

We can forgive the actual rubber suit (worn by Ben Chapman on land and Ricou Browning underwater) because these daring filmmakers did the best they could with what they had – fantasists out on the edge, creating tales of amazement from whole cloth; we can even forgive some of the inculcated racism and misogyny (products of their time) – but we cannot forgive the simplistic story that was embellished by the press junkets and not actually told in the film. Nor can we forgive the outmoded anthropocentrism that saturates the film at such a base level, that I need to apologize for the human species to any and all aliens reading this.

For instance, the Gill-man is not a “monster” – or even a “creature” (which implies “monster”). He is an organism that has evolved to fulfill a niche in his ecosystem. That point is never, ever broached by the supposed “scientists” (Richard Carlson, Julia Adams, Richard Denning, Antonio Moreno, Whit Bissell). Yes, he kills humans. But it is NEVER EVEN CONSIDERED that maybe he is killing them because they are in his territory; everyone takes it for granted – filmmakers and audiences of the day – that he’s killing for no reason. We know the filmmakers don’t have the brainpower to understand ecological niches, because earlier, Carlson speaks of a lungfish as “Nature’s way of trying to get onto land, and failing”– Let me stop you right there, idiot scientist! The lungfish has evolved into a niche that suits its way of life; it remains that way because it is so successful in its niche. Nature is not trying to get ON land or OFF it. This is the same Victorian thinking that believed Man was the apex of evolution and that everything in Nature was trying to “attain” Man-tastic-ness. 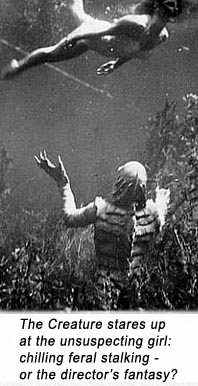 When the Gill-man is swimming under Julia Adams (gratuitously taking a sensual dip in croc-infested waters), it is chilling. I am seeing this act as that of an animal stalking its prey, yet the meme that has grown around this scene is chilling for its perversity. Reviewer Lars from drafthouse.com speaks for all the lemonheads who see this sequence as “the beast falling for beauty” when he calls the scene “oddly romantic.” So that’s romance? Sneaking up under an almost naked woman and staring up at her in lust? Yet there is that admission that something kinky is going on here by appending the term ‘oddly.’ Other reviewers speak of the Gill-man “falling in love” with the woman. So that’s what love is: lusting after an organism not even on your species line. Trying to kidnap that organism to – what? – mate with it? Gill-man, you know your non-human sperm cannot survive in her uterus, right? Love hurts…

And why is it taken for granted, inculcated in the minds of the day, that if a creature doesn’t kill a human female, it must be enamored with her? Anthropocentric arrogance! The countless movie posters depicting a humanoid carrying a female draped across its arms is nauseating: from THE DAY THE EARTH STOOD STILL, to THIS ISLAND EARTH, every single alien or monster movie felt the urgent need to fulfill this visual – as does CREATURE. In that age of systematically debasing and infantilizing women, there was that dichotomy of believing them so prurient and alluring to alien races that they could tame the hot blood of those antagonistic conquerors, yet – keep ’em shoeless in the kitchen.

What I see in the Creature, is the director’s sexual repressions let loose. The monster here is the man behind the monster, i.e. the director, Jack Arnold. What can we make of Julia Adams (easily the best pearbottom you will see in ancient filmdom) wearing a different sexy outfit in every scene? Like Mrs. Howell on GILLIGAN’S ISLAND, she packed heavy for this three-hour tour… What can we make of that “oddly romantic” pervert underwater scene? (“Yeeeah! That’s it! Swim along the top of the water while I ogle you from below! Yeah! Flap those long legs, honey! Lemme see that pearbottom in action!” All that’s missing is drool and a raincoat.) Can we blame this film’s director alone? Movies were a medium where every director got his ya-yas out (without having to rock a raincoat) by making aliens and monsters objectify women like the second-class citizens they were so obviously regarded as, beating them, unable to communicate with them, grasping for understanding through unrequited “love,” and bearing them in arms like helpless sexpots. Look up “sexual inadequacy” in any 1950’s Webster Dictionary – there’s a picture of a horror movie director.

And where’s the racism? you ask. It is so ingrained in the fabric of this movie, we can hardly see it. But consider that no less than four South American aides are killed by the Gill-man during this expedition. The scientists yet stay the course. It is only when the white scientist is injured (Whit Bissell) that Richard Carlson suddenly gets religion, “We gotta get outa here before more people die!” You mean before more WHITE people die. That was the catalyst – it didn’t matter when the Gill-man killed those brownskins, now he’s turning to us WHITEYS! Let’s scram!

Acting is atrocious theatrical method, with all the principals standing facing the fourth wall during group conversations, and the Creature’s theme music – massive dissonant horn stabs – is like actual stabs into your cochleas.

Carlson wants to capture the Gill-man and bring it back to civilization, Denning wants to kill it and bring it back; no one – no one – considers studying it in its natural habitat. These “scientists” are unbe-frickin-lievable! Denning keeps spear-gunning poor Gilly – and I feel a sadness when I see the pathetic looks on the Gill-man’s face as he seemingly gasps for air, but I know – I know – that audiences of the day were meant to stand and cheer whenever Gilly gets harpooned.

After being tormented by the humans, you’d think Gilligan would be happy when they decide to scram his island, but he blocks their exit from the lagoon with a fallen tree. I guess he really wanted to try impregnating the society chick. And if so, it means the filmmakers might, in fact, have been going for the trope of the tragic Beast lusting after the unattainable Beauty. Which means I still can’t figure whether the last frames of the shot Creature sinking beneath the water is tragic or triumphant.

Oh, the horror… of human stupidity…