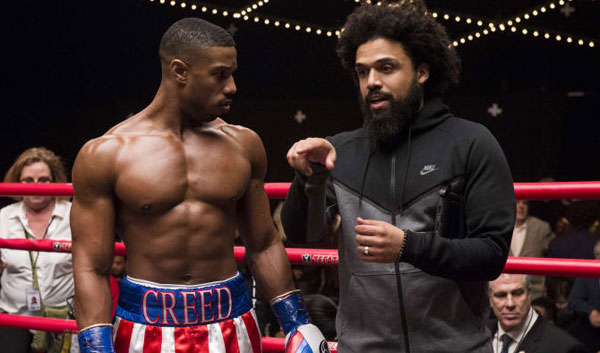 Director Steven Caple can’t resist asking Michael B. Jordan if he can poke his nipple just once.

Uh, to get a concussion?

The mixed messages come like a roundhouse to the chin in CREED II, the bastard child of ROCKY, ROCKY II and ROCKY IV. Beat for beat, Creed for Creed, Drago for Drago.

The son of Apollo Creed, Adonis, takes on the son of Ivan Drago, Viktor. It’s almost too clever-clever for its own codpiece. For those old enough to remember the bruising, Apollo Creed died in the ring at the hands of Ivan Drago in 1985’s ROCKY IV. It took Rocky Balboa to even the score (somewhat) by defeating Ivan Drago on his own Russian turf.

Ivan not only lost the bout, but lost his wife and his country. Shunned by mother Russia, exiled to the Ukraine, decades of bitterness, he raises a son in cruel training for the purpose of weaponizing him against his lifelong enemy – Rocky. Now, with Adonis Creed winning the World Championship Dance Belt, under the tutelage of Rocky, Ivan sees a path to revenge against Philadelphia’s favorite son: his boy would clobber Rocky’s boy…

Thus, the plot of CREED II is predicated on a helluva lotta chances that lined up in favor of Ivan Drago: if Adonis had not become a boxer, and if Rocky had not trained him, then Ivan’s singular goal would have collapsed, stuck with a killing-machine son with no one to punch. Beating Adonis without Rocky at the helm would mean nothing – after all, Ivan had already killed Adonis’s father in combat; nothing left to prove. (Or was Ivan contemplating bringing his son to America anyway, to challenge whoever the Wurl Champeen was? Doesn’t seem that way – for 20 years he pretty much banked on Creed and Balboa following the exact path they were on, and voila! Plot Convenience heaven! With luck this good – forget Philly, hit Vegas!)

When the Dragos arrive in Philadelphia, they cast their gaze derisively on Rocky’s statue – shown correctly placed at the foot of the Philadelphia Art Museum steps, where they also see doofus tourists running up the steps emulating Rocky…

There’s something fun in CREED II paying homage to the legacy of the ROCKY franchise, but then, where does self-plagiarism overtake homage and bash it over the head and take its lunch money?

3o-year-old Michael B. Jordan (probably too good an actor for this role) is once again Adonis “Donny” Creed, all muscle-on-muscle obsidian dynamite; Viktor is 28-year-old Florian Munteanu, a 6’4” real life German-Romanian boxer, nicknamed “Big Nasty”; Sylvester Stallone, now 71, reprises his role as Rocky – but he is now Mickey! (Two years older than Burgess Meredith in 1976’s ROCKY!); and Dolph Lundgren, now 60, had to brush up on his Russian to play Ivan Drago. 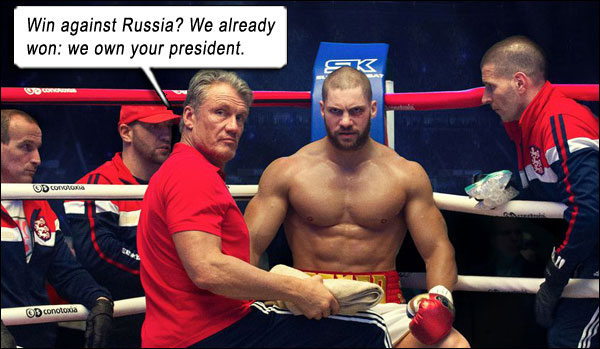 Cool seeing Stallone and Lundgren share the screen again as mortal enemies, Rocky and Ivan, and kudos to the film for spending time on their strained relationship, as all the relationships in the movie are given close focus: between Adonis and his fiancé Bianca (Tessa Thompson, playing a partially-deaf musician, looking too much like Lisa Bonet for her own good), and Adonis’s mother (Phylicia Rashad), as well as a subplot between Rocky and his estranged son Robert, which is resolved poignantly in the film’s final frames. Milo Ventimiglia reprises his role as Rocky’s son, and all I could think of is the tragedy that Stallone’s real life son, Sage (who excelled at his film role of Rocky’s son in 1990’s ROCKY V, and died of a heart attack in 2012) was not here, and how Stallone must be going there in his head to find that emotion of a truly lost son…

Surprisingly, the filmmakers (writers Stallone and Juel Taylor, and director Steven Caple Jr.) also redeem the ostensible villain, Ivan Drago! They show us Ivan’s ex-wife (Brigitte Nielsen, still statuesque, but tainted by that stint on FLAVOR OF LOVE – Jesus Christ!), haughtily married to some Russian statesman, looking down her nose at Ivan’s attempts to crawl back into Russia’s good graces by offering their son as champion against America. She takes the brunt of all the bad vibes of the Dragos onto her shoulders, as the woman who walked out on the father; now she would walk out on her son after his final bout, wordlessly, unforgiving, while Ivan – who had nothing but derision for his son’s efforts throughout the film (“You are embarrassing us and you are embarrassing Russia!” “You’re here to win – Why is he still standing?”) – suddenly tells Viktor at a low moment, “You did good. It’s okay,” and for some reason our tears flow…

All these poignant elements elevate CREED II to something more than just a “boxing movie,” and there are good visual directorial choices, with excellent production values throughout, the boxing faster and boomier than ever (with some real punches taken in those slomo shots, with skin shuddering and jaws misaligned!); and of course, Jordan’s acting is monumental, especially his portrayal of broken ribs – but the messages of Why We Fight just muddle the puddle. No surprise, as there IS no good reason why boxing exists in modern sports. Any rationale for why grown, cognizant men would beat each other with intent to addle the other’s brain into unconsciousness, without any malice aforethought – has got to run up against cognitive dissonance. While watching the movie, everything Rocky says seems to make sense, but as soon as you leave the theater, you realize he’s bashed you over the head and taken your lunch money.

For example: Rocky asks Adonis why he wants to fight young Drago, who challenged him for the Dance Belt. (At the weigh-in, father Ivan gets in a dig at Adonis, smirking at him, “You aren’t as big as your father.” Picture it: the man who killed your father – “If he dies, he dies!” – is now poking YOU?! Nah-uh!) Any wonder Adonis tells Rocky it’s about revenge! Rocky tells him it’s the wrong reason, and if he fights for that reason, Rocky won’t train him.

Thus – Adonis fights without Rocky in his corner – gets mangled – blames Rocky for not training him! (dude, YOU walked into that ring of your own volition; no one forced you!) – and has to find the “right” reason to get back in the ring for a rematch. Is it starting to sound stupid to you too?

Let’s talk about Rocky’s supposed “wrong reason”: He tells Adonis not to do it for revenge – yet in ROCKY IV, that was the exact reason Rocky did it – and won!

So the “right” reason is apparently “for your own honor.” But isn’t fighting for your father’s honor a good thing? How many other movies have declared that message loud and clear? To drive home the “honor,” Adonis didn’t even lose his fight to Viktor, but won on a technicality even though he was mashed. So he is still Wurl Champeen! He doesn’t even have to get back in the ring.

Fuck off. What more honor does the World Champion need? Earlier, someone advises Adonis, “The belt’s not enough, You have to have a narrative that sticks to the ribs.”

You mean my broken ribs?

(SPOILER: No matter the mixed message, they stick to it like barbecue ribs: Viktor himself is fighting for revenge for his father, so doesn’t win either of his matches against Adonis. An underlying point that may go unnoticed.) 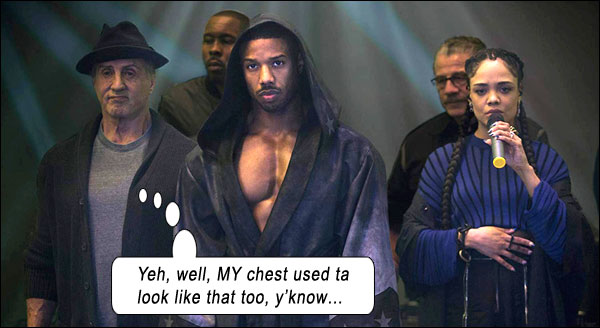 Nonetheless, into Act III we stumble, headfirst into the Training Montage. The re-match will be held in Russia – ‘No’ is not an option. Uh, why not? Because.

Rocky and Adonis do not reconcile with any cringey pep speech; Stallone, while sticking to the age-old Inspirational Movie format, has learned not to cornball it.

Out to some distant rawdog desert training ground they go, Rocky and Adonis, with Wood Harris along as 2nd trainer (he’s the son of Duke – Tony Burton, Apollo’s ringman; you know him as the “Noooo!” guy in slow motion).

Remember, kids: don’t fight for your father’s honor, or your girlfriend’s honor, or your country’s honor; just fight to aggrandize yourself… uh, did that come out right? (Which is what the filmmakers should be asking themselves.)

CREED II is basically the first two ROCKY movies mashed together with the character from ROCKY IV, and there are constant dialogue callbacks (“He’s just a man – be more man than him!” “This guy – he’s dangerous–” “I’m dangerous!”), yet movie retains its own character due to the “street” soundtrack; so amazing how music can affect how we perceive a visual film! Once again, composer is Ludwig Göransson. And we do hear a snatch of Bill Conti’s infamous Gonna Fly Now during a match – you can guess which part of which match.

We “feel” it’s Michael B. Jordan’s franchise now, we sense the passing of the torch, with the soundtrack moving away from the orchestral feel of the ROCKY era and into the hip-hop/orchestral. Stallone has stated this is “his last rodeo” as Rocky Balboa, and that Michael B. Jordan will “carry the mantle now.” We can only hope that Steven Caple, or Ryan Coogler (who is to Jordan what Scorsese was to De Niro, who couldn’t direct here due to schedule) will make the ongoing tale of Adonis Creed as lovable and compelling as that of Rocky Balboa.